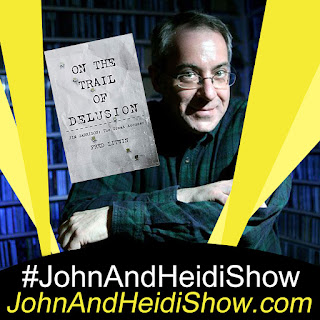 In his timely and powerful new book, On the Trail of Delusion, author Fred Litwin turns the tables on conspiracy theorists with a rock solid and well-researched scenario of President John F. Kennedy's assassination that debunks the conspiracy theories of district attorney Jim Garrison, exposes the nonsense behind Oliver Stone's film JFK, and offers restitution for the lives that were destroyed through false claims. https://amzn.to/3k3tOJN

A survey from the Netherlands found that the human brain is wired to seek out junk food. (https://bit.ly/3nH2Zxu)

A new survey finds that national chains like McDonald’s and Chipotle have seen their profits soar during the pandemic while locally owned businesses continue to struggle. (https://on.wsj.com/34Lnn7T)

Patrons at a 7-Eleven in Florida were treated to a lewd display by a 28-year-old woman who allegedly exposed and pleasured herself near the front doors of the convenience store. Police allege that Vanessa Lee Jones did “intentionally masturbate” while outside a 7-Eleven in St. Petersburg. Jones was arrested for lewd and lascivious exhibition, a felony, since she allegedly “continuously rubbed her vagina” in the presence of a minor. Jones was observed by the child’s uncle, who “video recorded the incident, which was shown to law enforcement.” Jones, who denied engaging in any illicit behavior, is locked up in the county jail on $10,000 bond. In recent months, Jones has been convicted of trespassing and possession of synthetic marijuana. (https://bit.ly/3iQktnz)

“Real Housewives of Orange County” star Kelly Dodd married “Fox News” reporter Rick Leventhal in California on Saturday. This is the third marriage for each of them. (https://pge.sx/2SIkrTU)

Billy Bush says he felt betrayed by Matt Lauer for leaking the Access Hollywood Tape where he was heard joking with President Trump. (https://pge.sx/34tS8y5)

Why do we eat popcorn in movie theaters? One possible reason: During the Depression, popcorn at 5 or 10 cents a bag, was one of the few luxuries down-and-out families could afford. An Oklahoma banker who went broke when his bank failed bought a popcorn machine and started a business in a small store near a theater. After a couple years, his popcorn business was booming.

Pumpkin production is widely dispersed throughout the United States, with crop conditions varying greatly by region. All states produce some pumpkins, but about 40 percent of pumpkin acres are grown in five States: Illinois, Pennsylvania, Indiana, Texas, and California. Illinois harvests twice as many pumpkin acres as any of the other top states. The largest pumpkin ever grown was 2,624 pounds, by a Belgian horticulturist. The largest pumpkin ever grown in the U.S. weighed 2,528 pounds and was grown in New Hampshire.

Doctors in Kyrgyzstan removed a nine-pound hairball from the stomach of an teen after she could no longer eat or drink. The ball developed over years as she chewed the ends of her hair and ate hair off the floor.

A year-long government audit has led to an arrest in what investigators said was the theft of $1.3 million in printer toner from the public library in Austin, Texas. The accused thief, Randall Whited, worked for the library and was in charge of purchasing supplies with little oversight. Auditors with the city of Austin said that during their investigation they uncovered evidence Whited was selling the stolen toner online. He bought ten times more toner than the library needed, according to the audit released Monday. “It’s probably the biggest fraud investigation the city audit has had by about two folds,” said Brian Molloy, chief of investigations for Austin's Office of the City Auditor. Molloy believes the bulk of the stealing took place between 2015 and 2019, the year Whited was fired. (https://fxn.ws/34zdie7)

A Pennsylvania man has been accused of plotting to kill his wife by rigging a tripwire at the top of a staircase inside their home. 60-year-old William Joseph Dankesreiter Jr. allegedly installed a fishing line in the hopes that his wife Laura would trip on it and fall down the stairs to their basement. “It was obviously thought through,” State Trooper Stephen Limani told the outlet. “There was nothing accidental about this.” According to court documents, the sick scheme nearly worked, when, on Saturday morning, Dankesreiter’s wife headed to the basement to get something from a freezer for breakfast. Thankfully, she was able to catch herself before tumbling down the stairs. Dankesreiter got home as his wife was speaking with the troopers, who arrested and charged him with attempted homicide, aggravated assault, simple assault and reckless endangerment. (https://bit.ly/3jzPywN)

A Florida woman was arrested after she turned a bag of methamphetamines over to police and complained that someone sold her “junk.” FLORIDA (https://bit.ly/3laH3sg)

Man Trapped Under Tree For 4 Days Is Rescued