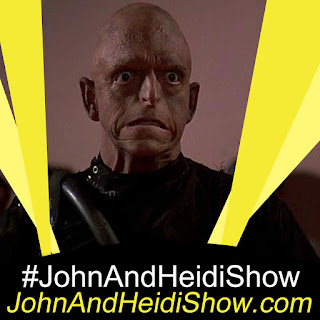 Today we visit with actor Michael Berryman. This could be a #MovieStarMonday guest, but we wanted to visit with him before Halloween. Michael has been in MANY blockbuster movies like One Flew Over The Cukoo's Nest and Weird Science... in addition to many SCARY films like The Hills Have Eyes.

Scientists are developing a robot dolphin that could replace captive animals at our nation's theme parks. (https://reut.rs/3j0RIV2)

A survey asked, “When buying Halloween candy, do you buy extra for yourself?” Just over one in four of respondents replied yes.

Last Friday at 1:55 a.m., firefighters arrived at the scene of a DUI crash involving a Maryland State Police cruiser and a building. A Chevy pickup struck the police SUV first, and then headed right into a East Coast Investments office building. At that point police apprehended the driver of the pickup, Dayton James Webber of Charlotte Hall, who just happened to be a quadruple amputee. Hall will be charged with driving while under the influence of alcohol, driving while impaired by alcohol, negligent driving, reckless driving, and failure to remain at the scene of an accident. (https://bit.ly/3m6lMR0)

A Boston school teacher was fired for appearing in the Adam Sandler movie “Hubie Halloween” because it violated her contract. (https://bit.ly/3jauFqP)

The Cameron Peak fire in Colorado is now the state's largest wildfire in history.(https://bit.ly/3dt46fk)

A Federal Judge ruled that people in jail can now receive stimulus checks.(https://bit.ly/31c2Qbz)

A man flying in a jet pack has been spotted above Los Angeles International airport for the second time in a week. (https://bit.ly/3duQIHx)

A survey found during the working week, the first alarm goes off at 6:40AM — but only one five people get out of bed at this point.… Three in 10 said checking social media is the first thing they do as soon as they wake up, while one in ten catch up on work emails right away. Almost half of us hit snooze once. 20 percent of us hit it twice or more. Fewer than 50 percent of us make time for breakfast everyday — partly because we’d rather hit snooze and catch a few extra minutes of sleep.

I’m sure we have all had sore throats that feel like we swallowed a cactus. But can you imagine what it would feel like to have a 1.5-inch nail lodged in your esophagus? This is what a seven-year-old Istanbul, Turkey, girl had experienced when doctors discovered a large nail in her neck as doctors prepared to remove her tonsils. The girl reportedly began complaining of sharp throat pains around the age of two. Doctors believe that is when she swallowed the nail.

McDonald’s once made bubblegum-flavored broccoli. Unsurprisingly, the attempt to get kids to eat healthier didn’t go over well with the child testers, who were “confused by the taste.”

The 2,000-year-old figure of a relaxing cat has been found in the Nazca Desert in Peru. (https://bbc.in/3kpCPwU)

The Lyon County Sheriff’s Office in Nevada arrested a man after he was found living in the ceiling of the Raley’s grocery store. Sergeant Dan Lynch said that 35-year-old Matthew Hammar had fallen through the tile in the ceiling and had crawled back into the crawlspace while employees were preparing to open the store just after 5:00 a.m. on September 30th. Employees called authorities who surrounded the store. After a while, they got him to come outside and he was arrested for commercial burglary. Authorities said Hammar had been living in area above the deli for at least a couple of days, and had been stealing food from the store. They say they found some of his property in the rafters. (https://bit.ly/31lXMRU)

Police in Memphis, Tennessee say an angry customer at a KFC restaurant put innocent lives in danger because there was an issue with his order. Investigators say that customer went through the drive-through of a KFC on Saturday, then went back to the restaurant minutes later because his order was wrong. Investigators say the man got out of a semi-truck he was driving and walked up to the drive-through window demanding a refund. Surveillance video shows an employee giving the man his money back but, according to police, the customer was still upset and fired shots into the restaurant while driving away. The bullets shattered a side window and penetrated several walls. Thankfully, no one was hit by gunfire. Investigators are still looking for that customer. They posted pictures of him and the semi-truck he was driving on social media. (https://bit.ly/3lWTto1)

Man Tweets 'I Am Not Ok' And People Around The World Rally To Show Their Support
https://www.sunnyskyz.com/good-news/4003/Man-Tweets-039-I-Am-Not-Ok-039-And-People-Around-The-World-Rally-To-Show-Their-Support