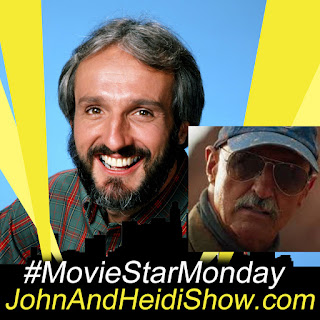 It's a #MovieStarMonday as we visit with Michael Gross (Family Ties, ER, many more) he's in a NEW FILM Tremors: Shrieker Island, the 7th installment of the franchise presented by Universal 1440, is available to own on digital and Blu-ray.
Available now - https://zcu.io/rUjZ

A new study found that diet drinks have been linked to cardiovascular issues. (https://cnn.it/31Ls9l4)

A study at Colorado State University is testing students wastewater for signs of COVID-19. (https://n.pr/3ovIxA3)

A guilty plea is entered over cocaine found in someone’s buttocks. 25-year-old Mahad Mahamud Mohamed of Rochester, New York pleaded guilty to second degree drug possession. He was arrested after a traffic stop on December 13th, 2018. Authorities say a teen in the car with Mohamed was searched and law enforcement says cocaine was found in his buttocks. Mohamed is accused of telling the teen to hide the drugs in his pants. Mohamed is scheduled to be sentenced on December 7th, 2020. (https://bit.ly/37KnmUN)

Notoriously reclusive "Two And A Half Men" star Angus Young left his Los Angeles home to watch firefighters extinguish a blaze on his block. (http://dailym.ai/3kDFQdd)

Meryl Streep’s nephew was caught on surveillance camera getting into a road rage fight in the Hamptons with another motorist. (http://dailym.ai/3e1TjJh)

Caitlyn Jenner is going to return to acting in a sitcom based on the notes of the late actor Dick Van Patten. For those of you not familiar, Dick Van Patten starred in “Eight Is Enough.” (https://bit.ly/3mtiXJY)

A British researcher said his study indicates using swear words increases a person’s tolerance for pain. The researcher (Keele University) said he compared the pain tolerance of 67 students of both sexes when they each dropped a hand into ice-cold water. He said most of the subjects found their pain tolerances increased when they were allowed to exclaim swear words as opposed to neutral language.

A guy in China was arrested for theft. The man, accused of pickpocketing passengers on a city bus, collapsed at the police station and refused to open his eyes or talk for eight hours. Doctors were brought in to check the man out and confirmed that he was still conscious. On top of that, witnesses said the suspect had coughed a few times.

We’re supposed to change our internet and social media passwords at least every 90 days. But what about real-world expiration dates?

• Pillows should be trashed every year

• Get a new toothbrush every 3 months

Want better sex? Research suggests you should do your share of the housework before getting down and dirty. A study (University of Alberta) found couples enjoyed more frequent and satisfying sex when the housework was split equally.

Johnny Appleseed’s fruits weren’t for eating. Yes, there was a real John Chapman who planted thousands of apple trees on U.S. soil. But the apples on those trees were much more bitter than the ones you’d find in the supermarket today. “Johnny Appleseed” didn’t expect his fruits to be eaten whole, but rather made into hard apple cider.

The UK Police Chief is warning that any Christmas party that gets caught violating COVID rules will be broken up. (https://bit.ly/3kGfJ5p)

A dispute between bond king Bill Gross and his next-door neighbor over a $1 million-dollar outdoor sculpture has devolved into police calls to their Laguna Beach mansions, multiple legal actions — and allegations that the billionaire investor blared the “Gilligan’s Island” theme song on a loop at all hours to annoy his neighbor. The Pimco co-founder and his partner, former professional tennis player Amy Schwartz, are being accused by tech entrepreneur Mark Towfiq and his wife of harassment and intentional infliction of emotional distress. The cause? A 22-foot-long blue glass installation — and an even bigger pole and netting structure erected to protect it — that Towfiq said blocked his view, prompting a complaint to the city. Neither Towfiq nor Gross agreed to be interviewed, according to their representatives. (https://lat.ms/37SiwVA)

An argument over a chess game in Connecticut resulted in one man being stabbed in the buttocks, but no arrests have been made in the case. Sergeant Kenneth Jarrett said police were called to an apartment on Mohawk Court on the report of an assault after 5:00 a.m. Saturday. The 51-year-old victim said he knew only the first name of the man who stabbed him, and refused to give police any more information. “Nobody wanted to say anything,” Jarrett said. “They were playing chess. they got into a small argument and somehow the victim got stabbed in the butt.” Jarrett said the owner of the apartment called 9-1-1 to report that a friend had been stabbed. (https://bit.ly/3mshNi6)

A Port St. Lucie woman was arrested for shoplifting at Wal Mart after putting a 12 pack of Coors Lights in her 5 year old daughter’s Barbie Backpack ….. FAKE NEWS

A Carpenter Is Building Insulated, Mobile Shelters For Homeless People To Stay Warm This Winter
https://www.sunnyskyz.com/good-news/4013/A-Carpenter-Is-Building-Insulated-Mobile-Shelters-For-Homeless-People-To-Stay-Warm-This-Winter