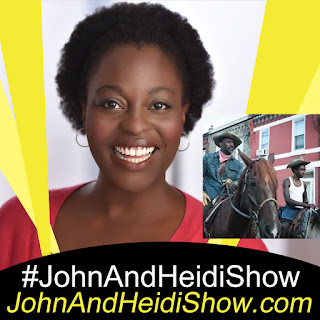 Today we visit with Liz Priestly. She's in Concrete Cowboy, a new film with Idris Elba, Caleb McLaughlin, Jharrel Jerome about A teenager who discovers the world of urban horseback riding when he moves in with his estranged father in North Philadelphia. Based on a true story. https://www.imdb.com/title/tt8846176/?ref_=nm_flmg_act_1

A study in Journal Pediatrics found that child YouTube Influencers are stealthily promoting junk food to other kids by eating sugary treats in their videos. (https://bit.ly/3kCwqPh)

An alarming new study found that COVID-19 can cause mental decline in the brain equivalent to ten years. (https://reut.rs/3mv0TiH)

A woman was arrested for DUI after deputies caught her driving her Jeep on its rim and swerving into traffic in Florida. A Monroe County deputies said they saw 32-year-old Krystal Berglund driving her black northbound Jeep on the Seven Mile Bridge around 5:20 p.m. on Friday after receiving a be-on-the-lookout alert for a reckless car. The deputy said the driver’s side rear tire was gone and the Jeep was being driven on the rim, which was disintegrating and throwing debris onto the road. The deputy tried to conduct a traffic stop, but the Oregon woman kept driving and was seen swerving into oncoming traffic. Multiple cars had to take evasive action to avoid crashing. Berglund told the deputy that she wasn’t aware she was missing a tire. She was taken to jail and was arrested for DUI, reckless driving, and battery.(https://bit.ly/35x2OMI)

The babysitter in the new “Borat” movie says she feels betrayed because she thought she was participating in a real documentary about a young girl being groomed to marry a rich man and she prayed for the girl until the movie came out. (https://bit.ly/3mEYpP3)

Costco is pulling all merchandise from Thailand that are made with forced monkey labor. (https://bit.ly/2Tx2QyO)

A group of marauding monkeys are attacking tourists in the Indian town of Shimla. (https://yhoo.it/3oCaohN)

A man in China was so desperate to escape the constant fighting between his girlfriend and ex-wife that he robbed a store to deliberately get himself arrested.

A woman is going head to head with her homeowner's association after complaints were filed over her “inappropriate” Halloween decorations that show skeletons dancing on poles. Angela Nava lives in a community in Richmond, Texas. She received a letter on Sunday saying she has thirty days to remove the decorations. The letter said the decorations are “offensively positioned.” “It's modeled after an adult club,” she said. “We just really had a good time changing the scene up every night. Every night, we change the positions of the skeletons, and it's really been just a great creative outlet for me.” Nava said the idea came up during the early stages of the pandemic. She said since Halloween is this weekend, and falls before the HOA's deadline, she's going to leave her decorations in her yard. (https://abc13.co/2TAb21c)

There’s only one letter that doesn’t appear in any U.S. state name

Can you guess the answer to this random fact? You’ll find a Z (Arizona), a J (New Jersey), and even two X’s (New Mexico and Texas)—but not a single Q.

A UK Judge will rule on the Johnny Depp “wife beater” accusation on November 2nd, settling his explosive libel case against Amber Heard.(https://reut.rs/2HIfBUJ)

There are civic duties and there are motherly responsibilities – and one pregnant Florida woman fulfilled both Tuesday as she stopped to vote on her way to the hospital to give birth. She had already gone into labor by the time she arrived at the Orange County Supervisor of Elections Office in Orlando last Tuesday. Poll worker Karen Brinceno Gonzalez told Fox 35 that the woman had asked her husband to stop and vote on their way to the hospital. The wife reportedly waited in the car as her husband went inside, waited in line, and asked for poll workers to help his wife vote early. Gonzalez went out to the car, where she reportedly found the pregnant woman breathing heavily. She checked her ID, handed her a mail-in ballot and told her to send it in by 7:00 p.m. on November 3rd. “She said, ‘No! No! No! I need to fill it out right now,’” Gonzalez told Fox 35. “So, she filled it out. I gave her an 'I VOTED' sticker, and she was off to the hospital.” Eileen Deliz, another early voting clerk, told the Orlando Sentinel that it was a unique event for poll workers. (https://fxn.ws/3jL0kj3)

A plumber in Brunswick, Ohio reported being assaulted by a co-worker while on a job at 9:30 a.m. on September 28th. According to the victim, he called his boss for a second plumber to assist with installing a toilet at a home. The co-worker arrived and was complaining about the job. When the victim told the man to stop complaining and work, the man reportedly punched the victim in the mouth, causing an injury. There was no further information at the time of the report.(https://bit.ly/3e2PlQV)

A Pinellas Park man was arrested for making love to a stuffed OLAF toy inside a Target ….. FLORIDA (https://fxn.ws/3ovdt39)

Houston Mom Is Mowing Lawns For Free During Pandemic
https://www.sunnyskyz.com/good-news/4012/Houston-Mom-Is-Mowing-Lawns-For-Free-During-Pandemic