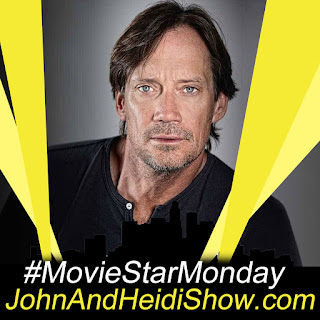 It's a #MovieStarMonday as we visit with Kevin Sorbo. He two new movies out and has numerous additional projects in the works right now.

The results of a survey:
Percentage of adults who think they are “above average” in honesty: 94

Percentage who say they are “above average” in common sense: 89

Percentage who say they are “above average” in intelligence: 86

Percentage who say they are “above average” in looks: 79

In Scotland, a guy was drunk and looking to pick a fight with the first person on the street who crossed his path. But when passers-by ignored the man he decided to have it out with a lamppost. As police officers watched, the man directed his drunken anger at the lamppost and shouted at it to “come and have a go.” He was arrested and ordered to pay for a new lamppost and perform community service.

Based on social media posts which include images, these are the top five Disney tattoos:
5. Lilo and Stitch

Want to look smarter? In a small study in the UK people who took their coffee black were seen as deeper thinkers than those who added sweeteners, syrups and other coffee drink add-ons.

When it comes to boosting your mood, research suggests exercise is the gift that keeps on giving and giving. In fact, the feel-good afterglow a workout brings may last far beyond the hour or so that’s been previously assumed. Researchers (University of Vermont, Burlington) said moderate intensity aerobic exercise improves mood immediately and those improvements can last up to 12 hours.

A heartbreaking study finds that screaming at dogs scares them for the long-term — and patience is a far superior method for training them. Researchers (Universidade do Porto) recruited 42 dogs from schools that used reward-based training, and 50 dogs from aversion training schools. During the study period, pups taught with yelling and leash-jerking were found to be more stressed, with higher levels of cortisol found in their saliva. Pups that experienced calm, gentle teachers, however, performed better at tasks researchers assigned to them.

A dog really is a man’s best friend — because dads end up having to care for the family pet. Despite being the most reluctant to get a dog, researchers found it is dads who are left to feed, clean and exercise the dog. The study of 2,500 pet owners revealed children are most instrumental in bringing a dog into the family.

When confronted about neglecting physical fitness, many Americans blame their busy schedules, demanding jobs, and family responsibilities as reasons why they can’t seem to make it to the gym on a regular basis. Well, according to a study (by RAND Corporation), the average American actually has about five hours of free time each and every day. So what’s really taking up all that time? You probably know already: televisions, smartphones, and other electronic devices.

A study found men look at women’s bodies more than their faces. They also found that women do it too — as in women check out other women’s bodies.

Fifteen percent of adults say they hide money in the freezer.

A Frenchman was arrested for shooting a priest who was having an affair with his wife. (https://bbc.in/36dq7Mc)

The restrictions on movement in the Czech Republic after 9:00 p.m. have caused some people to be a little creative. One exception that allows people out of the house at night is walking a dog, but not everybody has one. That didn’t stop a man in South Bohemia. He was caught by local police “walking” a toy stuffed dog in the city center. A Czech News crew was following the police to document them dealing with curfew violations and captured the incident. Images has since gone viral over social media. “I'm walking a dog here, I'm not doing anything illegal here,” the man said when caught by police, who demanded his identification card. He then tried to claim it was an artistic practical joke. The police officers, though didn’t see the humor in the violation of the emergency rules. They reminded the man of the valid regulations concerning a nationwide curfew, but in the end let him off with a warning. (https://bit.ly/2HYefFL)

Angered that a burger joint “had no more lettuce for their sandwiches,” a Florida Man allegedly caused a disturbance late last Wednesday that resulted in his arrest on a pair of criminal charges. Police say that 49-year-old Henry Arce-Cabellero was beating on the windows of a Checkers restaurant in Largo, a city in the Tampa Bay area. He was melting down “because he was upset that the store had no more lettuce for their sandwiches.” According to a criminal complaint, Arce-Cabellero was “yelling and screaming” at Checkers’ employees, causing them to “fear for their safety.” When police arrived at the eatery around 11:30 p.m., he was in his car and refused to identify himself, prompting an officer to remove him from the vehicle. He was charged with disorderly conduct in an establishment and resisting an officer without violence, both misdemeanors.(https://bit.ly/32mVq62)

A Broward County man brought a tiger into a grocery store and later told police it was his therapy animal ….. FAKE NEWS