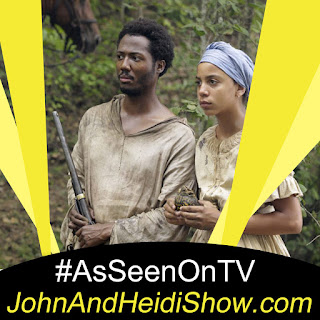 Today we visit with Hubert Point-Du Jour has performed in over 20 plays commissioned by the likes of The Old Globe (The Two Gentleman of Verona), The Public (Tiny Beautiful Things) and Shakespeare in the Park (Kenny Leon’s Much Ado About Nothing) as well as been honored in two Obie Award winning productions (A Beautiful Day in November on the Banks of the Greatest of the Great Lakes; A Map of Virtue), all while simultaneously balancing a growing television career. After a string of appearances on Happyish, Madame Secretary, The Path, Blindspot and Elementary, he is making his series lead debut alongside Ethan Hawke in Showtime’s limited event series, The Good Lord Bird. An adaptation of James McBride’s novel by the same name, the series follows Hawke’s abolitionist ‘John Brown’ as he leads Point-Du Jour’s ‘Bob,’ Joshua Caleb Johnson’s ‘Onion’ and a small army of anti-slavery insurgents on a journey to raid the federal armory in Harpers Ferry in effort to ignite a slave revolt. Often serving as ‘Brown’s’ conduit to what’s actually going on with slaves, ‘Bob’ become integral to ‘Brown’ in his endeavors. https://amzn.to/38C3Av7

Two in five Americans have falsely convinced themselves they have a serious disease after turning to “Dr. Google.” Instead of alleviating concerns, 74 percent of those who have self-diagnosed online say searching for their symptoms made them worry more about their health.

In a study, the vast majority of cyclists who die on U.S. roads are adult men. Most who die are riding without a helmet, and more than a quarter are legally drunk.

A police officer in Italy stopped a vehicle for speeding at 1:50 AM but by the time he got up to the vehicle to talk to the driver, the driver’s seat was empty. The only occupant of the car was sitting in the back seat, and he insisted he had not been driving. Since no one had left the vehicle, officers arrested the guy.

The wife of “Dancing With The Stars” pro Gleb Savchenko claims he had affairs with multiple women on the show. Savchenko’s wife, Elena Samodavona, reportedly caught him hooking up with his dance partner, Chrishell Stause. (https://bit.ly/2IibY7S)

Kendall Jenner is being criticized on Twitter for having one hundred people to a rooftop in Los Angeles to celebrate her 25th Birthday. (https://fxn.ws/2Jv31sF)

No doubt you’ll get more than a few YouTube views if you carve your Thanksgiving bird with a chainsaw — but you’ll also ruin the bird. But you can have some carving fun without ruining Thanksgiving with the Mighty Carver, an electric carving knife that looks like a chainsaw. It’ll slice through your turkey, bread, even tomatoes. AWESOME - https://amzn.to/35eFBQI

A study (AAA Foundation for Traffic Safety) reveals 41 percent of drivers admit to having fallen asleep at the wheel, and drowsy driving accounts for about 17 percent of all crashes, and 2 percent of vehicular fatalities. One tip to avoid drowsy driving: Drinking a good quantity of water helps as it prevents dehydration that can cause drowsiness. It also requires you to pull over regularly and stretch your legs for a bathroom break.

Your kids have too many toys. You know it, your spouse knows it, your friends know it. Only your kids think they need more. It’s time to thin the pile of toys, and Lifehacker has a good idea:

Step 1: Box up all their toys while they’re asleep.

Step 2: Return the toys they specifically ask for by name.

Step 3: After one month, donate the rest to charity.

Sweden has limited to eight per table the number of people sitting together in cafes and restaurants, amid a sharp rise in Coronavirus infections.https://bbc.in/365c9vv

Two American Airlines passengers were booted from a flight after one allegedly tried sneaking into first class — where she tried to hide under the other’s seat for the duration of the trip. The story, which was originally shared on FlyerTalk by a fellow passenger, concerns an American Airlines flight scheduled to depart from Dallas to Miami on October 30th. The flight was already delayed due to an incident with a catering truck when a woman from coach came into the first-class section to speak with a friend. The witness alleges that the woman from coach then attempted to crouch down and hide in the footwell of her friend’s seat, directly underneath the television display. “Apparently the plan was for this woman's friend to remain there the entire flight as it's something they thought would drive viewers to their ‘YouTube Channel,’” the passenger wrote. Law enforcement met the aircraft at the gate, the two passengers exited the aircraft, and the flight departed shortly after. (https://fxn.ws/38gregK)

An Altoona, Pennsylvania woman is facing charges after she failed to return a U-Haul for more than forty days. Police report that 37-year-old Donna Colabove was arrested and charged on November 3rd after the owner of a U-Haul called to file a report for a stolen van. Colabove had rented the van on September 21st, 2020, and paid a $90 deposit. She reportedly failed to return the van on September 23rd and allegedly changed her phone number and moved. U-Haul was unable to contact her at this point. They called police on the 41st day to file a report. The van was found when they contacted a family member on the 300 block of 1st avenue and saw the van pull in behind the house and park. Colabove was taken into custody. The victim assessed the mileage and damage. The amount owed totaled $4,000 while the damage to the roof of the van would be assessed at a later date. Colabove is facing charges of theft of a motor vehicle and theft of services. (https://bit.ly/2U0jVBa)

When a Florida man was released from jail he and a friend celebrated by breaking into another home. FLORIDA