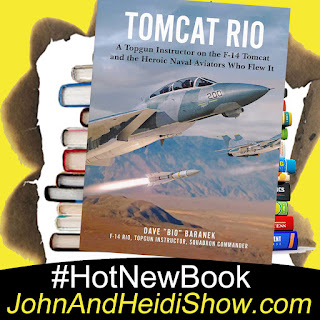 On Veterans Day we visit with Dave "Bio" Baranek, the best selling author of Topgun Days and Before Topgun Days. In his new release, Tomcat RIO, he plants readers firmly in the cockpit of the legendary F-14 Tomcat fighter, blazing along at twice the speed of sound seven miles above the ocean and the carrier that hurled it off its deck. He knows exactly what it means to "ride into the danger zone." Baranek worked with the filmmakers to create the movie Top Gun. NEW BOOK AVAILABLE NOW - https://amzn.to/2IvWCNu

First called Armistice Day, the holiday was established to honor Americans who had served in World War I. It always falls on November 11, the day when that war ended in 1918.

Many people confuse Veterans Day with Memorial Day. Memorial Day is a day for remembering and honoring military personnel who died in the service of their country. Veterans Day is largely intended to thank living veterans for their service, to acknowledge that all who have served have sacrificed and done their duty.

A study found the most stressful job in America is enlisted U.S. military personnel.

When he was prevented from bringing his liquor on a high-speed train, a man in China wasn’t about to waste the already-open bottle. So he sat down near the the security desk and drank all that was left in the bottle. One person who witnessed the situation shared a video on social media. Based on the label, the witness thinks the man chugged a $185 bottle of booze.

“Baby Shark” has become the most watched Youtube video of all time with over seven billion plays, putting it ahead of “Despacito.” (http://dailym.ai/2GmBqZx)

Johnny Depp lost his London libel suit against a British Newspaper that called him a “Wife Beater.” (https://cnn.it/2TZRtQh)

Prince William revealed that he battled COVID-19 back in April and struggled to breathe. Many Royals have dealt with COVID including Prince Charles.(https://bit.ly/3eqGCbh)

Justin Bieber was spotted on a music video set wearing only his underwear in downtown Los Angeles. (https://pge.sx/385SD4Y)

Recent reports state that rap queen Nicki Minaj has welcomed her first child into the world. Minaj is married to a guy named Kenneth Petty, who is reportedly a “music industry professional.” If you google him, you’ll find that he’s also a registered sex offender. (https://on.mtv.com/2TTnsS5)

Personal Trainer Sabrina Parr stated that she and former Los Angeles Lakers star Lamar Odom have called off their engagement. Lamar used to be married to Khloé Kardashian. (https://pge.sx/3paK3bc)

New projections show online holiday sales in the U.S. will jump 34 percent year over year for the 2020 season, nearly tripling the 12 percent growth registered in 2019.

Despite a pandemic and ongoing economic uncertainty, pet owners are increasing the amount of money they spend on their animals. “Pet pampering” and an increase in adoptions has helped increase pet product sales by almost 10 percent in 2020 compared to 2019.

Its time now to get a head-start on thinking about your Christmas gift shopping — and whether to fork out for fancy wrapping in-store. A study found the effort might not be worth it, as friends tend to like badly-wrapped presents more than those packaged to perfection. Beautifully wrapped presents, researchers claim, create high expectations that the gift inside can struggle to live up to.

Samsung tests phone durability with a butt-shaped robot. People stash their phones in their back pockets all the time, which is why Samsung created a robot that is shaped like a butt—and yes, even wears jeans—to “sit” on their phones to make sure they can take the pressure.

A Japanese company has unveiled a foot operated vending machine for people who don’t want to touch a germy keypad with their fingers. (https://bit.ly/3mRB4d3)

A woman who stole hair dye from a CVS drug store in Delaware and pulled a weapon on the manager is still at large. The manager at the store on Telegraph Road saw the woman put several boxes of hair dye in her handbag, and when the manager confronted her, she pointed a box cutter at the manager and took off. Police describe the suspect as white, 25 to 30 years old, about 5'5", wearing a camouflage hoodie. Anyone with information can call Corporal Andrew Johnson with the Delaware State Police Troop 6. Information may also be provided by calling Delaware Crime Stoppers. (https://bit.ly/35XJ05F)

According to officials, a man in Indiana was arrested over the weekend after allegedly assaulting two workers at a polling location. The Clinton County Sheriff's Office said on Facebook that deputies responded Saturday to a “disturbance” at a voting center in Mulberry, located about twelve miles outside Lafayette. 48-year-old Douglas Earl had entered the polling site wanting to vote, but did not have the required valid ID and was turned away by poll workers. Earl then began to walk around the inside of the building around where the voting machines were, and again was told to leave by poll workers. “After several attempts to get him to leave, the subject began striking two workers,” the sheriff's office said Monday. Earl was arrested for battery resulting in bodily injury and disorderly conduct. (https://fxn.ws/3oRT3Ss)

A Florida Home Health Aide is accused of swiping a credit card from a cancer patient. (https://bit.ly/34OsZzl)