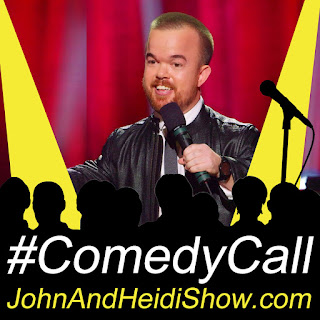 This week we have a special guest for a #ComedyCall. Brad Williams will visit with us about his upcoming interactive virtual comedy show on the RushTix platform. . ..Streaming live THIS SATURDAY, November 14th at 7pm. Brad’s show will bring audiences his famous high energy comedy, featuring humorous observations on disability, relationships, sex, and race. DIGITAL TICKETS AVAILABLE NOW - https://rushtix.com/events/brad-williams/

Through the RushTix platform, audiences can get closer to the stage than they’ve ever been before while also chatting with new friends and old throughout the performance. After the show, fans will also have an opportunity to hang out with Brad for a virtual cocktail after party featuring a special signature drink.

Brad Williams has become one of the funniest, most in-demand comedians working today. A California native, Brad started doing stand-up at age 19 and has been touring ever since. He has appeared on numerous TV shows including Legit, Dave Attell’s Comedy Underground, Sam and Cat, Live at Gotham, the Tonight Show, Jimmy Kimmel Live, Mind Of Mencia, and Pitboss.

His one hour comedy special “Fun Size” was the highest rated comedy special on Showtime in the year 2015. A year later, he followed it up with a 2nd special called “Daddy Issues,” its airing prompted the New York Times to write “no one is doing it more hilariously than Brad Williams.”

A new wave of the Coronavirus pandemic is forcing many countries in Europe to restart their lockdown orders, and Researchers in Italy have found more people are being diagnosed with sexually transmitted infections during lockdown than before. (https://bit.ly/2TOii9Z)

A concerning study conducted by a team of Researchers in Boston finds that one in five grocery store employees has tested positive for COVID-19. (https://bit.ly/3jZatIU)

Police in Poland stopped a guy on suspicion of speeding. The man, who appeared drunk, was arrested and taken to the police station. When cops printed out the results of his breathalyzer results, which showed a blood alcohol level well above the legal limit, he grabbed the paper printout and attempted to eat it.

The Hollywood Reporter has confirmed that a positive COVID-19 test has shut down production on Olivia Wilde's new film “Don't' Worry Darling.” New Line, the studio behind the feature, halted filming after a member of the production tested positive following the required and ongoing on-set testing.(https://bit.ly/3jWPwhL)

Warner Bros. has apologized for a character’s depiction in the HBO Max movie “The Witches” after backlash from people with disabilities. Activists targeted the film — directed by Oscar winner Robert Zemeckis — for playing up a “split hand” on the Grand High Witch character, played by Anne Hathaway. (https://bit.ly/3esB6Vu)

A French bulldog named Wilbur has been elected Mayor in the town of Rabbit Hash, Kentucky. (https://nbcnews.to/359Zokb)

A Playboy model traveling with her 7-year-old son said she was “humiliated and embarrassed” by a Southwest Airlines flight attendant who told her she couldn’t fly while wearing her low-cut leopard print top. Southwest Airlines has a dress code. (https://bit.ly/2GofAVo)

In light of the pandemic, grocery stores have increased their cleaning and disinfecting measures. But how well is that working? In Toronto, Canada, 24 grocery stores had high-touch surfaces swabbed. Unsurprisingly the surface with the most bacteria was the PIN pad used during checkout. The surface with the second-highest bacteria count was the shopping basket handle. Tied for third place were the freezer door handle and the front of the shopping cart. Fourth was the baby seat in the shopping cart. The cleanest spot was the shopping cart handle, probably because staff are regularly cleaning those and stores are providing wipes so customers can also clean them.

If you could only eat one food for the rest of your life, which would it be? A survey (Harris Poll) posed this thought-provoking question to Americans. In an increasingly polarized country, where ideological differences result in shouting matches and pointed fingers, it’s heartening to know that Americans can agree on what really matters: pizza. Yes, the single food that most Americans would want to eat for the rest of their lives is pizza, which 21 percent of survey participants chose as their answer. It beat out steak (16 percent), tacos (11 percent), pasta (11 percent), and even the hamburger (13 percent).

A man is facing a felony charge after allegedly threatening a truck driver with a firearm on Friday. The incident occurred at 8:15 a.m. on Friday, October 30th, in Glen Ellyn, Illinois. The Glen Ellyn Police Department reports that Christopher Davis allegedly pointed a gun at a truck driver. By the time officers responded to the scene, Davis had fled into an apartment building. The apartment building was evacuated and a nearby school was placed on lockdown. Police were able to take David into custody without further incident by 11:15 a.m. Officers say that they were able to recover the gun that was reportedly pointed at the truck driver. Davis was charged with a misdemeanor count of aggravated assault and a felony count of aggravated unlawful use of a weapon. (https://bit.ly/34P8bYy)

WNEM, the CBS affiliate licensed to Bay City, Saginaw, and Flint, Michigan, aired a helpful reminder about daylight saving time on October 31st, 2020 — but sharp-eyed viewers got more than they bargained for. The graphic was assumedly supposed to read “Turn your clocks back one hour tonight” but whoever created the image missed an “L” resulting in “Turn your cocks back one hour tonight.” Ouch. That sounds painful. In a Facebook post, the station wrote: “We regret the unfortunate typo in a spot for changing clocks this weekend. We’ve taken steps to address it” accompanied by a different graphic with, thankfully, the correct spelling of “clocks.” (https://bit.ly/32aMyAo)

A Bradenton Man was arrested for attacking a mechanic with a golf club because he was fixing his car too slowly ….. FLORIDA (https://bit.ly/3dZxCcV)