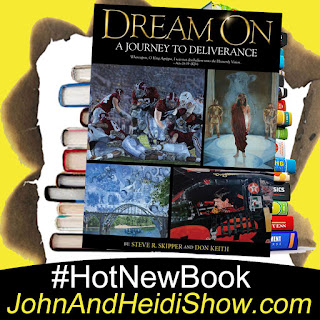 Today we talk with Steve Skipper. The new documentary “COLORS OF CHARACTER: An Artist’s Journey to Redemption” shares the extraordinary journey of prolific artist Steve Skipper. With no formal training, Skipper has broken down walls of racism in the world of fine art. God radically saved Skipper when he was a member of a notorious Birmingham, Alabama street gang and immediately his life was transformed. Focused on his new-found faith and his talent for painting, Skipper faithfully seized opportunities that only God could have provided and he quickly began gaining notoriety in the sports world for his meticulous artistic style of super-realism. SteveSkipperStudio.com

His book Dream On: A Journey to Deliverance - https://amzn.to/3kFHjPB

A Harvard study found that the health benefits of taking multivitamins may be all in the mind. (https://bit.ly/3nfjijT)

A new study found that restaurants, gyms, hotels, and churches account for 80% of the country’s Coronavirus cases. (https://bit.ly/36saMr1)

The Chicago White Sox say the team was aware that Tony LaRussa got a DUI in February BEFORE they hired him. LaRussa got pulled over by the cops at 2:00 in the morning. (https://bit.ly/38wOOpl)

A drunk woman took off her pants on a flight from Florida to Texas and threw a punch at a flight attendant before the plane was diverted to Alabama. The woman was taken off the plane in a t-shirt and a thong. (http://dailym.ai/32AK5zm)

The Los Angeles Fire Department responded to reports of smoke coming out of a furnace at Denzel Washington’s home, but luckily everyone was okay. (https://pge.sx/32DHNzs)

“Star Wars” fans are upset that Baby Yoda ate the eggs of an alien character that had just given birth during the latest episode of “The Mandalorian.” (https://bit.ly/36mePFm)

A video of a giant meteor shooting across the sky of New Jersey has gone viral. (https://bit.ly/3kkh9BN)

Pfizer CEO Albert Bourla sold $5.5 million dollars in stock on the day his company's COVID-19 vaccine was revealed. He says there was no insider trading and it was just lucky timing on his part. (https://bit.ly/2Ir7Bba)

The Stock Market skyrocketed after Pfizer announced its Coronavirus vaccine has been 90% effective and should be ready earlier than expected. Meanwhile, Zoom stock fell dramatically with the vaccine news. (https://bloom.bg/35f9Oik)

Cardi B has apologized for offending the Hindu culture in her new Reebok ad. Cardi was posing as a Hindu goddess. (https://bit.ly/35pStUf)

Phil Collins and his on again, off again wife, Orianne Chevy are separating again after the kids caught her with another man. (https://pge.sx/2U9NjVR)

Chipotle is opening its first “digital-only” restaurant where customers will order on an app ahead of time and pick up their food when they arrive. (https://cnb.cx/2UkM2eT)

This ought to liven up the family reunion. According to Ancestry.com, one in eight Americans has a felon in their family tree.

A desire to get all his wishes fulfilled with a “magical lamp” à la Aladdin has landed a doctor in trouble. Yes, we didn’t wake up today thinking we’d read such news either… A doctor who had just got back to India from London was cheated by two men who claimed to be “tantriks,” also known as sorcerers, and sold him “Aladdin Ka Chirag,” or Aladdin’s magical lamp, for over a quarter of a million dollars. They promised him that it would fulfill all his wishes without the much-needed hard work to translate them into reality, and that it would make him a billionaire. The police have arrested the two accused. (https://bit.ly/3kRU1LR)

A medical technology startup company’s CEO is accused of misusing more than $400,000 in company funds on escorts, strip clubs and personal expenses from gifts to Uber Eats, according to a lawsuit filed by one of the company’s minority stakeholders. Ecover Global, which runs an app to help doctors share messages with patients before and after surgery, was accepted into a mentoring program by startup nonprofit Tampa Bay Wave last year. 28-year-old CEO Raymond Sever was seeking investor funding earlier this year. During a pitch night hosted by Tampa Bay Wave in January, he told potential investors the company had already raised $700,000 and was valued at $35 million. Sever’s former best friend and business partner, Brandon Bowen filed a lawsuit late last month that says the CEO misappropriated hundreds of thousands of dollars from June 2019 to June 2020. Bowen’s lawsuit includes a series of expense reports and text messages he says shows Sever’s regular misuse of the startup’s funds such as: nearly $30,000 paid to nine different women, including one who got $12,000 total, and $17,000 in ATM withdrawals that was used to cover liquor and visits to Thee Dollhouse strip club. (https://bit.ly/3eL9I5d)