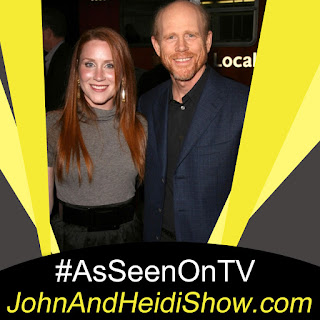 Today we visit with Paige Howard, she's featured in Nickelodeon’s new space adventure series "The Astronauts" from executive producers Ron Howard and Brian Grazer. In the series, the spacecraft Odyssey II is set to retrieve a foreign object that could potentially save mankind. The plan goes awry when five kids use their parents’ security clearances to sneak onto the empty ship and the onboard AI system triggers the launch sequence. In space, the kids must assume their new role as astronauts and brave harrowing tasks, as their parents rush to find a way to control the situation.

In the tradition of HAL from 2001: A Space Odyssey, Paige plays Matilda, the Odyssey II’s AI system who helps guide the kids through their dangerous mission. https://www.youtube.com/watch?v=h_rhGIjL6zw&feature=youtu.be

A study by the University of California found that face masks do NOT impede your breathing during workouts, although you may think they do. (https://bit.ly/38TLqoQ)

A new study found that regularly eating eggs can increase your chances of diabetes.(https://bit.ly/38TkGoz)

Authorities in New Hampshire said they seized an illegally kept alligator and an opossum from a woman's home. The New Hampshire Fish and Game Law Enforcement Division and Operation Game Thief said conservation officers served a search warrant at the Claremont home of a woman suspected of keeping prohibited wildlife. The officers seized an American alligator and an opossum from the home. The woman was charged with illegal possession of the animals, which were transferred to facilities designed to care for wildlife. (https://bit.ly/38P2Z9E)

Scooter Braun sold Taylor Swift's master recordings to the Disney Family's Investment fund for $300 million dollars. Taylor Swift wrote a lengthy post to her fans saying that Scooter didn't even allow her to bid on the catalog.(https://bit.ly/2UzW5wB)

A Russian supermodel has filed a $20 million lawsuit against Ralph Lauren for using her photos without permission. (https://bit.ly/2INA5vZ)

A good samaritan is being praised on the internet for using jujitsu to stop a baby snatcher from stealing a child out of a mother’s arms on the streets of New York. (https://fxn.ws/2KiwVAM)

A video of a Toronto sinkhole that was filled with a bright green slime that looks like the radioactive goo that spawned the Teenage Mutant Ninja Turtles has gone viral. (https://bit.ly/3lUYZZ1)

Archaeologists have unearthed the bodies of two men who were buried in the ancient Italian City of Pompeo in the year 79 A.D. (https://bit.ly/2IWuoeS)

The copy of the “Double Fantasy” album that John Lennon autographed for his killer, Mark David Chapman, has gone up for auction. It’s expected to fetch $1 million dollars. (https://pge.sx/3lYOuDK)

If you’re a frequent beer drinker, you’ll spend $49,909 on the stuff over your lifetime.

A Sri Lankan official ate raw fish during a press conference to show the public their markets haven’t been contaminated by the Coronavirus. (https://reut.rs/3kMf8OX)

A driver looking to make some quick cash caused quite the spectacle on Interstate 4 through Hillsborough County Monday. Florida Highway Patrol said a driver picked up a downed metal utility pole, strapped it to the roof of his 1997 Toyota Camry, and planned to sell it to a scrapyard. He didn't get too far. Just after 10:00 a.m., FHP got a call from someone who witnessed another driver loading the pole onto his roof on the outside shoulder of I-4 west. The witness followed at a safe distance until a Trooper made a traffic stop. The driver, 71-year-old Douglas Hatley of Lakeland, said he was trying to turn in the pole as scrap metal for cash and that he didn't know it was illegal to remove the pole, even if it was broken or had fallen. Hatley was arrested and taken to the Hillsborough County Jail. He's charged with grand theft. (https://bit.ly/3kHO6IC)

A wanna-be rapper from Brooklyn wasn’t going to lose his shot at blasting a flamethrower from atop a city bus for a guerrilla music video — even though the illicit nighttime stunt put more than two dozen passengers in harm’s way. Streams of fire burst into the air and down the back of the MTA bus in shocking video that emerged on social media. The 57-second clip shows rapper Dupree G.O.D jumping shirtless from the top of an ice cream truck onto a B26 bus at Franklin and Putnam Avenues in Bedford-Stuyvesant. He then fires off his hand-held flamethrower, shooting blazing arcs in the air before running to the back of the bus and shooting the flames downward, torching the ground as the bus starts to move. An NYPD spokeswoman said the department was “aware of the video” and is currently conducting an investigation. (https://bit.ly/35HT8jP)

A St. Petersburg man was arrested after police found a bag of methamphetamines stashed inside his belly button ….. FLORIDA (https://bit.ly/3pwulXQ)

Best Buy Employees Go Above And Beyond For Boy With Autism
https://www.sunnyskyz.com/good-news/4033/Best-Buy-Employees-Go-Above-And-Beyond-For-Boy-With-Autism