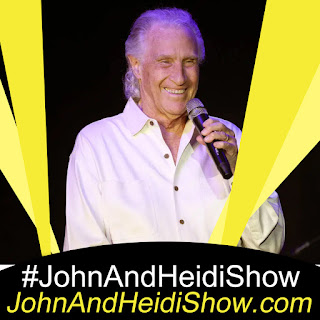 Today we visit with Rock and Roll Hall of Famer, Bill Medley. He really is a living legend. Bill Medley is truly one of the most iconic figures in American music history. His instantly recognizable baritone voice has anchored some of the biggest recordings of all time. He’s won a Grammy, an Oscar, a Golden Globe, and an American Music Award. https://www.stnj.org/event/righteous-brothers

Researchers are attempting to understand why sick people show up for work in the office.

A Utah man was arrested after police say he drove on the wrong side of the freeway at speeds over 100 miles per hour while intoxicated. The man, later identified as 43-year-old Cory Roy White, was reported driving northbound in the southbound lanes of Interstate 15 late Friday night or early Saturday morning. When a Utah Highway Patrol trooper, a Nephi Police officer, and Juab County Sheriff's deputies responded, they said he was clocked at 110-mph at one point during the pursuit. The UHP trooper eventually was able to perform a pit maneuver and stop the driver's van. According to the arrest report, White told the officer that he thought he was dreaming, and “he thought the Trooper was just trying to race him.” The officer said he could smell alcohol on the driver and saw an open container in the cup holder. (https://bit.ly/33cDFXv)

Actor Ben Stiller is a self-proclaimed Trekkie with a collection of Star Trek memorabilia that would rival a museum collection.

Director Quentin Tarantino collects board games. A large part of his memorabilia collection is movie-related board games. Tarantino cited practicality as his reason for choosing to collect board games, stating that lunch boxes were too expensive when he began collecting.

Companies attempting to limit the online-shopping productivity drain may need to start in the corner office. According to a survey (by CareerBuilder) senior-level employees are more likely to use work hours to shop online than entry-level or professional staff members by a 7 percentage point margin — 53 percent to 46 percent respectively.

You should stop texting ‘OK’ to people. Or ‘yes’. Apparently these words, without an exclamation point or an accompanying emoji, can come off as passive aggressive, dismissive, or angry. This comes from New York Times advice columnist Caity Weaver. In person an ‘OK’ comes with a facial expression, a positive delivery, maybe even a thumbs-up. By text, ‘OK’ or just ‘yes’ are cold and could be seen as rude.

When shopping for gifts for young children, keep this family’s story in mind and remember: young children will try to eat anything they can fit in their mouths. Six-year-old Cameron Moreau asked for Sky Magnet balls for his birthday this year. Soon after receiving his present, the New Jersey boy got sick and ended up in the emergency room. Doctors couldn’t figure out what was wrong until they saw his x-ray — and found his birthday present in his body. How did the toy magnets end up inside little Cameron? He says: “I was made at my brother, so I swallowed them.” Cameron and his big brother Casius had been fighting over the toy, so Cameron put them in a place his brother (or anyone, really) wouldn’t be able to get them.

There are benefits to taking work breaks. Your body and mind benefit from these breaks, which keep you energized so that you may tackle the rest of your day. But what’s the the perfect work/rest ratio? And app called DeskTime played Big Brother, monitoring employees’ computer use. They found the most productive 10 percent worked hard for 52 minutes, then took a break for 17. It’s backed by scientists, pointing to the natural rhythms of our attention span. Our brain can focus for up to 90 minutes, then needs roughly 20 minutes of rest.

A third of Black Friday shoppers hide some purchases from their partner.

A Taiwanese cat burglar gassed himself into police custody. When police entered a home he was burglarizing the thief turned on a propane valve in an attempt to resist arrest. The red and teary-eyed burglar surrendered after a short standoff.

Parents who name their babies Rowdy or Rebel are only asking for trouble, but what’s wrong with naming them Jack or Mia? Those are the two naughtiest names, according to two British companies which surveyed 1,500 teachers, parents, and children to find out which names are most often attached to the naughtiest kids. Along with Jack at the head of the naughty list, boy names seen as the naughtiest were Harry, Oliver, Charlie, and George. Along with Mia as the naughtiest girl, other naughty girl names include Ella, Isabella, Sophia, and Amelia. Arthur and Isla top the Nice List. Other well-behaved girl names are Ava, Grace, Olivia, and Emily, while the nicest boys are Noah, Oscar, Muhammed, and Leo.

In England a team of crooks attempted to break into an ATM. It was their choice of tools that caused them trouble. Instead of using a hacksaw, or perhaps a sledgehammer, these guys used a blow torch to cut into the machine. It did the job, but it also caught the money on fire. They left empty-handed.