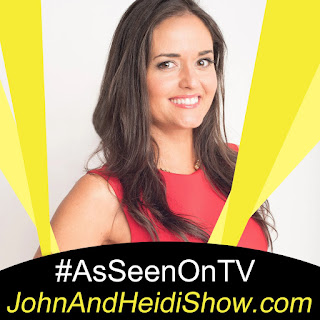 This weekend we visit with Danica McKellar (The Wonder Years, The West Wing, DWTS & more) about her latest HALLMARK CHRISTMAS MOVIE “Christmas She Wrote” which premiers this Sunday, December 6, 8 pm ET/PT on Hallmark Channel.

When Kayleigh’s (Danica McKellar) New York advice column, “Your Best Self,” is the casualty of belt-tightening by the paper right before Christmas, she heads home for the holidays to reconnect with her family and consider what’s next. Kayleigh’s quiet Christmas at home gets turned on end when Tripp (Dylan Neal), the new editor in chief responsible for the decision, suddenly shows up to woo her back and make her loyal readers happy.
https://www.hallmarkchannel.com/christmas-she-wrote

A German study found that rapeseed may be a healthier form of plant based protein than soy. Rapeseed is a member of the cabbage family. (https://bit.ly/39lj0Ey)

A new study found that COVID-Killing UV Lamps can cause eye damage. (https://bit.ly/2Vhy3Ha)

Steuben County Sheriff’s deputies arranged a deal with a Quincy, Michigan man to trade a car for a pound and a half of marijuana. The deal went down Monday morning at a truck stop west of Angola. 39-year-old Andrew Wade Galinis was arrested and initially charged with Level 6 felony dealing in marijuana. Formal charges will be filed by the Steuben County Prosecutor’s Office. The sheriff’s department learned Sunday about a query on a vehicle listed for sale online in Steuben County. The promised payment was a pound and a half of marijuana. According to the web site priceofweed.com, which collects data from members of the public throughout the nation, the average price of high-quality marijuana in Indiana is $330 an ounce. That would have made the transaction worth $7,920. (https://bit.ly/33gnnwC)

The Academy of Motion Pictures announced that The Oscars will have an in-person ceremony this year. (https://bit.ly/39CiIJl)

Moderna asked the FDA for Emergency Use Authorization of its Coronavirus vaccine Monday, clearing the way for it to be available by the end of the year. (https://cnb.cx/3lidNzC)

A California bride said “I do” from her parents balcony after testing positive for the Coronavirus just days before her wedding. (https://bit.ly/3mCUJO0)

A 27-year-old Tennessee woman gave birth to a little girl using an embryo that was frozen in 1991, setting a world record for the longest frozen embryo to result in a live birth. The baby is technically 25-years-old. (https://bit.ly/3g7Dhib)

A 62-year-old man was found desperately clinging to the hull of his capsized boat off the coast of Florida. (https://abcn.ws/39rDP0X)

Research shows it takes less than four hours before we need a break from our extended family during the holidays. The survey of adults who traveled to visit family for the holidays found we can spend an average of three hours and 54 minutes with family before needing a moment to ourselves.

You could sharpen your own pencils, but who would want to go to all the effort? Instead, hire David Rees of Artisanal Pencil Sharpening in New York’s Hudson Valley. He’ll sell you a pencil and whittle it to perfection before returning it to you with the shavings and a certificate of authenticity. Seriously. And it’s $100. http://www.artisanalpencilsharpening.com/

The City of Seattle is cutting its police budget by 18% just as homicides have soared to their highest rate in over a decade. (https://fxn.ws/2VmvLGu)

A study finds that men with facial hair are more sexist.

Britain’s winter Coronavirus restrictions will forbid people from mixing with relatives who live in other houses until Easter. (https://bit.ly/33d1u1r)

A policeman in Malaysia was arrested for allegedly taking two sacks of onions from a delivery attendant who purportedly breached the Conditonal Movement Control Order (CMCO). The incident took place in Senawang at noon on November 29th, where the suspect was arrested. The Truck Driver claimed that his truck was stopped at a roadblock after exiting the Senawang toll plaza at about 2:00 pm. A policeman then asked the truck driver and attendant to show a letter from their employer allowing them to transport the goods, and if the failed to do so they woul have to pay a fine. He specifically said that, in the even they were unable to do so, they would have to hand over the onions. An Assistant Commissioner said that the case is being investigated under Section 384 of the Penal Code for extortion. Upon conviction, offenders can be jailed up to ten years, fined, whipped, or any combination of the two. (https://bit.ly/37tuN0T)

Authorities say that Firefighters in Massachusetts pulled a man to safety after he got stuck chest-deep in the thick mud of a drained pond Sunday morning. The rescue happened in Springfield at Watershops Pond. It was unclear how the man became trapped in the mud. Images from the scene show Springfield Fire and Emergency Services crewmembers place ladders on the ground to help their footing in the slippery mud and use ropes to send a sled to the trapped man. Local officials have urged residents to avoid the area due to its current condition. Commissioner B.J. Calvi told WWLP-TV on Monday that it took over four hours to rescue the man. No firefighters were injured during the rescue.(https://fxn.ws/3qpn10W)

A Fort Myers man was charged with indecent exposure after getting naked during a picture with a mall Santa ….. FAKE NEWS

A 1st Grade Teacher Arrived Early Every Day To Teach English To A Student. 40 Years Later, The Student Finds Her To Thank Her
https://www.sunnyskyz.com/good-news/4055/A-1st-Grade-Teacher-Arrived-Early-Every-Day-To-Teach-English-To-A-Student-40-Years-Later-The-Student-Finds-Her-To-Thank-Her