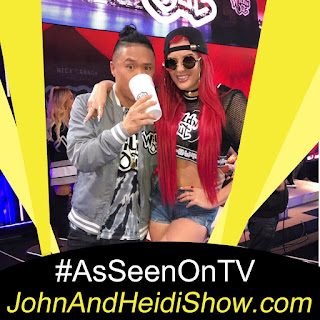 Tim Chantarangsu formerly known as Timothy DeLaGhetto (and previously Traphik), is an American rapper, comedian, actor, and internet personality. He is best known as a founding cast member on the revived version of the improv comedy show Wild 'N Out (2013–2018, 2020). Chantarangsu is also known as the co-host of the food-based web shows Basic to Bougie on MTV, and Send Foodz on Thrillist. He has a brand new series on MTV, Deliciousness will kick off with a one week holiday-themed special event from December 14th to December 18th at 7PM ET/PT.

National Day Of The Horse

A new survey found that sales of alcohol hip flasks have gone up 505% this year. (https://bit.ly/3qnBb2p)

A survey by One Poll found that gift cards are the number one holiday gift idea this year. (https://bit.ly/39D57BA)

Police say that a Florida woman was arrested for allegedly setting up a dating profile advertising “free meth tonight” that sent suitors to her romantic rival’s home looking for sex. According to an arrest report, 29-year-old Vanessa Marie Huckaba created the “Islandbabe1234” profile on the website Seeking Arrangement and included the name, photo, cellphone number and address of a woman who was dating her ex-boyfriend. “Multiple strangers began arriving at the victim’s residence thereafter,” said Adam Linhardt, a spokesman for the Monroe County Sheriff’s Office. Other creeps sent the woman naked photos of themselves. The 36-year-old victim said that Huckaba, who she had never met, started harassing her in October after she began dating a man Huckaba had previously been in a relationship with for six months. Huckaba was arrested Saturday and charged with cyberstalking and harassing, both misdemeanors.(https://fxn.ws/3mlqVFA)

Steven Spielberg has gotten a restraining order against a female stalker who threatened to murder him on Twitter. The Judge has ordered her to stay one hundred yards away. (https://bit.ly/36CQ2yk)

Gwen Stefani showed off her $500,000 engagement ring from Blake Shelton, as she promoted her new single on the Hallmark Channel. http://dailym.ai/3g6B46v

This weekend is the 95th anniversary of the first motel opening in the U.S. The term motel came to have meaning only when the automobile started to dominate the landscape and the term “motor hotel” came into general use. The first motel opened 95 years ago in San Luis Obispo, California. Named the Motel Inn, it had accommodations for 160 guests in individual chalets, each with bathroom, telephone and a garage — powerful selling points in 1925.

Bronx Born Rapper “A Boogie Wit Da Hoodie” has been arrested in New Jersey on weapons and marijuana charges. (https://bit.ly/33XS1eS)

Queen Elizabeth and Prince Phillip may be among the first to get the UK’s COVID-19 vaccine to calm suspicions. (https://bit.ly/33OBqdc)

Former British Model Tracy Dixon has won a lawsuit against a Peeping Tom Police Officer who used a helicopter to film her naked. He owes her $200,000 (https://bit.ly/3qstxnB)

The Association for Pet Obesity says there’s an epidemic of overweight pets in America.

Eight Inmates were killed and thirty-five were injured during a Sri Lanken prison riot. (https://bit.ly/33xrrsJ)

After a brief chase, deputies apprehended a man accused of not wearing pants at the Next Door Food Store in Tallmadge Township, Michigan. Ottawa County Sheriff deputies were dispatched at 5:00 p.m. Monday, December 7th to the store on a call for indecent exposure. The caller provided a suspect and vehicle description to dispatchers. Upon arrival, deputies located the suspect vehicle leaving the parking lot and conducted a traffic stop on the car. The investigating deputy made contact with the suspect, and according to the release, when the deputy returned to his police car to continue the investigation, the suspect fled. A vehicle pursuit began and the suspect fled north through the unincorporated community of Marne, eventually coming to a stop. The suspect was then taken into custody and lodged at the Ottawa County Jail without further incident. The suspect’s name is being withheld pending arraignment. (https://bit.ly/3qGIGl2)

This suspect is in some deep doo-doo. Sussex police in the UK said on Facebook that a passenger of a stolen car tried to make a clean getaway – but he ended up “neck-deep” in a pit of manure. “Thanks to determined officers a rescue ensued, and they all ended up safe, but covered in cow poo,” the department added, along with a poop emoji. Making matters worse for the hapless man, his feculent pants were pulled down a little during his escapade, partially revealing his underwear as he stood cuffed in front of an officer. Facebook users continued to dump on the man after his embarrassing predicament. “Didn’t come up smelling of Roses then,” one wrote. “Well dung,” another said to the cops who took no crap. (https://bit.ly/3qoX8hB)

A St. Petersburg was busted for soliciting a prostitute after he offered to pay an undercover cop with a hamburger for sex ….. FLORIDA (https://bit.ly/3o6Or9N)