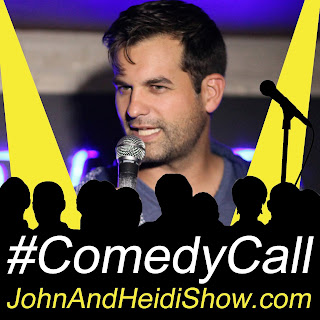 Today we visit with Daily Show Correspondent Michael Kosta About His First One-Hour Original Comedy Central Special “Michael Kosta: Detroit. NY. LA.,” which was filmed in each of those three cities in a hilarious and nostalgic reminder of pre-pandemic life. Michael has also appeared on The Tonight Show, Conan, Late Night with Seth Myers and was even a pro tennis player before focusing his career on comedy. Here’s the trailer. https://www.youtube.com/watch?v=dch7AJCL9tQ

Ameriprise Financial released a survey a couple of years ago that found the average spending limit that necessitated a conversation was $400.

A California man was arrested Sunday for Boating Under the Influence (BUI) near the Narrows in Collier County, Florida. 57-year-old Michael Doran of Los Angeles was pulled over for a slow speed zone violation by the Florida Fish and Wildlife Conservation Commission (FWC) around 1:30 p.m. Officers said Doran smelled like alcohol and they saw multiple open alcoholic beverage containers near him. They say Doran was wobbling and slurring his speech. After conducting field sobriety tests officers determined Doran was drunk and charged him with BUI. He was placed in handcuffs and his boat was towed back to Hamilton Harbor and impounded. Doran was picked up from the boat and on his way to Naples Yacht Club when officers said he ‘urinated and defecated on himself’ in the vehicle. He was allowed to use the restroom again at the yacht club. Officers then took Doran to the Naples Jail Center. (https://bit.ly/33w91Zc)

Huge Hollywood Live Auction Event, December 12. Movie Prop Memorabilia Auction. PREMIERE PROPS WILL BE CELEBRATING FRANK SINATRA’S BIRTHDAY ON SATURDAY, DECEMBER 12 WITH EXCLUSIVE PHOTOS OF HIS WEDDING TO AVA GARDNER GOING UP FOR AUCTION. A COLLECTION FROM DEBBIE REYNOLDS ARCHIVES AND HER SON TODD FISHER TO ALSO BE AUCTIONED OFF. IN TOTAL OVER 750 PROPS AND COSTUMES TO BE AUCTIONED OFF INCLUDING ITEMS FROM ELVIS PRESLEY, MICHAEL JACKSON,JAMES BOND BLACK PANTHER AND THE GODFATHER FRANCHISES AMONG OTHERS.
https://www.icollector.com/Hollywood-Extravaganza-Famous-Movie-Props-Costumes-Auction_as68162

Despite the ongoing pandemic, a new study finds a quarter of adults don’t wash their hands after coughing and 16 percent will even sneeze while covering their mouths without sanitizing afterwards. Incredibly, a third of adults admitted the increase in COVID-19 cases had no bearing on how important they thought it was to wash more regularly. In fact, while the average person spent 19 seconds soaping their hands in July following the first wave, this has now dropped to just 16 seconds. The study found that the more diligent adults are washing and sanitizing their hands eight times a day — the same as at the beginning of the pandemic.

An app that aims to translate your cat’s meow has been developed by a former Amazon Alexa engineer. MeowTalk records the sound and then attempts to identify the meaning. The cat’s owner also helps to label the translation, creating a database for the AI software to learn from. Currently, there are only 13 phrases in the app’s vocabulary including “feed me!”, “I’m angry”, and “leave me alone”. Research suggests that, unlike their human servants, cats do not share a language. Each cat’s meow is unique and tailored to its owner, with some more vocal than others. So, instead of a generic database for cat sounds, the app’s translation differs with each individual profile. The app is available free on both Google Play Store and Apple’s App Store.

A survey once found that America’s dullest store for holiday shopping is the museum store at the National Museum of Funeral History in Houston, Texas. The Funeral History Museum’s in-house gift shop and online store sell such tempting items as a $75 book on The History of American Funeral Directing, and a $25 book titled President Gerald R. Ford Funeral Service. Browsers can also buy a baseball cap, mug or a tombstone-shaped magnet emblazoned with the museum’s slogan: “Any day above ground is a good one”.

A study says part of avoiding heart disease might involve brushing your teeth. Researchers in Korea found a clear link between good oral health and a lower chance of heart irregularities and serious heart failure. The study looked at the health records of more than 150,000 middle aged to elderly Korean residents. During the study period 3 percent of volunteers experienced a case of an irregular heart beat, while 4.9 percent experienced heart failure at least once. But even after accounting for other known factors for heart disease like age, body mass index, and smoking history, the researchers found that people who had reported better oral hygiene were less likely to develop these heart problems. Those who brushed their teeth at least three times a day, for instance, were 12 percent less likely to have heart failure, and people who had lost a substantial majority of their teeth (22 teeth or more) were 35 percent more likely to have heart failure, after accounting for other factors.

Paresthesia: that “pins and needles” feeling.

A couple in Russia who tried to avoid buying a train ticket for their daughter by putting her in a suitcase were caught when the case was stolen. Luckily, the girl was found after the crooks let her out but kept the suitcase.

An Australian woman who won a lottery jackpot of nearly $150,000 said she was unaware of her win for 10 days because she thought the emails from lottery officials were “scams.” It wasn’t until she received a letter in the mail that she decided to check her online lottery account. The woman discovered she had won a jackpot of $146,879. She says most will go toward her and her husband’s retirement.

When visiting family for the holidays, what are the rules and boundaries? A woman in Australia who follows a vegan lifestyle had her mother over to stay with her. Things were going well, until she discovered that her mom had been frying bacon in the kitchen one morning. The woman said she was left feeling “riled up” by her mom’s actions. Vegans don’t eat any animal-based products, including items such as meat and cheese. After the woman posted her ordeal on Facebook many people agreed her mom was being disrespectful. One commenter said: “It’s your house. Ask your mother to stop doing that as it goes against your values.”

A Bradenton Dog Walker was busted for pubic intoxication after she took a bath in a shopping mall fountain with her dogs ….. FAKE NEWS