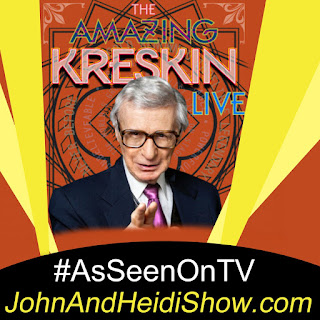 It's brand new year... and we have the opportunity to take a little peak ahead with The AMAZING Kreskin! He's a mentalist who has preformed for millions. He has numerous books out with a NEW fun book available now! The Adventures of the Amazing Kreskin - https://micropublishingmedia.com/books/shop/the-adventures-of-the-amazing-kreskin/

A California man is accused of biting a police K-9 and barking at officers after leading them on a pursuit Saturday night. Police said the man had been drinking, and that methamphetamine was found in his van. (https://bit.ly/3rvovHs)

2020 did have some bright spots. Early in the year Netflix announce a way to disable the auto-play trailers. I’m talking about the feature that starts playing trailers for whichever title you stop on while scrolling through the grid. To turn off auto-play trailers you’ll need to log in to your Netflix account on a web browser — meaning you can’t turn off the feature through the Netflix app on your tablet, Roku or your TV. To turn off auto-play trailers you’ll go to your Account page and open the Profile & Parental Controls. Editor: Post a link on your show blog or on your most-used social media account. Here’s the link.
https://help.netflix.com/en/node/2102

The most surprising thing about this list of worst movies of the year is that they all came out in 2020. With the pandemic still raging, our internal calendars is off and so we forgot that some of these stinkers came out this year. The worst films of 2020, compiled from lists from various entertainment websites and in no particular order.

• Tyler Perry’s A Fall From Grace

• The War With Grandpa

Want to eat healthier in 2021? That’s not a great New Year’s resolution. Doctors were asked to share what they felt were the worst health-related resolutions and “eat healthier” came out on top. The problem is that people often do not know exactly what this means, and the resolution is not specific enough. It would be more helpful for an individual to first define what eating healthy is and what it means to them. Next, they should be specific about what changes they plan to make in their diet to ensure they are eating healthier. • FULL LIST OF 10 https://www.eatthis.com/worst-new-years-resolutions-2021/

If you’re one of the 40 percent of people who will make a New Year’s resolution, don’t feel bad if you stumble. Experts say that by January 14 over a third of resolution-makers will have quit. The No. 1 resolution each year is to “lose weight” followed by “exercise more.” Can you guess No. 3? “Be a better person.”

Already planning to drop those pounds you put on in quarantine next year? Perhaps your New Year’s resolution is to get back out and travel more. Whatever the plan is, a researcher says you’re better off throwing your 2021 goals out now because few ever get accomplished. To change things up, and make yourself happier, the expert on motivation and well-being claims resolutions to help others will be better for you personally in the long run. Richard Ryan, professor emeritus of psychology at the University of Rochester, says, “We found that when people are focused on giving to others they experience deeper satisfactions than when their goals are more self-oriented. For example, experiments show that doing something benevolent for others, even when you will never meet the beneficiary, increases your positive mood and energy.”

A 62-year-old Japanese man was arrested for eating his fill of sushi with no way pay for it. Police say the guy spent six hours eating plate after plate of sushi and downing a total of ten cans of beer — knowing full well that he had just 10 cents in his pocket. When it became obvious to the wait-staff that the man was trying to stiff them, they called police.

A Texas high school student arrived to take his final exams in a hazmat suit after his family said the district isn't doing enough to protect students and families from COVID-19. Houston teenager Mason Kalkofen showed up to Spring Woods High School's campus in a full suit of personal protective gear after the school district mandated that virtual learners take their final exams on the school's campus.“I'm having to go in a hazmat suit,” Kalkofen told KTRK-TV. “That way I can protect my family.” Kalkofen's mother, Margarita, said she is at a high risk of serious complications if she contracts COVID-19. The family said they asked the school to allow the teenager to take his exams virtually, but the request was refused. They said multiple letters have been sent home informing families of positive coronavirus cases at the school. (https://bit.ly/3mDsJJq)

Incensed that his fellow Floridians were not wearing masks to the pharmacy and supermarket, a 62-year-old man yesterday warned on Facebook that if he were to test positive for the Coronavirus, “I will head right to Publix and empty every Clip I own!” Police say that Robert Kovner’s post declared that, “I FIND it criminal that you enter the supermarket or pharmacy without a mask, as if you are either too stupid to understand the danger you’re spreading or so selfish that you don’t give a f--k that your endangering others?” The post was eventually deleted, but not before it came to the attention of police, who questioned Kovner at his home in Sebring, a central Florida city. Citing the “significance of the threatening post made on Facebook,” Kovner was arrested for threatening to conduct a mass shooting, a felony. (https://bit.ly/3agma9k)

A Jacksonville schoolteacher was busted for trying to get drugs delivered to her while she taught at an elementary school ….. FLORIDA (https://bit.ly/2OGIUHK)

How Knitting Is Helping Men Recover From Addiction
https://www.sunnyskyz.com/good-news/4085/How-Knitting-Is-Helping-Men-Recover-From-Addiction