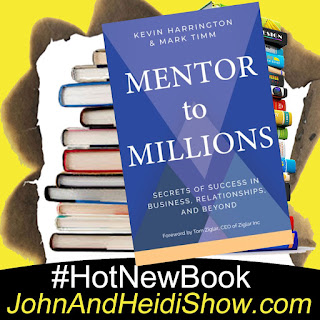 Today we visit with Mark Timm best selling co-author of Mentor To Millions. He and Kevin Harrington (an original member of the TV Show Shark Tank) put this book together to help people get a better start to the new year!

In a study of people age 30 and under, over 70 percent said they have to be connected, no matter where they are.

A study by the American Academy of Medicine found that NINE in TEN college kids suffer from the fear of being without a smartphone. (https://bit.ly/37Ugunm)

A couple who crashed their car into a power pole in South Africa didn’t think about insurance claims or calling the police. They wanted to get wet. Officers had to rescue the man and woman from the ocean after they hit the pole in the middle of the night, then decided to go swimming. The pair was brought to shore and both were found to be drunk.

According to Carole Baskin, the hit Netflix show “Tiger King” was a “freak show” that “totally missed the mark.” She’s upset because she thought that “Tiger King” would “change the world in the way people thought about captive tigers.” (https://eonli.ne/37Fba7i)

ESPN’s ratings for this year’s Michael Jordan Documentary were much higher than expected.(https://bit.ly/2wXXPYr)

Prior to Billionaire Steve Cohen purchasing the team this year, Alex Rodriguez and Jennifer Lopez were trying to buy the New York Mets. https://bit.ly/2RW7JB0

Apple is changing the privacy features on its phones to make it harder for Facebook to track people. (https://bit.ly/3rxqYkB)

Wildfires ravaged over one million acres of land in California in one week this summer. (https://bit.ly/3aNXo4m)

Doctors say drinking artificially-sweetened drinks like Diet Coke could make you more likely to put weight on. Researchers (University of South Australia) found that people who consume low calorie sweeteners (LCS) don’t reduce their overall sugar intake. The lead researcher said: “Consumers of artificial sweeteners do not reduce their overall intake of sugar. They use both sugar and low-calorie sweeteners and may psychologically feel they can indulge in their favorite foods. Artificial sweeteners can also change the gut bacteria which may lead to weight gain and risk of type 2 diabetes.”

New research shows that people have been mass purchasing plants during the Coronavirus lockdown. (https://bit.ly/2VrPndt)

A North Carolina doctor was arrested for watching a movie on his phone when his self-driving Tesla crashed into a police car. It’s illegal to watch any form of video in any type of vehicle, even if it’s on auto-pilot. (https://bit.ly/2JrpsiM)

Credit card companies are decreasing credit limits for people facing hard financial times in an effort to cover their own losses. (https://yhoo.it/2VvzySM)

Earlier this year, an Idaho woman was arrested for violating the stay-at-home order after she held a yard sale. The judge set bail at $1,000.(https://bit.ly/2xQWN0y)

Men lean back in their chairs while women lean forward.

Police in Argentina caught a burglar after he fell asleep inside the house he was robbing. The owner of the house found the sleeping crook and she and another woman attacked him with brooms until the police arrived.

A St. Paul man has been charged after allegedly carjacking five people in the span of an hour and ten minutes in Minneapolis. His arrest and charges were part of the “carjacking crackdown,” in which the Minneapolis Police Department and the Hennepin County Sheriff’s Office announced they had arrested approximately fifty people for the crime. 20-year-old Brandon Lee Rock was charged in Hennepin County with five counts of first-degree aggravated robbery and one count of assault with a dangerous weapon. Between 7:00 a.m. and 8:10 a.m. Rock and an unnamed young boy approached multiple cars and robbed the drivers. Officers executed a search warrant at around 2400 Ogema Place. While searching the residence, officers found multiple personal items believed to belong to the victims and a loaded 9mm handgun. Rock was at the address and was arrested. If convicted, Rock could serve up to 107 years in prison. (https://cbsloc.al/3h6eb3B)

A man was caught on camera rollerblading naked down an eight-lane Ohio highway — wearing only a giant plush panda head. The roller-streaker was seen zipping at a remarkably high speed while clutching a golf club on I-670 in Columbus Tuesday — irking drivers who honked and gawked. “This dude’s on the freeway naked!” one stunned motorist can be heard saying as he shoots wild footage of the incident. When the driver honks, the birthday-suited blader moves to the shoulder of the highway to let his car pass, the now-viral video shows. The oddball’s identity wasn’t known as of Thursday, according to authorities who told WTRF-TV that the naked guy’s choice of transit was their biggest concern. “Pedestrians are not permitted on interstate highways,” a spokesman at the Ohio Department of Transportation said. “There are signs posted at all the entrance ramps. This is a safety issue.” (https://bit.ly/3h3RQnx)

A Clearwater woman was arrested for taking off her pants and wearing them as a mask while entering a Target ….. FAKE NEWS

She Walked 12 Miles To Work To Feed Her Children. Local Deputies Surprised Her With A Free Vehicle
https://www.sunnyskyz.com/good-news/4087/She-Walked-12-Miles-To-Work-To-Feed-Her-Children-Local-Deputies-Surprised-Her-With-A-Free-Vehicle