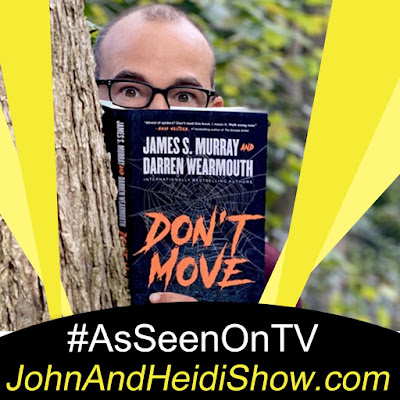 Today we visit with James “Murr” Murray from the Impractical Jokers TV Show. He has a new novel that came out last fall. “Don't Move” is a thriller. It's available now - https://amzn.to/3qb2bBo

A One Poll survey found that the majority of Americans will quit their New Year’s Resolutions by February. (https://bit.ly/2LqtloG)

A One Poll survey found that two-thirds of parents are teaching their children ways to unwind after a chaotic 2020. (https://bit.ly/2Xng2YI)

A Connecticut woman who eluded cops as the getaway driver in a liquor store robbery tried to sell the stolen booze on Snapchat. 21-year-old Aysia Ryan of Windsor, was busted Tuesday on charges including third-degree robbery and third-degree reckless endangerment in an August 28th heist at M&R Liquors in South Windsor. Police say that Ryan and an unidentified male accomplice entered the store and stole roughly $800 worth of alcohol. The pair fled when confronted by employees, including one who was struck on the arm by the getaway car Ryan was driving. “Officers attempted to stop the vehicle leaving the scene but were unable to do so, as Ryan began operating erratically,” police said in a statement. Investigators suspect the vehicle had been involved in several other robberies in nearby towns and managed to track down Ryan in part using surveillance video from the scene. Police said Detectives also discovered Ryan’s Snapchat account, where she offered the ill-gotten booze for sale. Ryan, who was arrested Tuesday, remained held on $215,000 bond at York Correctional Institution. (https://bit.ly/35iHSdi)

Former “To Catch A Predator” host Chris Hansen says Jeffrey Epstein was once a target in a potential undercover sting that never went down. (https://pge.sx/2LAAbbt)

There’s this thing that happens when a person sees a brand new human. Their hands turn into large magnets that pull straight up and out with a primal need to touch that baby. Just one big problem: the germs. Like the zoo has to post signs all over with the very common sense directive to not tap on the glass, parents also need to remind strangers that their babies are not for touching. For these moments, Etsy shop LittleLoveCanada has a solution: The “Please Don’t Touch” sign, which clips to your child’s car-carry seat or stroller.

Human hands evolved the way they did not so we could use tools but so we could punch each other better (University of Utah study). The lead researcher argued that we could have ended up with any of several different shapes if it were just about holding tools. But only one variation would allow us to make a fist and beat the snot out of each other. And that’s the one we got. Our fingers are short enough to curl into our palms, unlike other primates, and our glorious opposable thumbs can reach across the fingers to buttress the fist itself for maximum punching power.

Just last year, the idea of a voice-controlled refrigerator would’ve seemed silly. But in the age of COVID, telling the fridge to open itself so you don’t have to touch a germy door handle makes perfect sense. LG has introduced a 2021 line of InstaView fridges that can open the door with a voice command. That’s useful when you have your hands full with groceries, of course, but it could also be helpful during a pandemic where you have to be mindful of what you touch.

Did you think Facebook was just for posting pics of your grandchildren, sunsets and dogs? You should think again. Facebook has been linked to increasing the brain power in the elderly. The older generation is turning to the popular social media site to keep their minds sharp. A study found that the elderly, after learning to use Facebook, performed 25 percent better in tasks designed to measure their ability to continuously monitor and to quickly add or delete the contents of their working memory.

Cats have fewer toes on their back paws

Like most four-legged mammals, they have five toes on the front, but their back paws only have four toes. Scientists think the four-toe back paws might help them run faster.

A man escaped unscathed after a wild boar chased him around a hospital parking lot in Poland. When the man tried to flee, the boar pursued the man around a parked car until it apparently got bored. The man did not need hospital treatment.

A Texas woman is accused of stealing a $10,000 dog and then driving for more than a mile as a store employee who tried to stop her clung to the hood of her car. Video captured store worker Alize James on the front of sedan as it sped through Harris County. "I was hanging on for dear life," James told NBC affiliate KPRC of Houston. She was working at Bully Kamp when a couple came in and discussed financing options for buying the exotic bully puppy, but while she stepped away, the couple grabbed the dog and ran, according to the station and court documents. James tried to stop them after they got in the vehicle, but the car accelerated and she was thrown onto the hood. The video shows that she remained on the hood until the car stopped. A male passenger got out, punched James, and threw her off the vehicle. Police are still trying to identify the man involved. (https://yhoo.it/2LbToQD)

A California jogger who allegedly spat on random people for not wearing face masks has been arrested. 38-year-old James Howard was arrested after police in Glendale began receiving reports of a “shirtless male jogger who was spitting on random people outdoors.” That day, police were following up on the investigation when they got a call that a male jogger had just spit in a victim’s face. Responding cops found Howard, who matched the suspect’s description. He was arrested and charged with battery, elder abuse and a hate crime. Howard’s victims ranged in age from 13 to 78-years-old and, in some incidents, he used racial slurs during his assaults. Howard later admitted to police he committed still more assaults that had not been reported. Police say so far eight incidents have been linked to Howard. (https://bit.ly/3s9b6VD)

Man Hospitalized For 2 Months Says Wife's Voice Helped Him Out Of Coma
https://www.sunnyskyz.com/good-news/4105/Man-Hospitalized-For-2-Months-Says-Wife-039-s-Voice-Helped-Him-Out-Of-Coma