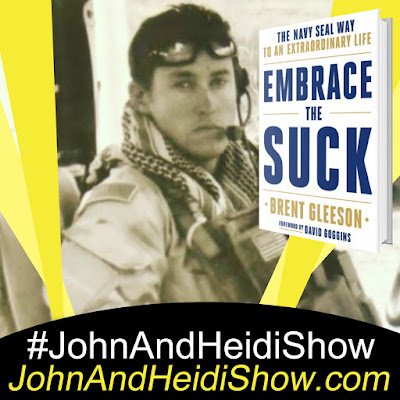 Today we visit with Brent Gleeson, a member of SEAL Team 5, some of the first SEALs deployed to Iraq in early 2003. He completed combat deployments in Iraq, Africa, and other theaters of war. After returning to civilian life, Brent earned an MBA and has built award-winning, multi-million dollar organizations that have repeatedly landed on the Inc. 500 list of fastest growing private companies. He is the author of TakingPoint and has starred in several reality shows including Mark Burnett’s ‘Stars Earn Stripes.’

His NEW BOOK “Embrace the Suck” is available now - https://amzn.to/3sllvO5

A study (University of Chicago) polled married people and found that, on average, it took them just 172 days to decide that they wanted to get hitched. That’s about six months — and it’s less time, researchers found, than most people estimate they’ll need before making that big call. Surveyed singles told the researchers that they’d need about 210 days to make up their minds about their potential suitors.

“And the cocaine,” a Florida man hinted, as he was being loaded into the back of a Collier County Sheriff’s patrol car. Deputies asked him to clarify. “I have cocaine in my butt,” 56-year-old Mustapha Ouardi answered. Ouardi had called 9-1-1 three times early last Wednesday morning from a McDonald’s— he said they had gotten “his burger order wrong twice.” When deputies arrived at the McDonald’s, employees said Ouardi had been yelling and cursing at staff over his mistaken order, and they wanted him taken from the premises. The deputy escorted the disgruntled customer from the burger joint. Upon searching his pockets, the deputy found marijuana folded into a napkin. While he was being placed into the patrol car, he then admitted to having another drug tucked away. He is facing charges for trespass of a structure or conveyance, marijuana possession not more than 20 grams, and resisting law enforcement without violence. (https://bit.ly/3hZKIc5)

Sparks flew on “The View” this week as Joy Behar told Meghan McCain she didn’t miss her while she was on maternity leave. Joy and Meghan say they’re friends off the air. (https://pge.sx/38hFxkK)

Jennifer Lopez made headlines by posting a photo of her bikini clad bum on Instagram Thursday. (http://dailym.ai/38k5MH7)

A public health campaign in the UK said kids between the ages of 4 and 10 consume the equivalent of 5,500 sugar cubes a year. The sugar comes in the form of juices, soft drinks, cookies, breakfast cereals, desserts, etc. Experts say a five year old shouldn’t have more than 19 grams of sugar per day — that’s five cubes.

In Spain, a burglar fell asleep in front of the TV after eating several plates of food in an apartment he had broken into. The owner of the apartment returned home to find the man asleep on a sofa with the TV on. Thinking it was his son, he was about to put a blanket over him for warmth when he saw it was an intruder and tiptoed out to call the police.

West Virginia has been named the fattest state.

Blue whales eat half a million calories in one mouthful

Those 457,000 calories are more than 240 times the energy the whale uses to scoop those krill into its mouth.

In Beijing, bank surveillance video showed a man wearing a red hooded sweatshirt approach an ATM at 1:50AM and light his jacket on fire. He then jammed it into the card reader slot and left it burning before leaving the scene. The man told police he got the idea “from TV shows” but abandoned the plan when the machine did not spew money as he expected.

A man was arrested Wednesday near Tokyo for allegedly forging and sending out dozens of special popsicle sticks to an ice cream manufacturer so they could be redeemed for popular Pokémon cards by the company. 43-year-old Takashi Ono is suspected of attempting fraud after he sent twenty-five fake popsicle sticks in November last year to confectioner Akagi Nyugyo Co. The company ran a competition last year in which people could send in rare lucky sticks from its popular popsicle brand Garigarikun in exchange for Pokémon game cards created for the event. The limited sticks were engraved with the words “You win a Gari-Pokemon card,” which could only be seen after consuming the ice cream. Akagi Nyugyo contacted the police after receiving multiple lucky popsicle sticks from what was believed to be one person. The ice cream manufacturer has warned consumers of the possibility that “fake lucky popsicle sticks are being sold” online. (https://bit.ly/3buFHHB)

A Michigan family is happy to have their sweet puppy back home after what was supposed to be an ordinary delivery ended in heartbreak. Ashley Swinton was simply expecting a food delivery to her home from DoorDash. According to the news outlet, when the individual went to make the delivery, she left with the family's 8-week-old puppy named Bella. The woman was caught on camera taking the dog. “The video evidence, in this case, is very compelling,” said Detective Brian Price with Warren police. “This is a new one even for me. Pretty shocking when you watch the video and see it happen right in front of you.” “You can see her pet the dog, and rub the dog seeing if it was vicious," Swinton told WXYZ. "Then scoop the dog up and take the dog to her car.” Police found the 26-year-old, who has not been identified yet. Charges are expected.(https://bit.ly/3sdkKXu)

A Florida grandmother was fined $5000 for running an illegal daycare. She was watching her 12 grandchildren without a license.