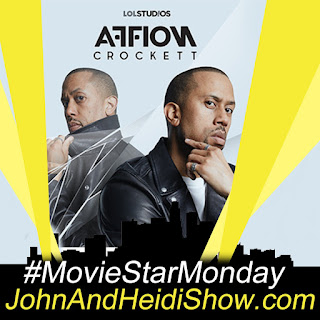 It's a #MovieStarMonday with Affion Crocket. He can be seen in movies like The Wedding Ringer, Pixels and many more. He's also a very funny comedian, so this is also a #ComedyCall as we talk about a cool opportunity he had in 2020. Affion was the VERY FIRST PERSON to have a ONE HOUR special on Kevin Hart's new Laugh Out Loud Network! https://laughoutloud.com/

DIRECT LINK TO THE SPECIAL https://found.ee/Mirror-II-Society

A study by the University of Boulder in Colorado found that breathing in poor air quality can upset your stomach. (https://bit.ly/3aIszy1)

Researchers from Rutgers University reveal quite a few Americans are opting to buy a new firearm. Notably, the study finds that essential workers are particularly likely to purchase a gun within the next year. (https://bit.ly/34yaChI)

She threw the dog under the bus. An apparently inebriated Canadian woman drove into a ditch — and had a far-fetched excuse for the police. According to cops, the woman allegedly stated, “The dog was driving.” Royal Canadian Mounted Police found the 58-year-old motorist and her pooch on December 1st, after receiving a report that someone had driven into a ditch in Vancouver Island. “The woman told police that it was just her and her dog inside the vehicle at the time it was driven into the ditch – and that the dog was driving.” But cops sniffed that something about her claim was off — and suspected the woman had been drinking. She was barred from the road for ninety days after allegedly refusing to provide a breath sample. Her name wasn’t released. (https://bit.ly/2Wv5UNo)

Tiger Woods’ former mistress Rachel Uchitel was on the short list to replace Dorinda Medley on “The Real Housewives of New York.” (https://pge.sx/37Pkgyt)

The MTV Music Video Awards became the first awards show to be staged in the COVID-19. (https://bit.ly/3nTx38T)

The director of “The Exorcist” shut down rumors that he’s attached to a remake of the horror classic. (https://fxn.ws/2KtaNUB)

First date? New business meeting? New research shows you only have 27 seconds to make a good first impression. The research investigated the key contributors and timings to a positive first impression and found that smiling, being polite, smelling nice, being a good listener, and making eye contact are among the leading factors. Besides job interviews, there’s no better time to make a good first impression than on a first date, and the research shows the average person knows within 15 minutes into a date whether or not they want a second date.

Female Author Diane Shah claims that Yankees Legend Mickey Mantle drunkenly hit on her when she was a reporter for the team in the 1970’s.(https://pge.sx/3cECyCf)

Confirming what many couples already knew, a government study concluded it’s healthy to be married. Sure, the majority of husbands pack on some extra pounds. But overall, married people are sick less often and more active. They smoke and drink less and in general feel better than single, divorced, never married or even folks just living together. In the study, some 70.6 percent of husbands were overweight or obese compared with 65.1 percent of all men. For females, 48.6 percent of married women were overweight or obese, virtually the same as the 48.5 percent of women in general.

A UK couple hastily re-arranged their wedding in just two hours to avoid their special day getting scrapped by London’s last-minute lockdown.(https://bit.ly/3rkHKTK)

A 36-year-old Ocala woman spent a night in the Marion County Jail for allegedly battering a man after she caught him viewing pornography on his phone. A Marion County sheriff’s deputy responded to a disturbance report and met with the victim in his truck a few blocks away from the incident location. The victim said he got into a heated argument with Danielle Whitt over him making toast instead of rolls for breakfast. The victim said to avoid confrontation, he went into his bedroom and started watching a video of a half-naked woman on his phone. He said Whitt came into the bedroom, observed him watching the video and punched him in the chest out of anger. The victim said in order to defend himself, he grabbed Whitt in the back of the neck and pushed her away. He said Whitt continued her attack by punching him four or five more times in the forearm, causing injury. The deputy observed a dark-colored bruise on the victim’s forearm. The victim said Whitt has hit him several times before and he just wants her out of the residence. Whitt was charged with simple domestic battery. (https://bit.ly/2YwycZh)

A man caught driving at 130-mph on a motorway in Surrey in the U.K. said he was trying to avoid catching Coronavirus. Police described the incident on Twitter, posting: “An officer stopped a driver who was speeding on the #M25 at 130-mph.” “His reply to why he was speeding was 'I thought the faster I went the less chance I would catch coronavirus'. Driver reported to court. #slowdown.” Incidents of speeding became more common as a result of the quieter roads around the U.K. during the lockdown. (https://bit.ly/2Xy1Aic)

A Delton man was shot by a mother of three after breaking into her home and claiming he was being chased by dinosaurs ….. FLORIDA (https://bit.ly/2wNcoOw)