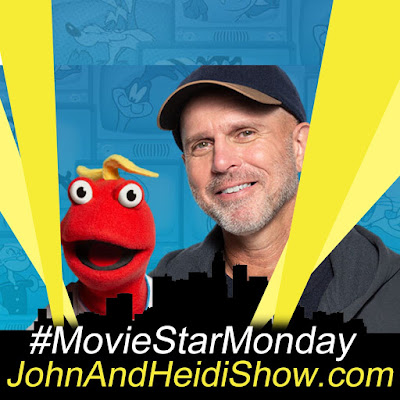 It's a #MovieStarMonday with Bill Leff (Major League, Major League II) he has an awesome new job at MeTV! They have a new weekday morning show called "Toon In With Me” Monday-Friday from 7:00am to 8:00am ET. In addition to this fun show each weekday... MeTV has a new Saturday morning cartoon block “SATURDAY MORNING CARTOONS” from 7:00am to 10:00am ET.

A study by the American Psychological Association found that the majority of people would not want to know their fate in life, even if it’s positive.(https://bit.ly/3qdZu1I)

A new study is urging the release of all non-violent criminals who are in prison on drug charges. (https://bit.ly/39nUoJv)

A Pinellas County charter school dean and his wife in Palm Harbor, Florida are accused of supplying drugs and alcohol to their underage babysitter on dozens of occasions. According to WFLA in Tampa, Florida charter school dean Adam Thayer and his wife Misty Mitchell-Thayer are accused of supplying the underage teen babysitter, now 17, with beer and marijuana whenever they went out. The pair also encouraged the teen to get high and drink on the job, the Pinellas County Sheriff’s Office alleged. “Get drunk! Pass the f**k out! … If you want to smoke Adam has weed there,” an alleged text to the teen read. The Florida school dean and his wife are accused of giving the girl alcohol and drugs dozens of times over a two-year span. Thayer and Mitchell-Thayer are also accused of giving drugs and alcohol to the teen and her friends at their home for parties. Thayer has been arrested and charged. Police added that Mitchell-Thayer has also been arrested, but will be formally charged at a later time. (https://bit.ly/35zh6gP)

A new book called “Finding Freedom” claims Prince Harry and Meghan Markle had a terrible year because their nanny moved back to the UK. (http://dailym.ai/3qqZegj)

Prince Harry and Meghan Markle are expected to reunite with the Royal Family this spring for the first time since Brexit. (https://pge.sx/3i7FuuX)

HBO Max has confirmed plans to do a revival of “Sex And The City.” (http://dailym.ai/3seKEdl)

The American College of Foot and Ankle Surgeons reminds us that falls on icy surfaces are a major cause of ankle sprains and fractures.

Madonna is being criticized for visiting five countries in the past three weeks despite strict travel restrictions around the globe. (http://dailym.ai/3bugcpL)

A video has gone viral of a teenager in China who got his tongue stuck to a flagpole in three degree temperatures. (https://bit.ly/2MJCIjV)

Environmental crusader Bill Gates is being criticized after putting in a bid to buy the world’s largest private jet operator just one week before releasing a book about combatting climate change. (http://dailym.ai/38B37J6)

Two gorillas have tested positive for the Coronavirus at the San Diego Zoo’s Safari Park. (https://cbsloc.al/3sjGmS8)

The world’s oldest orangutan died at the Oregon Zoo after she was euthanized on Sunday. Inji was 61-years-old. (https://bit.ly/3nxyhp1)

Six inmates escaped from a California jail on Sunday and remain at large.(https://bit.ly/3bqF1Tv)

New Mexico State University is preparing to host the world’s largest conference dedicated to chili peppers. The 2021 New Mexico Chile Conference is February 2 and will be all virtual this year. The university’s Chile Pepper Institute has been organizing the annual conference for about three decades. The conference draws experts in breeding, processing, pest management and sustainable ways to give growers a competitive advantage. Chili has long been one of New Mexico’s signature crops. It’s the state vegetable! https://cpi.nmsu.edu/events-2/

The heads on Easter Island have bodies. The iconic stone heads protruding from the ground on Easter Island are familiar to most, but many don't realize what lies beneath the surface. In the '10s, archaeologists studying the hundreds of stone statues on the Pacific Island excavated two of the figures, revealing full torsos, which measure as high as 33 feet.

Mexico City has opened its restaurants in defiance of Coronavirus Lockdowns.(https://tmsnrt.rs/2XB0bWE)

A South Florida nurse is charged with using over $400,000 in illegally obtained coronavirus relief funds for his own personal expenses. 55-year-old Giraldo Caraballo of Miami received a Paycheck Protection Program loan and an Economic Injury Disaster Loan after allegedly submitting false information about his company, Professional Skills Inc. Investigators said Caraballo falsely claimed he had twenty-eight workers with an average monthly payroll of $168,000. The nurse was charged with engaging in transactions in unlawful proceeds and making false statements to a financial institution. The Paycheck Protection Program, known as the PPP, has been a major component of the federal coronavirus aid that delivers forgivable loans to small businesses struggling from the pandemic. (https://bit.ly/35uAD1L)

Tampa, Florida police say 51-year-old Scott Anthony Massa was hospitalized with injuries after burning himself while trying to set a home on fire early Sunday morning. Police say Massa broke a window at a home around 5:40 a.m. Then, according to the Tampa Police Department, he tried to throw a bucket full of accelerant into the home. But it ignited, exploded, and set him on fire. Police say the residence was not set on fire and no occupants were injured. Canine units tried to find Massa, but police say the trail was lost after he got into a vehicle and drove away. After Massa’s description, including his injuries, was broadcast to all officers, an officer working extra duty at St. Joseph’s Hospital detained Massa when he showed up to the facility with obvious injuries. Massa was taken to the Tampa General Hospital burn unit and his vehicle was impounded. According to TPD, arson investigators are taking the lead to determine appropriate charges. (https://bit.ly/3oDGoBV)

A Port St. Lucie man was arrested for stealing a car after he drove to court to face charges of grand theft auto ….. FAKE NEWS (Although, this did actually happen in Connecticut once https://bit.ly/2LHlKCa)

This Wendy's Manager Is Making A Difference, One 'I Love You' At A Time
https://www.sunnyskyz.com/good-news/4109/This-Wendy-039-s-Manager-Is-Making-A-Difference-One-039-I-Love-You-039-At-A-Time