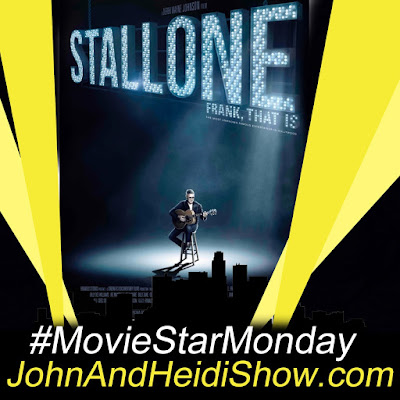 It's a #MovieStarMonday with Frank Stallone, an accomplished musician that received three Platinum Albums, ten Gold Albums, five Gold Singles and seen him top the charts worldwide. His albums have won praises from around the music industry, such as from Frank Sinatra and Tony Bennet! Frank’s movie soundtracks have audiences across the globe gripped to some of the most iconic movies; including The Expendables 2, Rocky I, II and III, Rambo II, Paradise Alley, Over the Top and the Saturday Night Fever sequel Staying Alive, which earned him Golden Globe and Grammy Nominations. All the while Frank’s on-screen career has seen him act in over 75 films and TV shows, including Tombstone and the cult hit Barfly.

So why does Frank remain one of the least known famous faces in Hollywood? Find out as we go behind the scenes of Hollywood's elite, in this fascinating documentary, told by Frank himself and those that know him best.

Researchers at Oxford University found that there is no limit to the benefits of exercise to the heart, so the more active you are the longer you’ll live. (https://bit.ly/2XShXEX)

In Czechia, a guy got himself locked inside a pizzeria just so he could have free access to beer overnight. When the restaurant’s staff left, he broke into a cooler containing a keg, disconnected the pipes leading to the tap, put them in his mouth and drank as much as he could. The man, drunk and fast asleep, was found by an overnight cleaning crew. The man will have to pay for the beer he drank.

A Canadian reporter was harassed on live television by a man in a car who shouted, “F her in the P” before driving away. (https://bit.ly/39QR36c)

Justin Timberlake confirmed to Ellen DeGeneres that he and Jessica Alba welcomed a second child. (https://www.dailymail.co.uk/tvshowbiz/article-9158393/Justin-Timberlake-CONFIRMS-Jessica-Biel-welcomed-second-child-Hebrew-origin.html)

Kelly Rohrbach, star of the "Baywatch" remake, showed off her bikini bod while strolling the beach in Santa Monica. (https://www.dailymail.co.uk/tvshowbiz/article-9158667/Kelly-Rohrbach-stuns-bikini-enjoys-summer-like-weather-beach-Santa-Monica.html)

According a report, the number of death row prison inmates over the age of 60 is growing.

In Turkey a man stopped to help victims of an accident involving two motorcycles and a truck. After putting a splint on a victim’s broken leg, the man went on his way. A short time later a teenager plowed into him. The man landed in the same hospital next to the same man he had helped just hours before.

“Cord cutting” might still be a thing for those walking away from cable subscriptions, but the world of subscription streaming services is pretty packed — so experts think “stream slashing” will one day be a thing: consumers looking at their entertainment budget and deciding enough is enough. What will it mean for streaming services? Know one yet knows, but it’s thought that the typical household will keep it at four or fewer paid streaming services.

The third Monday in January became a black day in 2005 when Cliff Arnall was paid by a public relations firm to identify the most miserable date on the calendar in order to promote a vacation company. The psychologist and self-styled ‘freelance happiness guru’ chose the date based on a pseudo-mathematical formula involving the weather, debt, motivational levels and time elapsed since Christmas. Arnall has since admitted the idea of a single most depressing day was “not particularly helpful” because it became “a self-fulfilling prophecy” and that achieving happiness and being less materialistic was a year-round aim. He said the third Monday in January should instead be used to “get a bit of perspective” about our own lives.

The feeling of getting lost inside a mall is known as the Gruen transfer.

We've all heard how casinos are designed to deliberately disorient visitors, causing them to lose track of time and where exactly they are. But did you know that there's a similar strategy behind the design of shopping malls as well? Officially known as the "Gruen transfer," this phenomenon was named after Austrian architect Victor Gruen, who identified how an intentionally confusing layout could lead to consumers spending more time and money in a shopping venue (though he would later disavow the approach).

Switzerland is going to hold a direct vote on removing the government's legal authority to order lock-downs. (https://on.wsj.com/35TaZ77)

A Japanese brewery that canceled the release of its newest beer because of a spelling mistake on the cans has decided to sell it anyway after drinkers offered to take the beers for free. Sapporo Breweries’ new Kaitakushi Beer Tailored was scheduled to be released at FamilyMart, a large chain of Japanese convenience stores, on Tuesday. However, the companies called off the new beer after discovering an “embarrassing” error on the cans. The South China Morning Post reported: the word “lager” was spelled as “lagar.” The beer cans feature both Japanese and English writing. They were already produced by the time the brewery realized its error. Sapporo said there were no problems with the beer itself and after canceling the release, the company was reportedly “inundated with offers from our customers to help out by drinking them.” With so much interest in the beer, Sapporo and FamilyMart decided the typo wasn’t such a big deal after all. On Wednesday, they said they would begin selling the beer anyway starting on February 2nd. (https://fxn.ws/3iicJfd)

Three-time convicted burglar Joshua Harris left something pretty valuable at the scene of a Chicago crime. It all started when the front door intercom rang in a Wicker Park resident’s apartment. A male voice said they were looking for “Ray,” the resident recalled. Then, they heard the door buzz and the call dropped off. Minutes later, two other building residents were in their bedroom when they heard footsteps. One of them looked out and allegedly saw Harris rifling through a purse on their couch. Startled to see someone in the apartment, Harris bolted out the door and the victim ran after him. Outside, the resident flagged down a passing car and climbed in. According to prosecutors, the driver continued the pursuit until Harris, age 27, ran into a nearby hotel. Police detained Harris on the hotel’s seventh floor a few minutes later. That’s when the second roommate showed up carrying a phone that, against all odds, had a picture of Harris as its lock screen image, according to prosecutors. The burglar had dropped the darn thing in their apartment, the woman told police. Harris was charged with residential burglary. (https://bit.ly/2KaxuwK)

A Miami grandmother was fined for playing her music too loud. She had Cardi B playing at an extremely high volume at 11:45pm. FAKE NEWS