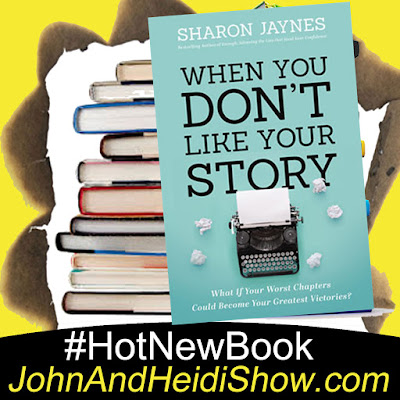 Today we visit with bestselling author Sharon Jaynes as she shares her secret to living a better story in her new book. “When You Don’t Like Your Story:What If Your Worst Chapters Could Become Your Greatest”

Researchers believe that a prehistoric pig painting discovered in Indonesia is the world's oldest depiction of an animal at 45,000 years old. (https://bit.ly/39HTwzB)

A survey reveals that half of all homeowners have had problems with their neighbors.

Authorities say the actions of an intoxicated man who drove his vehicle up the stairs of the Wisconsin Capitol grounds Saturday night did not appear to be politically motivated. Police said 44-year-old Willie Burks drove up the exterior steps on Martin Luther King Jr. Boulevard and around the exterior of statehouse just before 9:30 p.m. He then left the capitol grounds and drove against traffic before parking his vehicle. Burks was arrested for his third drunken driving offense and taken to the Dane County Jail. He was also charged with reckless driving, operating while suspended, driving against traffic, and driving on the sidewalk. Madison Police Lt. David Jugovich said there was no indication of a threat to the Capitol, which is under increased security by state and local police and the National Guard. (https://bit.ly/3c6cJOz)

Kim Kardashian and Kanye West have stopped going to marriage counseling as their divorce draws near. (http://dailym.ai/39Q2ESQ)

Kim Kardashian and Kanye West’s marriage issues will be featured on the next season of “Keeping Up With The Kardashians.” (https://pge.sx/3938ili)

Saint Maud is being called the first “must-see” horror movie of 2021. It tells the story of a possessed woman who believes God is telling her to do terrible things. https://bit.ly/2XT5elJ

Controversial YouTuber Pewdie Pie is making a comeback to social media after a four-year hiatus. The Swedish Vlogger is the most popular YouTuber in the world with over 108 million subscribers. (https://bit.ly/3qxmitw)

A California man with a fear of catching COVID was arrested after living at O'Hare International Airport in Chicago for the past three months. (https://bit.ly/39KDTrc)

Are you on a diet? Maybe you’re not calling it a diet — you’re just eating, well, differently. Either way, a study said the average adult will try 126 different diets during their lifetime. Assuming you begin adulthood at 18, that’s about two diets a year.

Three out of four American dog owners believe their pets can forecast bad weather better than the paid professionals. A whopping 72% of canine owners contend their pooches can sense changes in the climate.

Twitter CEO Jack Dorsey is said to be working remotely on an island off the coast of Indonesia. (https://bit.ly/2XQOXxp)

Three bippity-boppity-boos are living happily ever after in a land far, far away — Seattle, Washington. The thriving throuple — who identify as Princess Fairy Lolly, Gunther the Troll, and Ion the Leprechaun — is living out the fairy-tale romance of their dreams. Spellbound by love, the three humans-turned-mythical creatures are building a “dream haven” together in their polyamorous partnership. “We are in what we would call a closed polycule,” Princess Lolly explained on the UK show “This Morning.” “We consider ourselves a closed family unit. “The more people, the more everyone’s time becomes divided, and we have a really good fluid working family unit,” the queen of the castle added. Naturally, Twitter talkers are waving their wands over their keyboards, sharing stunned reactions to the threesome’s supernatural setup. Tragically, the magic of Princess Lolly’s fairy dust couldn’t protect the threesome from the wicked witch that is COVID-19. Each member of the power pack contracted the virus after one of them paid a visit to “the tooth fairy” — more boringly referred to as the dentist. (https://bit.ly/39oRgNE)

A Florida Woman who decided to make an anti-masker stand at an Einstein Bros. bagel shop in Boca Raton was arrested for trespassing following a recorded confrontation with police that could serve as a Karen Masterclass. When Cindy Falco DiCorrado, a 61-year-old resident of nearby Boynton Beach, refused to wear a mask upon entering Einstein Bros. around 11:00 a.m., a store manager called cops. While waiting for Palm Beach County Sheriff’s Office deputies to arrive, DiCorrado declared, “I’m an American and I’m allowed to breathe. And it’s against my religion. And it’s against the amendment.” A deputy calmly tried to convince DiCorrado to leave the shop, but she told him, “You need to read the Constitution!” and “Get your hands off of me.” She also claimed that the cop was “kidnapping” her when he grasped her wrist. Charged with trespassing and resisting arrest without violence, DiCorrado was booked into the Palm Beach County jail, from which she was released after posting $2,000 bond. (https://bit.ly/2XQ6rdu)

A Miami Man with no arms was charged with stabbing a Chicago tourist ….. FLORIDA (https://bzfd.it/2FOTz00