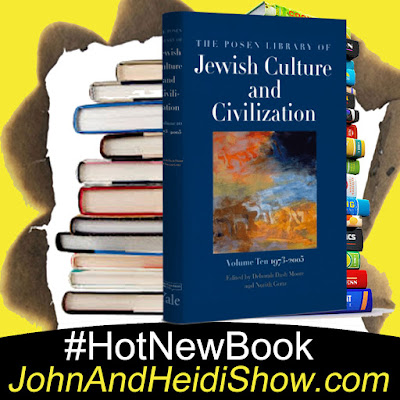 Today is Holocaust Remembrance Day. We'll visit with renown Jewish Scholar Deborah Dash Moore, the Frederick G. L. Huetwell Professor of History and Professor of Judaic Studies at the University of Michigan and the editor in chief of The Posen Library of Jewish Culture and Civilization, a comprehensive, ongoing project to build an unprecedented collection of Jewish writings, political thought, religion, visual and performing arts, music, and cultural contributions from around the globe. PosenLibrary.com

A new study found that turning your computer camera off during work meetings can save the environment. The Researchers at Yale, MIT, and Purdue found that streaming video from your computer will increase your carbon footprint. (https://bit.ly/3sFsG3P)

A study found a link between sugary soft drinks and pancreatic cancer.

A study found that heart attack victims have less chance of surviving the higher up that they live in an apartment building.

Cannabis activists have come up with a way to entice more people to get the coronavirus vaccine: Give them weed. The group D.C. Marijuana Justice — the architects of Initiative 71, the 2014 ballot initiative that legalized pot possession and cultivation in the District — are plotting a cannabis giveaway around vaccination sites in the city. Those sites haven't been announced yet, but the organization is readying volunteers to distribute free baggies of marijuana at multiple vaccination centers as they come online. So far, local growers have pledged three pounds of cannabis to the giveaway, and organizers hope to collect a total of five pounds by the time they begin handing it out, according to D.C. Marijuana Justice co-founder Adam Eidinger. As an added bonus, the group also plans to give away seeds for a local cannabis strain named after former D.C. Councilmember David Grosso. Some of the seeds — dubbed "Grasso’s Green" — were sourced directly from Grosso, a cannabis advocate who departed D.C. politics at the end of 2020.(https://bit.ly/3ivEH7l)

A new report claims Armie Hammer was spoken to by police regarding his secret Instagram account where he discussed cannibalism. Armie was heckled outside a restaurant by a fan who called him a cannibal. (https://pge.sx/3c1jW2m)

Sara Thomas will become the first female referee in Super Bowl history after she was added to the roster for the league's championship game. (https://bit.ly/3sIEpi9)


The U.S. Army is testing an “Iron Man” suit for the next generation of combat. The suit can withstand major blows from guns and mortars. https://bit.ly/3nYSk00

Your coffee machine could be one of the dirtiest parts of your kitchen if not cleaned often. Bacteria, yeast, and mold could be growing in your machine because of irregular cleaning, and those little devils don’t discriminate — it doesn’t matter whether you have a coffee pot, a Keurig, or a fancy espresso machine. Researchers say the part of the machine that stores water is the biggest culprit of disgustingness: half of the coffee reservoirs tested contained mold and yeast. The intense heat from the machine will kill some of the bacteria, but it’s not saving you from all of it.

A guy in Germany tried to rob a store using a chainsaw. But the chainsaw had no gas so employees were able to resist and take it away from the robber.

There are an estimated 60,000 storage facilities in the United States. Not individual storage units — storage buildings, each with dozens or hundreds of storage units. Yeah, we’re a nation of hoarders. Our homes and storage units are filling up so now Americans are renting full-sized construction dumpsters to de-clutter. People are having the giant dumpsters dropped in their driveway and filling them up with years of stuff accumulated in basements, attics, garages and spare bedrooms. In fact, some dumpster companies are even marketing direct to home consumers. By the way, most in-demand city for self-storage units is Houston.

The wood frog can hold its pee for up to eight months.

Talk about having to go! Wood frogs in Alaska have been known to hold their urine for up to eight months, sticking it out through the region's long winters before relieving themselves once temperatures increase. The urine actually helps keep the animal alive while it hibernates, with special microbes in their gut that recycle the urea (urine's main waste) into nitrogen.

In Hong Kong, a woman who tried out a foot massager in a store had to be rescued by firefighters when her foot got stuck in it and the staff couldn’t get her out. After being stuck for 30 minutes, the woman was checked out at a local hospital and released.

In our “there’s something you don’t see every day” department, a local Crossville, Tennessee law firm is conducting a contest to give away a free divorce for Valentine’s Day. The firm, The Powers Law Firm Crossville, posted the following on Monday January 11th: “Here at the Powers Law Firm, we recognize the terrible year we have ell endured -- the COVID-19 pandemic, a divided nation, and economic hardship. That’s why we’re borrowing this idea from an attorney out of Murfreesboro, and we will be giving away a divorce to the winner of this contest on Valentine’s Day.” “Valentine’s Day, to some, is a reminder that they are trapped in a marriage that they cannot get out of, or for some other reason…this contest is limited to residents of the state of Tennessee.” The contest started this past Monday and runs until 5:00 p.m. central time Monday, February 15th, 2021. https://bit.ly/39xNd1L

Investigators say a tip from a convenience store clerk about a stolen donut led them to arrest a man accused of impersonating a police officer. The tip came from a 7-Eleven in Lehi on Sunday. According to an arrest report, police were told that a man wearing a “sheriff’s deputy” jacket had stolen a donut earlier in the day and left in a white Ford truck. Lehi police looked at the surveillance video of the truck and then tracked it down to a nearby motel parking lot. Officers were told it belonged to 47-year-old Daniel Mark Wright, who was staying in a room at the motel. “Officers knocked on the door and made contact with Wright as he opened the door and was asked to step outside. A female was also inside of the bedroom and was identified. While the door was open, I observed the green Salt Lake County Sheriff’s jacket hanging in the entry-way closet,” a Lehi Police officer wrote in the arrest report. Wright admitted he was at the 7-Eleven, but refused to answer any questions about the truck, which officers determined was stolen. Police arrested Wright for impersonation of an officer, receiving or transfer of a stolen vehicle, and theft. https://bit.ly/3qBaWov

A naked Florida man stole a marked police vehicle and crashed it in a wooded area. 22-year-old Joshua Shenker was arrested after Thursday’s crash on charges including theft of a motor vehicle, aggravated battery on a law enforcement officer, depriving an officer of means of communication or protection, and resisting an officer without violence. Officers responded to reports of a naked man running along Interstate 10 in western Jacksonville shortly before noon Thursday. Shenker was lying in the roadway when an officer stopped on the opposite side of the route. Shenker then ran across the highway lanes toward the officer. The redacted report didn’t say how Shenker stole the vehicle. Authorities confirmed only that a vehicle belonging to the City of Jacksonville was stolen. First Coast News footage of the scene showed the crashed vehicle to be a marked patrol car. According to the police report, about $10,000 worth of damage was done to the vehicle. Shenker was being held on $4,011 bail. (https://bit.ly/3cjY4PV)

Anonymous Donors Pay Off $95,000 Worth Of Medical Bills At Local Hospital
https://www.sunnyskyz.com/good-news/4121/Anonymous-Donors-Pay-Off-95-000-Worth-Of-Medical-Bills-At-Local-Hospital