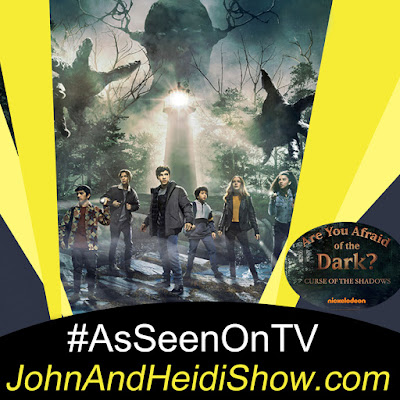 Today we visit with Jeff Wadlow and Bryce Gheisar about their new show “Are You Afraid of the Dark: Curse of the Shadows” premieres TODAY (Friday, February 12) at 8pm ET/PT on Nickelodeon.

No One Eats Alone Day

Researchers from the State University of New York’s College of Optometry conducted a study that finds reading outside can stimulate the brain and improve your eyesight. They say the discovery could lead to improvements in smartphone screens. Too much screen time has already been linked to a phenomenon dubbed “computer vision syndrome.” (https://bit.ly/3jevoJx)

A survey finds that 40 percent of kids like their sandwiches cut diagonal; 25 percent in the middle; 17 percent whole; and 6 percent in quarters.

A woman admitted that she was hiding narcotics in her vagina after the vehicle she was riding in was stopped by officers in eastern Ohio Tuesday night. The woman was arrested after the traffic stop in in Midvale, a Tuscarawas County village approximately ninety miles south of Cleveland. During the investigation, an officer was stabbed with a hypodermic syringe that was concealed on the woman, an arrest report from the Tuscarawas County Sheriff's Office said. The woman told officers the cause of the stabbing was from a piercing. The male driver was the subject of arrest warrants and had a suspended license. He admitted to deputies that a crack pipe was in the vehicle, and several drug items were found. The vehicle had been stopped for a right-of-way violation at 11:18 p.m. The woman was transported to Trinity Hospital Twin City in Dennison. Additional information about the incident was not available as of Wednesday morning. (https://bit.ly/3rndU0q)

John Boyega is heading to Netflix with The Formula, the streamer’s latest original movie. The Star Wars actor has signed up to play the lead in the project alongside Robert De Niro, who will also produce. The Formula “will follow a Formula One racing prodigy who’s forced to become a getaway driver to save the only family he has left.”

The upcoming movie “Shotgun Wedding” has officially cast Josh Duhamel to replace Armie Hammer after scandalous messages allegedly written by Hammer were leaked in which he seemingly endorsed cannibalism. https://fxn.ws/3j8y5wc

Denzel Washington isn’t above suffering for his career. In a recent interview, he revealed his top secret trick for embodying Joe Deacon in his new thriller The Little Things. Denzel said: “Gaining the weight, that’s a piece of cake. Literally a piece of cake. Eating big late. It’s not healthy, but it works. Milkshakes were my friend. Ice cream was my very good friend.”

Oregon’s law decriminalizing small amounts of all street drugs went into effect on Monday — a historic moment making it the first state in the nation to enact such a measure. Those found with personal-use amounts of drugs — including heroin, cocaine, methamphetamine, LSD, oxycodone and ecstasy — will now face a $100 fine instead of a criminal charge. (https://bit.ly/3j8uX3c)

Ever hear the term blind rage? It’s phrase for the phenomenon that occurs when otherwise rational people become completely irrational due to something that upsets them. For example, finding your husband with pictures of a much younger woman on his phone is the type of instance that might send one into a blind rage. A guy in Mexico took some old photographs of his wife from their younger days, scanned them, and then saved them to his phone so he would have them to look at any time. But his wife, not recognizing herself, thought it was a younger woman he was having an affair with and stabbed him multiple times. The husband was able to wrestle the knife away from her and explain that it was her in the pictures, but not before neighbors heard the fight and called the police.

A hacker has exposed the private details of 2.3 million people after breaking into into a major dating service. Sensitive information shared online last week belonged to MeetMindful and included users’ names, email addresses and location data. The data dump was posted to a publicly accessible hacking forum where crooks can download it for free. People’s real names, body details, dating preference, Facebook ID, birth dates and more were all leaked by the hacker.

Researchers say they can predict the success of a relationship based on the speaking style of a couple.

Police in Sweden arrested a man who allegedly pushed 19 mice through the mail slot of his ex-wife’s front door. The police said the ex-wife is musophobic — meaning she has a fear of mice.

The Indian government has hit out at pop star Rihanna after she tweeted about the months-long farmer protests on the outskirts of Delhi and other major cities. Thousands of farmers have been camped out around the Indian national capital for months now as they demand the repeal of agricultural reforms that they fear will leave them worse off. And now with Rihanna on their side. (https://bit.ly/3jkPfGP)

A woman in Arizona caught speeding told officers she didn't pull over for them because she "felt like it was the right thing to do," the Mesa Police Department said. In a release from the agency, officers say Hannah Clevenger was speeding, weaving in and out of traffic, and taking up two lanes at once with her car. One officer says after he got behind her car and turned on his car's lights, she looked at him through her driver's side mirror but didn't pull over. The officer then turned on his patrol car's siren along with his lights “to further grab Hannah's attention.” Still, Clevenger didn't pull over. Eventually, the cars reached a red light and the officer says he got out of his car to talk to Clevenger, who “stared at him without saying a word.” And, when the light turned green, she reportedly kept on driving. The next day, officers found and arrested Clevenger, charging her with unlawful flight from law enforcement. Officers say when she was arrested Clevenger told them she remembered the officer but didn't pull over for him “because I felt like it was the right thing to do.” (https://bit.ly/3je2F7B)

High Schoolers Create A Minecraft Replica Of Their School To Meet Up During Lockdown https://www.sunnyskyz.com/good-news