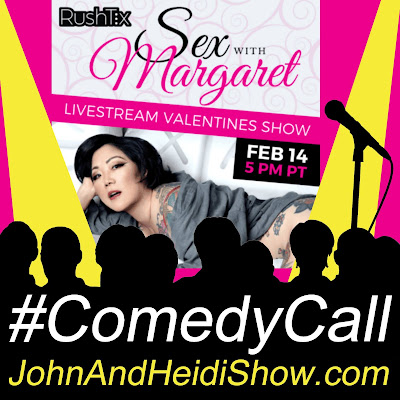 Today we visit with Margaret Cho about her VALENTINE'S DAY SPECIAL called SEX WITH MARGARET to RushTix. She'll give advice, anecdotes, and absolutely amazing anatomical descriptions of anything and everything.

All ticket holders can watch the show for 24 hours after the livestream broadcast.

If you find yourself struggling with a big decision that offers multiple options, researchers (Basel University) have a helpful suggestion: narrow your choices down to the two most promising options. According to their findings, that will help you make a decision as quickly as possible.

A survey found that Italy has the highest espresso consumption in the world. On the average, each Italian drinks about 600 shots of espresso a year.

Outdoor dining might be safer during the pandemic — but eating on New York City’s streets has its hazards. Hampton Sheet magazine publisher Joan Jedell was having dinner with a pal on Madison Avenue when “all of a sudden a drunk comes into the socially distanced cubbyhole and falls right on the table…All the food fell all over the place including the wine and everything.” Jedell said of the unknown boozer, “He seemed to be more of an Upper East Side drunk.” Luckily, “the restaurant just cleaned it all up and gave us a new table setting and we started all over again. Nothing shocks me anymore!” she added. (https://pge.sx/3oQlcYG)

In a new interview, Angelina Jolie shares what she's learned from quarantining with her kids. (https://bit.ly/3avDVDA)


THINGS NOT TO BUY FOR YOUR VALENTINE

• Roses, with a gift card for another woman

Names of some romantic-sounding places:

Kids ask funny questions! My kid (your kid/the neighbor kid) asked, “Is there a day without birthdays?” there’s not, of course, but google helped me (you) learn the day with most birthdays. https://www.rd.com/article/september-popular-birth-month/

There are 2 million farms in the U.S.

Prince Harry on Monday accepted an apology and damages from the publisher of British tabloid “The Mail” and its online version, “MailOnline,” in a libel lawsuit relating to articles about his relationship with the British armed forces. Harry sued Associated Newspapers for libel over two articles that claimed he snubbed the Royal Marines after stepping down as a senior royal.(https://cbsn.ws/39H7i6S)

An online petition has been started, asking that a steer that escaped Thursday in Rhode Island be sent to a sanctuary instead of a slaughterhouse, if found. The steer, which weighs about 1,500 pounds, has been on the loose since at least Thursday when it escaped a farmer who had brought the animal to a meat processing facility (in Johnston, Rhode Island). Victoria Ferruccio-Flores, who started the petition, said the steer has “earned the right to live out the rest of his days in peace, at a sanctuary.”

Police officers on patrol in Manchester, England, noticed an ambulance with its lights flashing pull in at a supermarket. But once parked, a family got out and went in to shop. Police pulled in to investigate and found the ambulance was bought used, and the driver was not only disqualified from driving, but had a warrant out for his arrest. He was jailed, and the ambulance impounded.