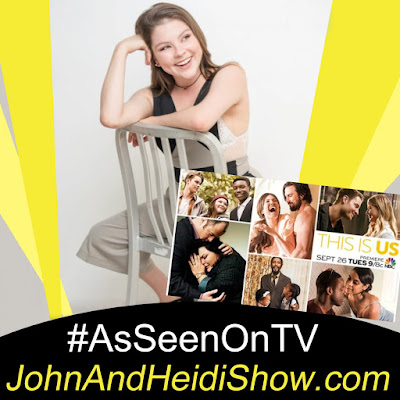 Today we visit with Hannah Zeile, she plays the role of 'teen Kate' in the critically acclaimed NBC series, This is Us. Season 5 premiered in September. THIS IS US airs Tuesdays 9/8CT on NBC. Hannah was also on the FX TV show Anger Management and she's a singer songwriter. She released her first singles in March of 2020.  https://twitter.com/hannahzeilexo

A new survey finds it takes 36 hints over the course of almost eight months for the average person to get their significant other to propose. The OnePoll survey of 2,000 engaged Americans revealed 54% said dropping hints to their partner encouraged them to propose. (https://bit.ly/3rIrOua)

A Portland man was arrested in Sandy on multiple charges including a DUI after letting his car roll into a deputy patrol car. A deputy said he first saw Jeffrey Cannon’s red Volkswagen Jetta rapidly approach him from behind just before 11:00 p.m. Saturday outside Sandy on Hwy 26. The Jetta had a sticker on the back bumper that read: “Not drunk, avoiding potholes.” The deputy pulled his patrol car to the right lane to see if Cannon would pass him. Cannon did in fact speed past the deputy and was clocked in between 80 and 90 miles per hour. The deputy pulled over Cannon who initially didn’t respond when the deputy called out to him. Instead, Cannon’s vehicle rolled backward about 25 feet — hitting the front of the deputy’s patrol car. The deputy said he could smell alcohol from the car and he noticed a can of Busch Light in the Jetta’s cupholder. Cannon eventually provided a breath sample in a field sobriety test, blowing a .22% blood alcohol concentration, more than twice the legal limit. He was arrested and transported to Clackamas County Jail, where he was booked. (https://bit.ly/3a7vuj7)

HBO has confirmed that the “Game of Thrones” prequel “House of the Dragon” is set to start filming in April. This is big news for fans of Fantasy. (https://www.dailymail.co.uk/tvshowbiz

Speaking with Khloé Kardashian on her daytime talk show, Kelly Clarkson talked about the hardships of co-parenting with estranged husband Brandon Blackstock. (https://fxn.ws/3d3DBPt)

A fourth movie in the Austin Powers franchise is reportedly in early development. No word if Mike Meyers will be back, but in a 2018 interview he said the prospect of a fourth movie was good.

The now viral celebrity Texas Attorney who got stuck in a cat filter mode during an online court hearing says he let his assistant’s young son play with his laptop. (https://fxn.ws/3aTiZH7)

Supermodel Bella Hadid has been posting multiple bikini pictures to her Instagram page over the past few days. (https://www.dailymail.co.uk

A rapper named Lil Uzi Vert has implanted a $26 million-dollar diamond into his face. (https://bit.ly/3rzYGFf)

When trying to avoid eating bad foods, trick your brain by saying you “don’t eat” what’s bad for you. A study in the Journal of Consumer Research found that people who were prompted to use the words “I don’t” versus “I can’t” were nearly twice as likely to resist the temptation of choosing unhealthy foods. The researchers believed using “I don’t” rather than “I can’t” gave people greater “psychological empowerment” by removing the need to make a decision.

Matthew Steeves and his wife haven’t had a moment alone in months, but when they stole away for a drive last week and stopped to play Pokémon GO, their brief getaway ended with a fine of hundreds of dollars. The couple, who live in the town of Kingsville, Ontario, had pulled into an empty church parking lot to capture some digital monsters. But a police cruiser drove up behind them and the officer asked what they were doing. After Steeves and his wife shared their impromptu game play the officer told them their trip wasn’t essential and handed the pair a fine for violating lockdown restrictions. With tax included, the fine is $880. Steeves said he plans to dispute the ticket.

Worldwide, there are 560,000 tons of chewing gum sold each year.

A woman in Spain came home to her apartment to find a burglar inside. The man ran off with some clothing and diet pills but left behind his own pants and jacket. Police are using them as part of their investigation.

An Arkansas man accused of leaving dead animals on a neighbor’s gravestone pleaded guilty. 79-year-old Joseph Alan Stroud of Pea Ridge agreed to a plea deal, which lowered his charge of defacing objects of public respect from a felony to a misdemeanor. Stroud was arrested on August 10th, 2020. He admitted damaging a burial monument by repeatedly placing dead animals on the gravestone of a former neighbor, Fred Allen McKinney, between May 31 and July 31 in the Pea Ridge Cemetery. After noticing various dead animals on the headstone, McKinney’s family was given permission by the cemetery to set up surveillance cameras. Stroud was arrested after the cameras caught him leaving a dead animal on top of the tombstone and walking back to a gray Dodge Journey. Stroud was wearing a teal-and-white woman’s jacket, sunglasses and a woman’s wig. McKinney’s family agreed to the plea deal as long as their relative’s headstone was replaced. (https://bit.ly/3tL4TjA)

A McDonald’s customer, apparently enraged about a fumbled order, walked behind the counter and ripped the mask off a worker’s face, new video shows. Deicy Calderon said the hangry exchange began when the worker forgot to put a breakfast burrito in the woman’s order at a location in Orange County, California. “Karen’s of Orange County, apparently this was over a breakfast burrito they forgot to put in,” Calderon wrote of the clip posted to TikTok. In the footage, the angry customer was heard demanding to know the cashier’s name. The cashier repeatedly insists that she “step back or I will call the cops” to which the woman responds by grabbing her mask. Orange Police Department said they responded to a report that a woman had torn off an employee’s mask. “Officers contacted the employee and conducted an area search for the customer. No further action was requested,” Sgt. Phil McMullin told the outlet.(https://bit.ly/3jBVQwM)

This City In Utah Is Accepting Food Donations To Pay Parking Tickets
https://www.sunnyskyz.com/good-news/