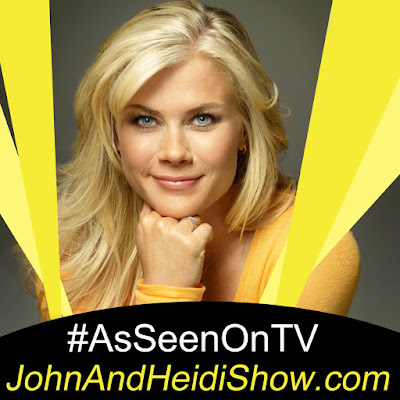 This weekend we visit with Alison Sweeney (Days of our Lives) about her fifth Hallmark movie from her Chronicle Mysteries franchise and her return as Sami Brady to Days for a guest-starring role. "Chronicle Mysteries: Helped to Death” Premiers Sunday February 21st 8/7CT on the Hallmark Movies and Mystery Channel. https://www.hallmarkmoviesandmysteries.com/chronicle-mysteries-helped-to-death/videos/preview-chronicle-mysteries-helped-to-death

A new study reveals alcohol abuse has risen during the pandemic. (https://bit.ly/3pZW3w5)

A study conducted by researchers at the University of Sydney in Australia is the first to prove that not only do insects feel pain from an injury, but they suffer from chronic pain after recovering from one. (https://bit.ly/3cYhqdH)

After her fake ID was seized at a bar, an 18-year-old Oklahoman called police for help in getting the illegal item returned, according to cops who instead arrested her. Investigators say that Blakelee Sands sought admittance Tuesday evening to a bar in Edmond. But she was turned away by a bouncer who confiscated her phony Texas ID, which carried the name “McKamie Queen.” When her demands for the ID’s return were rejected by bar personnel, Sands made the mistake of dialing police. Cops responding to the 9-1-1 call were met by Sands, who recounted the seizure of her ID and the bar’s refusal to return it. The teenager insisted that the ID was authentic and that she was, in fact, “McKamie Queen.” However, when officers ran a computer check on the license number on the “Queen” ID, it came back to a male Texas motorist. When confronted about the discrepancy, Sands reportedly said that she thought her fake ID ruse would not be detected by police. That miscalculation resulted in her arrest on a felony charge of presenting a fake ID with the intention of misleading a peace officer. (https://bit.ly/3tvoiVL)

How do you bring a 78-year-old Harrison Ford back for a fifth Indiana Jones movie? Include the Fountain of Youth in the plot and use computers to de-age your leading man. A source says Indiana Jones 5 will begin with the title hero retired and living a life of domestic bliss with Marion Ravenwood before he gets dragged into the race to discover the Fountain of Youth after learning that several vials of water said to be from the fabled monument are real. The rumored plot leak reveals that Indy will drink some of the water himself, making him the third and final member of the original Star Wars trio to be de-aged in a Lucasfilm project after Mark Hamill and Carrie Fisher got the same treatment in The Rise of Skywalker.

Shark attacks were down in 2020. Maybe because much of the world was on lockdown? Live Science says there were 78 shark attacks in 2020, 12 of them fatal. Thirty-six of the attacks — three of them fatal — were reported in the United States, more than in any other country. Florida has the most recorded shark attacks in 2020 with 23. There were 101 shark attacks around the world in 2019. During an average person’s lifetime, their odds of being killed in a shark attack are about 1 in 3.75 million, compared with, say, dying from in a car accident, where the odds are 1 in 84.

A mechanic on TikTok has seen his three day old video go viral — and for a scary reason. @kaos_noe‘s video shows how a woman allegedly had a secret tracker installed on her car by an ex-boyfriend. In his video the mechanic says, “So a customer is scared there’s a tracker in her vehicle from a crazy ex-boyfriend.” He then shows himself under the vehicle looking at the car’s underside, where he discovers a small device near the wheel. There have been no updates on the post and it’s unclear if the incident was reported or if any action was taken against anyone involved in the alleged incident.

A wallet found inside the wall of a cottage being renovated in Georgia was returned to the family of its owner 66 years after it was apparently lost. Mary Kay Andrews, a New York Times bestselling author, said crews renovating her cottage on Tybee Island looked inside a wall earlier this month and discovered a wallet that appeared to have been there for decades. The documents inside the billfold identified its owner as Melba Lanier, who lived in the home with her husband, Jack, when they were newlyweds in 1954. Andrews’ Facebook post about the discovery reached Jack and Melba’s children, Sheryl and Kevin Lanier. The siblings said the wallet will be kept as a family heirloom.

Scientists from Madagascar and Germany say a newly discovered species of chameleon is a contender for the title of world’s smallest reptile. The new species, named Brookesia nana, has a body of just 13.5-millimeters — a little more than a 1/2-inch. That’s at least 1.5 millimeters smaller than the previous record holder, another member of the Brookesia family. The tiny male and a slightly larger female were spotted on a mountainside during an expedition. Confirming Brookesia nana as the smallest reptile species will require finding more of them, which might take several years.

Conservationists are calling on the public to stop milking toads, as it is threatening the survival of the species. The Sonoran Desert toad, also known as Bufo alvarius, possesses a potent psychedelic compound, called 5-MeO-DMT, which can be used for hallucinogenic purposes. In order to get your hands on the white slime, you must tickle the animal’s glands until this is secreted. “Licking toads will not give you warts or produce a fairy prince, but it might get you high,” wrote one author in the LA Times. Orally ingesting toad secretions has been referred to in popular culture and in scientific literature as 'toad licking' in the past, drawing much media attention. But while the licking has become more of an urban myth nowadays, researchers are concerned that the process of overmilking could result in a danger to the species’ survival.(https://bit.ly/3aUBZ7V)

A 74-year-old Arizona woman was arrested for allegedly whacking her sleeping boyfriend in the head with a hammer for leaving the television on. Marilyn Ann Kepler is accused of assaulting her partner, also 74, at their home in Bullhead City. The man awoke to the beating — and then convinced Kepler to drive him to the hospital on Monday afternoon, the Bullhead City Police Department said. As they approached a local hospital, Kepler allegedly pulled a gun on the man, who said he was able to wrestle it away. He then fled the vehicle and got medical help at the hospital, where he told workers about the ordeal. The hospital alerted police, who arrested Kepler at her house. She was later charged with aggravated assault. She told police she was mad at her boyfriend for leaving the TV on, which kept her awake. (https://bit.ly/3a7yBaD)

A Business Owner Met The Man Who Stole From Him -- And Then Hired Him
https://www.sunnyskyz.com/good-news/