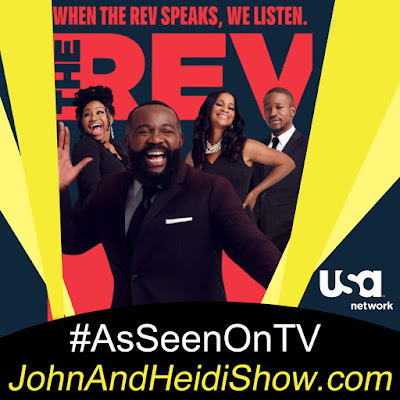 Today we visit with Richard “The Rev” Hartley, the outspoken and eccentric founder, pastor and choir master of Haven International Ministries in Queens, NY. After traveling the world for years to coach choirs, he is happy to be back home with his family and ready to make his congregation’s choir world class.

He and his family are featured in USA’s new family docu-comedy THE REV Thursdays on USA Network https://www.usanetwork.com/the-rev

A new study conducted by Johns Hopkins University School of Medicine finds that cocaine use increases the risk of dying from coronary artery disease. (https://bit.ly/2NfPAyP)

A new study shows remote learning students are more stressed than their peers in the classroom. (https://nbcnews.to/3sfstUf)

Two men in Pennsylvania have been cited for hunting under the influence of a controlled substance after they got caught stalking squirrels while under the influence of marijuana. On January 27th, Warden Harold L. Cole Jr. of the Pennsylvania Game Commission Northcentral Region filed charges alleging that Douglas W. Litz and Bryan T. Poust smoked cannabis before going hunting in the fall. The Williamsport men admitted to smoking before hunting on September 17th, when they were stopped by Warden Geril Schoonmaker in State Game Lands 252. While patrolling the area around 10:30 in the morning, Schoonmaker spotted a minivan parked on Ridge Road and observed the smell of weed wafting from it, per the complaint. A glass pipe, neon orange clothing, and shotgun shells were also visible in the vehicle registered to Poust. 32-year-old Litz and 34-year-old Poust have both been charged with one ungraded misdemeanor count of hunt/fur take under influence of a controlled substance, use/possession of drug paraphernalia, and two summary counts of commission regulations violated. (https://fxn.ws/3oW2i2D)

Director Karam Gill calls Tekashi 6ix9ine a “horrible human being” ahead of the debut of his documentary on the hip-hop artist. The director called Tekashi someone with no talent or morals, “hyper calculated,” and a “social media mastermind” who can spark a reaction. (https://www.dailymail.co.uk/tvshowbiz

Lori Loughlin has officially got her passport back after completing a prison sentence for her role in the college admissions scandal. (https://bit.ly/3ucf29p)

According to US Weekly, Kourtney Kardashian and Travis Barker's relationship has the full support of their loved ones. The magazine's source added that the pair has “so much in common” with each other. (https://fxn.ws/3aweDGP)

Nestle is making a new Vegan KitKat Bar that will be 100% animal free. (https://bit.ly/3dlhDaK)

Three Cuban nationals who were rescued this week after being marooned for 33 days on an uninhabited Bahamian island said they managed to survive on a diet of coconuts, conches, and rats. (https://fxn.ws/3abQZ2a)

A Koala in Southern Australia caused a five-car pile-up on a six-lane freeway. (https://bit.ly/3aY4RfA)

A United Airlines flight from Denver to Honolulu lost an engine during takeoff, causing parts of the Boeing 777 to fall on nearby houses before returning to Denver Airport to make an emergency landing. Luckily nobody was hurt in the incident, which dropped pieces of the plane over a one-mile radius. (https://bit.ly/3dznBVJ)

According to a study, romantic comedies make women more likely to believe that being stalked is normal.

China has announced plans to create a rival boyband to BTS.(https://bit.ly/2MyCmNq)

A British man faces up to six years in prison for breaking Singapore’s quarantine rules to meet up with his then-fiancée in the same hotel. 52-year-old Nigel Skea left his room at the five-star Ritz-Carlton hotel on three occasions to meet his now-wife, 39-year-old Agatha Maghesh Eyamala in another room. On one of the occasions, a mask-less Skea climbed an emergency stairwell to enter a room that Eyamala had booked at the hotel in downtown Marina Bay. He then spent nine hours with Eyamala, who was not under quarantine. Most travelers are required to stay in an assigned hotel room or at home to quarantine for 14 days after arriving to Singapore. Skea pleaded guilty Monday to breaking the country’s coronavirus quarantine, while Eyamala pleaded guilty to aiding her partner in the hotel rendezvous. The couple will be sentenced February 26th in court, where they each face up to six years in jail and a fine of 10,000 Singapore dollars ($7,558). (https://bit.ly/3u3pijT)

On Monday, February 15th at approximately 7:22 a.m., Atmore Police Department officers responded to Chevron Gas Station regarding a stolen vehicle. According to police reports, officers determined that a gray Chevrolet Tahoe had been stolen while stationary at the gas pump. Witnesses said a female, later identified as 22-year-old Hayli Dawn Lape of Columbus, Ohio jumped into the vehicle and sped away, damaging the gas pump as she did so. Alabama State Troopers and APD officers pursued the vehicle as Lape drove onto I-65 southbound and exited, where she crashed the vehicle. Police said Lape attempted to elude officers on foot but was apprehended a short time later and placed under arrest. She suffered minor injuries in the crash and was taken to North Baldwin Infirmary in Bay Minette, where she was treated and released. The Ohio woman was taken to the Escambia County Detention Center without incident. She remained behind bars late Tuesday afternoon, awaiting a bond hearing on charges of first-degree theft of property and fleeing or attempting to elude law enforcement. (https://bit.ly/2ZpmxLJ)