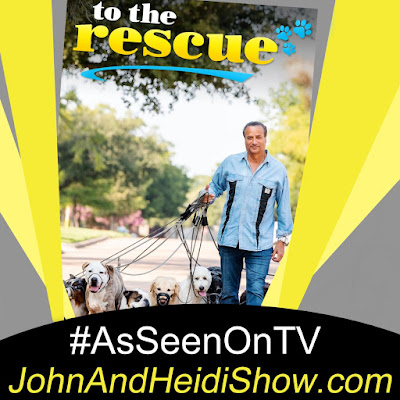 Today we visit with Tommy Habeeb host of Cheaters and Stag now has a NEW SHOW called To The Rescue where they help rescue dogs, give them make-overs and help find them a new forever home! https://totherescuetv.com/

National Shower with a Friend Day

A survey shows employees that get free snacks on the job are happier overall. One thing the survey found that most companies get right is the coffee. Only 18 percent, however, go further and provide daily free snacks.

Portland police arrested two people they say attacked a man because his car had Vermont license plates. The suspects yelled at the victim and told him that he shouldn’t be in Maine, then assaulted him on Friday afternoon, police said in a Facebook post. Police said they damaged his car and tried to pull him out of the vehicle. The victim, whose name was not made public, was not seriously hurt. Police responding to calls from witnesses found that the suspects had fled by the time they arrived, but both were arrested a short time later. 41-year-old Nathaniel Glavin and 22-year-old Vanessa Lazaro both face assault and drug charges. Lazaro was taken to the hospital and Glavin was held on $10,000 bail. It was not clear if they had attorneys. (https://bit.ly/3plw8P8)

Katherine Heigl and her husband Josh Kelly have put their Rocky Mountain Ranch in Utah on sale for $4 million dollars.www.dailymail.co.uk

Eve Mendes was seen wearing a ring on a hike with Ryan Gosling in California, sparking rumors that the couple has gotten engaged. (https://pge.sx/36nvqt9)

In a new interview, Bill Gates says he's surprised people think he wants to use the Coronavirus Vaccines to put microchips in Americans. (https://bit.ly/36wwmeJ)

A Chick-Fil-A manager in South Carolina saved the day when he stepped in to organize his town's coronavirus vaccine drive-thru. (https://abc11.tv/3cughtQ)

This Sunday the Tampa Bay Buccaneers will clash with the Kansas City Chiefs at Super Bowl 55 in Tampa. The Super Bowl is often the biggest live TV event of the year (in terms of viewership), though this year's exhibition (like most things over the last 12 months) will look a bit different. For starters, many of the usual advertising powerhouses including Budweiser, Pepsi, Ford and Coca-Cola chose to forgo ads for their products this year in favor of promoting coronavirus vaccination initiatives. Still, others brands like Bud Light and Tide have chosen to pay the five million dollars per 30-second spot and have already debuted their spots on social media. Through all the challenges of the past and current year, people are craving content that offers an escape from reality. This year's Super Bowl could be one of the most watched ever as people seek comfort in a familiar, communal experience. https://www.cnet.com/news/

For the first time since 1983, Anheuser-Busch won’t be airing ads Budweiser during the Super Bowl. The company announced it is instead donating the money it would have spent on commercials to coronavirus vaccination awareness efforts. Although you’ll still see four minutes of ads during the game for its other brands like Bud Light, Michelob Ultra and its new seltzers — the Budweiser Clydesdales will not be seen.

A husband and wife in Brazil are seeing a marriage counselor because she spends too much time on TikTok. According to the husband the wife is so obsessed with creating and watching TikToks she’s taken leave from her job and asked her mother-in-law to watch their children for a few weeks until her TikTok career takes off.

An Idaho woman went on a bizarre rant at a local city council meeting saying she had to wear a “freaking burka” so she could avoid wearing face masks while attending college classes on campus. A woman who identified herself as Katie Dugger voiced her frustration about the mask mandate and shared why masks had been a burden in her life during a city council meeting in Lewiston, Idaho on Monday. Dugger, wearing a colorful outfit with a headscarf over her head complained that she took off a semester from school because she didn’t want to wear a mask. “I took last semester off at LCSC (Lewis-Clark State College) because of all this nonsense because I cannot wear a mask,” she said. “It doesn’t matter why but it is very traumatizing for me to put on a mask, because of something that happened to me when I was a kid.” Dugger went on to explain why she chose to wear her eccentric outfit instead of wearing a mask. She also downplayed the vaccine during the rant. (https://bit.ly/3orL7pl)

A 33-year-old man is facing reckless driving charges after a video posted to social media purportedly shows him driving upwards of 200-mph on I-465 in Indianapolis. Indiana State Police began their investigation into Gabriel Sleiman after a video uploaded to YouTube on November 18th allegedly shows a black Lamborghini stopped in the left lane of I-465, near the nine-mile marker. Police said the video then shows the Lamborghini rapidly accelerate, with the speedometer reaching a speed of 213-mph before the vehicle slows down. A follow-up investigation by Indiana State Police Crash Reconstructionists was able to estimate the Lamborghini passed another vehicle at a speed of 198-mph. Investigators identified Sleiman as the driver of the vehicle after reviewing old social media posts in which Sleiman talks about street racing and purchasing his Lamborghini. State court records show Sleiman has been issued, then paid, for fifteen traffic citations related to speeding in the state, dating back to 2006. (https://bit.ly/39oIGj2)