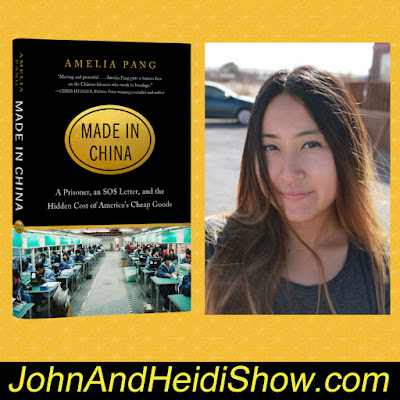 This weekend we visit with award-winning journalist Amelia Pang, author of MADE IN CHINA: A Prisoner, an SOS Letter, and the Hidden Cost of America’s Cheap Goods. An amazing true story of a handwritten note, found in a box of Halloween decorations purchased from an Oregon Kmart, read: “If you occasionally buy this product, please kindly resend this letter to the World Human Rights Organization. Thousands people here who are under the persecution of the Chinese Communist Party Government will thank and remember you.” Written and smuggled out by Sun Yi, a political prisoner forced into grueling, unpaid labor in an extralegal detention center, this plea for help would lead award-winning journalist Amelia Pang in pursuit of its origins. AVAILABLE NOW - https://amzn.to/3pQCztH

National Send a Card to a Friend Day

Your sweetheart or your pet. Who would you choose to dump if one had to go? Most current pet owners said they would hold on to their spouse or significant other (84 percent), but a sizable 14 percent picked their pets. And while both men and women were equally likely to go with their spouse or significant other, women are far more likely than men to say the human-pet choice would be a tough one (40 percent among women compared with 26 percent among men).

In Thailand, police auctioned off a Honda CRV that had been seized in a drug bust. The buyer spent $19,000... on the vehicle. Later, a mechanic discovered a secret compartment behind the bumper that contained nearly 100,000 amphetamine pills. Officials said they would conduct more thorough searches in future.

Disney’s Jungle Cruise ride is getting an upgrade. The boat-themed ride is located in Adventureland at four Disney theme parks worldwide and Monday it was announced that the attractions in Disneyland park at Disneyland Resort and Magic Kingdom Park at Walt Disney World Resort will be receiving upgrades that will “stay true to the experience we know and love — more humor, wildlife and skipper heart — and also reflect and value the diversity of the world around us.” It’s also all but certain that these upgrades will include elements that tie into the upcoming Jungle Cruise movie.

A source says a live-action Harry Potter TV series is in the works for HBO Max.

GameStop investors mocked Wall Street with a series of digital billboards across the country that saluted their big stock gains. www.dailymail.co.uk/

Rod Stewart reached a plea deal that will let him avoid jail time after punching a security guard at a Palm Beach Hotel. (https://bit.ly/39xnt6z)

OJ Simpson was roasted online after tweeting a picture of himself getting the coronavirus vaccine. (https://bit.ly/2L5gpEV)

An autopsy revealed that Elvis Presley was constipated for FOUR MONTHS leading up to his death on the bowl at Graceland. (https://bit.ly/3oAZ2ta)

Police in Michigan rescued a red-tailed hawk that was stuck. Officers (in Farmington) responded Saturday to a report of a hawk struck by a vehicle, and they arrived to find the bird of prey trapped in the vehicle’s grill. On Facebook the police department said: “Officers meticulously extricated the hawk by removing parts of the front of the car without causing injury to the animal or causing more damage to the car.” Officers said the hawk received “outstanding care” at an animal emergency center and is expected to be released back into the wild any day now.

Amazon is launching a new subscription service for Echo users called Alexa Guard Plus, which will include access to a 24-hour helpline, alerts when your smart speakers or displays hear a break-in, deterrence measures and more. One of the deterrence measures is the sound of dogs barking if a break-in is detected. Guard Plus will cost $5 per month or $49 per year.

The male praying mantis cannot copulate while its head is attached to its body. The female initiates sex by ripping the male's head off.

Police say a man was arrested after he allegedly threatened a person with a hatchet after his girlfriend cut in front of a car in an In-N-Out drive-thru. According to a probable cause statement, a man was sitting at In-N-Out drive thru when a woman driving a silver BMW cut in front of him. The man then flashed his headlights to get the woman’s attention, but she ignored him. Shortly after, another man got out of a truck parked nearby and broke the window of the victim’s car and threatened him with a hatchet. After breaking the window, the suspect, identified as Damien Lee Hallett, pointed at the victim with his hand bleeding and told the victim “it will be your blood next”, and left the area. A witness of the crime was able to provide police with the license plate of the truck and were able to locate the unoccupied truck parked nearby. Officers located a bloody hatchet inside the truck and also observed blood on the outside of the driver’s door. Hallet has been charged with two counts of assault, and one count of criminal mischief. (https://bit.ly/3anLsVd)

A Los Angeles city councilman botched a recital of the Pledge of Allegiance during a virtual meeting. Councilman Kevin de León, a Democrat representing the city’s 14th District, said it “would be an honor” to recite the pledge during the council’s Tuesday Zoom meeting. But his ensuing performance didn’t go as expected. “I pledge allegiance to the flag of the United States of America,” the councilman began before suddenly stopping, according to a 43-second clip posted on Twitter. Seconds later, de León started again, but only managed to blurt out the sort-of-word “undervisible” and then continued from the start, again saying: “I pledge allegiance to the flag of the United States of America.” De Leon, whose face couldn’t be seen in the video, was then heard sighing “oh boy” along with the sound of furious typing on a keyboard. He then continued, saying: “For which it stands, one nation, under God, indivisible, with liberty and justice for all.” De León then apparently said “oof” at the end of his bungled performance, which got him skewered online. (https://bit.ly/3rcNXR9)