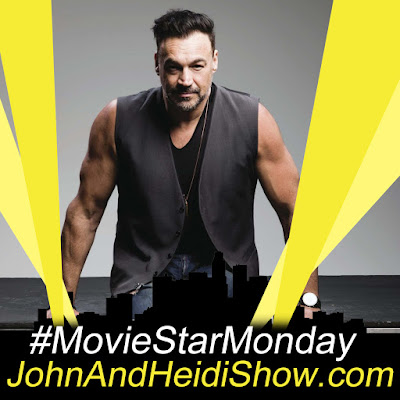 It's a #MovieStarMonday with Aleks Paunovic from TV shows Van Helsing, Battlestar Galactica, iZombie, Supernatural and from MOVIES War for the Planet of the Apes, Siberia and more. He's now in Snowpiercer on TNT season TWO now on Monday nights! https://www.tntdrama.com/snowpiercer

National Clean Out Your Computer Day

A new study conducted by Ohio State University finds Tattoo Artists are vulnerable to chronic injury because they spend long hours practicing their craft in body-crippling positions without ergonomic seating support or other safeguards. (https://bit.ly/2YB0HV7)

A study by the Medical College of Wisconsin found that people who lose a lot of weight may end up looking older because of a condition known as “diet face” that makes your bones more pronounced. https://bit.ly/3pz8sH2

A man accused of destroying a toilet at The Coconut Bar was given a notice to appear in court in connection with the alleged commode carnage. The case of the purported potty pulverizer began around 1:49 a.m. January 19th as a Martin County sheriff’s deputy went to the bar. Emergency officials were called “because a customer was breaking the toilet.” The customer later was identified as a 25-year-old New Port Richey man, whose occupation is listed as “plumbing.” He’d been playing in a billiards tournament, but got cut off from alcohol, the bartender told investigators. After being cut off, he left The Coconut, but returned during “last call” and tried to buy a beer. The man was asked to leave, but refused. He said he wanted to use the restroom first. An unidentified person followed him “to the restroom to ensure he uses it and leaves immediately.” The man was accused of getting upset and removing the toilet lid and beating the toilet with it. A police report states that “The toilet was destroyed and the man ran out.” Deputies said he eventually fessed up to busting the toilet. He was issued a notice to appear in court on a criminal mischief charge. (https://bit.ly/36fvR8I)

Showbiz insiders claim the filming of “Mission Impossible” has become a nightmare because Tom Cruise is obsessed with social distancing guidelines and continues to berate the crew. (https://pge.sx/36KHNjp)

The Hollywood Reporter revealed that Mathew Perry once wrote Julia Roberts a paper on quantum physics to get her to appear on “Friends.” (https://pge.sx/3r31bQ0)

Some guy wrote on Reddit: “My girlfriend doesn’t believe that the astronauts in the International Space Station are there. That it’s fake, That they’re liars. While she believes that the space station is there, she will not accept that there are people actually on-board.”

The Dodger Stadium COVID-19 vaccination site was temporarily shut down on Saturday by a group of protesters who gathered at the entrance. (https://yhoo.it/39vMRtv)

An Oklahoma State Representative who wants to designate an annual hunting season for BIGFOOT is being attacked online by Sasquatch Enthusiasts. (https://bit.ly/3rcyy3d)

Coca-Cola is adding an extra kick to its classic sodas with a line of coffee-infused drinks that are hitting American shelves this week. First tested in international markets in 2018, Coke with Coffee is a cross between the company’s signature beverage and Brazilian coffee that comes in three flavors: dark blend, caramel and vanilla. There’s also a sugar-free option. With about twice as much caffeine as a can of coke (69 mg per 12 ounces), the product is geared toward consumers in need of a daytime jolt to ward off an afternoon slump.

Banging your head against a wall uses 150 calories a hour

It’s long been believed that children who learn a musical instrument generally perform better in school. A new study may provide an explanation for this musical connection. Researchers from the University of Zurich say musicians have super connected brains compared to people who don’t play instruments. Their findings reveal those who begin practicing an instrument at a younger age have stronger connections than those who pick up an instrument later in life. The discovery shows just one of the ways in which people’s experiences can shape their brain.

A City of Cincinnati salt truck led police on a slow-speed chase, dumping its load on police cruisers in pursuit. According to an affidavit, a Reading police officer initially made a traffic stop on a different vehicle. Officers said they were out of their vehicles and taking a person into custody when they heard the sound of an engine accelerating and saw a City of Cincinnati salt truck barreling toward them. The truck had its salt spreader on, flinging salt onto the officers and the man being taken into custody. Officers then chased that salt truck, activating their overhead lights and ordering the truck to pull over. The truck failed to stop, made a U-turn, and continued to flee from police. At one point, officers say the salt truck driver raised the bed of his truck, dumping salt on police cruisers in pursuit. Eventually, police said the pursuit – which lasted around thirty minutes – ended. Authorities have identified the salt truck driver as 36-year-old Omar Armstrong, 36. Armstrong faces a series of charges including reckless operation of a motor vehicle and failure to comply with officers. (https://bit.ly/39A4ecU)

Texas officials were left red-faced when the Texas Department of Safety accidentally sent out an Amber Alert claiming that “Child’s Play” puppet Chucky had abducted his son, Glen Ray (featured in “Seed of Chucky”) and was on the run while wielding a huge kitchen knife. According to the Alert, captured by TMZ, “the abducted Glen, 5, weighing 5 pounds and standing at 2-foot-3, was last seen in Henderson, Texas, and the suspect, Chucky, 28, was in his classic blue denim overalls and striped shirt.” “This alert is a result of a test malfunction,” the Texas DPS told TMZ. “We apologize for the confusion this may have caused and are diligently working to ensure this does not happen again.” (https://bit.ly/2L52QFv)


GOLF COURSE OR REHAB: Brought to you by TimeForRehab.com
I read the name of a REAL business located somewhere in the world... Heidi has to guess if it's a Golf Course or a Rehab Center.

Flowers brighten isolation for many during pandemic
timesherald.com/business/flowers