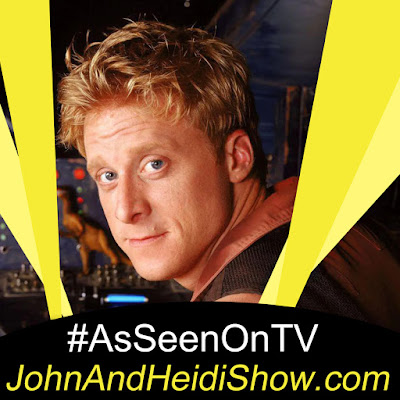 Today we visit with Alan Tudyk. (Tucker And Dale vs Evil, Firefly, 28 Days, Serenity, Abraham Lincoln Vampire Hunter, Transformers 3) He stars in the new Syfy dramedy series Resident Alien based on the Dark Horse comic. Alan plays Harry, an alien that crash lands on Earth and passes himself off as a small-town human doctor. Arriving with a secret mission to kill all humans. https://www.youtube.com/watch?v=T4J7QjGNTs4

A One Poll survey found that half of Americans do not have a last will and testament. (https://bit.ly/2Yn2soM)

According to a survey, most Americans think the first sign of a heart attack is what they see on TV and in the movies — the person grabs his or her chest before keeling over.

A man is facing charges after he led officers on a chase while driving under the influence. Altoona police say 36-year-old Terry Fornari Jr. was drunk and driving on a DUI suspended license when he led officers on a chase after driving away from a traffic stop at about 9:30 a.m. Fornari is accused of running twelve stop signs and one red light before he pulled into a driveway and stopped, according to charges filed by Altoona police. An officer tackled Fornari as he ran through a yard. Police said Fornari had a can of beer in the front pocket of his coat and there was a case of beer on the passenger seat of the car. Police pointed out Fornari has four previous DUI convictions. Fornari is now charged with felony and misdemeanor DUI, felony fleeing police and misdemeanor counts of recklessly endangering another person. He posted 10% of $15,000 bail and is scheduled to appear at Central Court for a preliminary hearing on February 3rd. (https://bit.ly/3qNOrNc)

Pamela Anderson announced that she’s quitting social media and urged her followers to find their purpose in life and not be seduced by wasted time. https://bit.ly/39otX7X

Arnold Schwarzenegger was seen riding his bike through Santa Monica one week after receiving the COVID-19 Vaccine. https://www.dailymail.co.uk

Not sure what to get your sweetheart for Valentine’s Day? Instead of flowers, how about a lovely arrangement of pickles? Boston-based Grillo’s Pickles is bringing back its famous pickle bouquet. It’s a do-it-yourself kit that comes with instructions for how to put the bouquet together. The kit includes an empty 32-ounce pickle container, 15 wooden skewers, artificial floral filler and cellophane, plus a coupon for a free jar of pickles (sold at Target and Whole Foods). It’s being sold online for $20. https://www.grillospickles.com/

Their hands might be gifted… their feet fast… their strategies on the field absolutely cunning… but a quarter of Americans don’t really think it matters. They believe that God personally controls who wins the Super Bowl.

Some people want to move the Super Bowl to Saturday.

The biggest challenge for people watching the Super Bowl won’t be betting on the winning team but hearing the commercials over the sound of crunching. According to a survey, these are the top activities people (guys specifically) will be doing during the Super Bowl:

There are 5,194 paved runways in the United States.

A 20-year-old man accused of stealing property from hotel guests took pairs of women’s underwear and left a note with his phone number. Police responded to a burglary at the Riverside Hotel Casino that had occurred Saturday, January 16th. Officers learned a housekeeper, later identified as Trevor Savok, stole property and clothing items from guests. A group of girls staying at the property told police they had returned to their hotel room after a soccer tournament to find a note that said, “Text me if you want your panties back.” The arrest report said that the note also had a phone number on it and a hand-drawn heart. Police added that a set of AirPods was also missing. Savok had been assigned to service the room and the number left on the note was the phone number listed in his employee records. When police contacted Savok, he admitted to taking the wireless earbuds, but not the underwear. He faces multiple charges including burglary and extortion. (https://bit.ly/2Moqop2)

A woman reported bomb threats at the St. Peters school she worked at so she can be sent home from work early and still get paid. Officials with the St. Peters Police Department said the department responded to Primrose School for a bomb threat on January 12th at 7:00 a.m. and again on January 22nd at 8:00 a.m. In both threat calls, the school was immediately evacuated and the police department didn't find any bomb devices anywhere. Their investigation showed Janet Porzelt, an employee of the school, and her boyfriend, Evan Hausermann, were the ones who made the threat calls. Police said the threats were made in order for Porzelt to “be sent home from work, but still receive her pay for the full day.” The Florissant couple were charged for making a terrorist threat and making a false bomb report. They are being held at St. Charles County Jail on a $25,000 bond. (https://bit.ly/39ZBGbH)

The Brazos in Waco, Texas ….. REHAB

NYC Cleaning Woman Is Gifted A Penthouse By Residents
https://www.sunnyskyz.com/