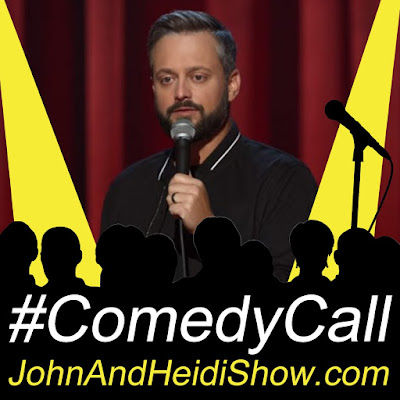 Today we have a #ComedyCall with very funny comedian Nate Bargatze. We'll talk about his highly anticipated 2nd Netflix special, The Greatest Average American which came out on March 18th. This follows the success of his first Netflix special, The Tennessee Kid (2019), which premiered to rave reviews and sold-out venues across the country. https://www.youtube.com/watch?v=VPJcztktXSw

A Florida man is accused of sitting naked in a chair outside an apartment complex, authorities said. Irving Edward Howard, 71, of Fort Myers, also known as “Babycakes,” was arrested by the Fort Myers Police Department on Thursday. He was charged with four counts of lewd and lascivious behavior, one count of indecent exposure and one count of disorderly intoxication, according to Lee County online booking records. This is not the first time Howard has been arrested. According to a 2019 investigation by WBBH, taxpayers had spent $300,000 for Howard to spend more than 6,000 nights in jail. From April 2019 through August 2019, Howard spent 134 nights in jail, WBBH reported. According to Lee County booking records, Howard has been arrested 12 times since August 2019, including two times for indecent exposure and three times for trespassing. Howard’s record of arrests in Lee County stretch back to 1988, according to booking records. Howard remains in the Lee County Jail, according to booking records. He is scheduled to appear in court on April 12. (http://bit.ly/2OPA79o)

Beyonce's daughter has won a Grammy for appearing in her mother's music video. (https://bit.ly/3vs0Idu)

Alex Rodriguez is denying reports that he and Jennifer Lopez broke up on Friday. The couple shares a $35 million dollar Miami mansion. (http://fxn.ws/3ldpHfR)

Kourtney Kardashian has revealed she froze her eggs in case she wanted to have another baby. (https://www.dailymail.co.uk/tvshowbiz/article-9348039/Kourtney-Kardashian-41-reveals-froze-eggs-age-39-case-wants-kids.html)

An ESPN Broadcaster in Colombia is okay after an entire wall came crashing down on him during the soccer show “ESPNFC Radio.” (https://fxn.ws/3v9jPsB)

April 15 is not the most dreaded day of the year. That’s according to a survey of 1,000 people, which finds more people — 33 percent — dread visiting the dentist or doctor more than tax day. Only 15 percent said they hated April 15. Once again the IRS has pushed back the filing deadline. In 2021 it will be May 17.

When your mind draws a blank it probably means you’re under stress, according to a study of why we forget. Seems that stress plays an important role in how well our powers of observation and recall interact. Stressful situations like exams, courtroom testimony and job interviews can all affect our memory.

It really is one of the great debates: What is the right way to hang a toilet paper roll? Research shows you use less paper when you drape the end over the top of the roll, simply because it’s easier to see. You also don’t have to reach as far to grab the paper. Also, it’s more sanitary to pull from the front since you’re not touching the wall and leaving germs as you would when pulling from the back. And finally — and this is the biggie — hotels can’t be wrong.

Fingernails don't grow after you die. Despite what you may have seen on other lists of random trivia, your fingernails and hair do not, in fact, continue to grow after you die. To grow, these must have a steady supply of glucose, which is cut off after the heart stops beating, preventing any further growth. In fact, the skin around the hair follicles and nails dehydrates after death and partly retracts, which can make them appear longer.

Climate protesters blocked traffic in South Australia after supergluing themselves to the road. (https://yhoo.it/3bEQy0U)

German police say they have solved a nine-year-old burglary after DNA found on a half-eaten piece of sausage matched that of a man detained in France over an unrelated crime. Police in the western town of Schwelm said Thursday that the sausage belonged to the victim, and the suspect — a 30-year-old Albanian citizen — appeared to have helped himself to a bite during the March 2012 break-in. (http://bit.ly/3thGTU7)

An accused murderer was mistakenly released from Rikers Island this week because of a clerical error. 26-year-old Christopher Buggs was awaiting trial in a 2018 Brooklyn murder when he was released on an unrelated criminal contempt case — for which the judge sentenced him to time served. The city’s Department of Correction confirmed that an inmate was prematurely released for the Otis Bantum Correctional Center on Monday. “We are aware of this incident and a full investigation into how this happened is underway,” the department’s Deputy Commissioner of Public Information Peter Thorne said in a statement. “Right now we are working with our law enforcement partners to return this‎ individual to custody.” Cops say that Buggs is about 5-foot-5 and 160 pounds. He is shown in a photo released by police with a scar on his cheek and a dollar-sign tattoo on his neck. He was arrested on February 3rd, 2018, in connection to the slaying of Ernest Brownlee, 55. (https://bit.ly/3t5m2mN)

100-Year-Old Who Beat COVID-19 Sees Family For The First Time In A Year
https://www.sunnyskyz.com/good-news