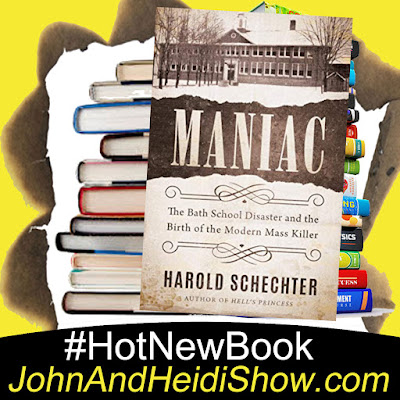 Harold Schechter, Amazon Charts bestselling author of Hell’s Princess and the cinematic history, Ripped From The Headlines!, unearths a nearly forgotten true-crime of obsession and revenge, and one of the first—and worst—mass murders in American history. All it took was one final trigger, and in 1927 Bath, Michigan, would become a wasteland. MANIAC is Harold Schechter’s gripping, definitive, exhaustively researched chronicle of a town forced to comprehend unprecedented carnage, and the triggering of a “human time bomb” whose act of apocalyptic violence would foreshadow the terrors of the current age. https://amzn.to/3cArokV

National Something on a Stick Day

Is it time to opt for the “early bird special” when it comes to dinner? A new survey finds 6 in 10 Americans regularly wake up with “food hangovers” or stomach cramps. A poll of 2,000 people finds, on average, Americans will have nine of these morning stomach cramps every month due to late-night meals. (https://bit.ly/2OG6wz6)

A team from the University of Waterloo finds those who regularly try to impress or influence others using misleading, impressive-sounding misinformation frequently buy in to the same junk they sell to others. (https://bit.ly/3t8Muwa)

A Florida man who nearly hit a gas pump pulled out a package of “Dank Gummies” instead of his driver’s license to show a deputy who was trying to help him. Deputies said they were called to a gas station in Naples shortly before midnight on March 1st because witnesses said a suspicious man had nearly hit a gas pump and appeared to be under the influence. Records show Demecio Lopez saw the deputy and immediately asked for help calling AAA because his car wouldn’t start, even though the keys were not in the ignition at the time. Lopez said he didn’t have the keys to the vehicle but then rummaged through his pockets and pulled out the keys. The deputy then asked Lopez for his driver’s license so he started rifling through his pockets again and this time pulled out a small green package labeled “Dank Gummies” with “cannabis-infused” written on it as well. The deputy asked if Lopez just pulled out THC gummies and Lopez claimed it was normal candy but when he was asked to hand over the package, the deputy saw that it was labeled as containing 500 mg of THC. Deputies said Lopez also had a package of “Medicated Nerds ropes” that contained 400 mg of THC per rope. Lopez was taken into custody and a small baggie of cocaine was found on his person in addition to the THC-infused candies. (https://bit.ly/3eDSR6H)

CBS extended “The Talk’s” hiatus for a second time amid an investigation into Sharon Osbourne’s comments. The whole staff reportedly hates each other.(https://pge.sx/3r5e2B6)

Vin Diesel's son is joining the fast and the furious franchise. (https://bit.ly/3f10hks)


The next time your spouse hides out in front of the TV instead of helping with chores, you might want to share this with him or her. Researchers (University of Missouri, Brigham Young University, Utah State University) found that married couples are happier if they share household responsibilities. The researchers surveyed 160 couples married for an average of five years with at least one child under age five. The more wives perceived that their husbands were participating in family work tasks, the better the relationships were for both spouses. Couples’ relationships also improved when wives felt that their husbands were close with their children. Couples don’t need to divide chores exactly equally in order to see benefits.

Tana Douglas, the first female roadie in Rock History, has a new book out about the time she spent touring with Ozzy Osbourne, Elton John, White Snake, INXS, and the Red Hot Chili Peppers. (https://bit.ly/2PhuZuA)

Two zoos in the Czech Republic have taught their chimpanzees to video chat with each other via Zoom. (https://bit.ly/3cVx9IK)

General Mills is under fire after a family claims they found shrimp tails and dental floss in their boxes of cinnamon toast crunch. (https://bit.ly/399ciR8)

The human body literally glows. It might be hard to see with your naked eye, but everyone you pass by every day is literally glowing. The human body emits a small quantity of visible light ("visible" in the technical sense—the illumination is about 1,000 times less intense than levels of light that we would actually be able to see). Researchers in Japan used a special camera to track this glow and found that it fluctuates throughout the day, with the body emitting its lowest levels of light around 10 a.m. and highest at around 4 p.m., a rhythm the scientists attribute to the changes in one's metabolism.

An accountant witnessed meetings between Honduras President Juan Orlando Hernández and a drug trafficker in which they planned the trafficking of cocaine to the U.S., federal prosecutors in New York said this week. (https://fxn.ws/3l4sV4Y)

Police say they have recovered a 400-pound playground slide that was stolen from a playground in Washington state. In mid-December, police say someone stolen a massive slide from the playground at Tierra Vida Park in Pasco. Detectives came face-to-face with a 400-pound playground slide inside a child's bedroom in a mobile home in Burbank. Pasco police say they made the discovery while investigating recent catalytic converter thefts, where thieves cut up your car’s exhaust system so they can sell your catalytic converter to a scrap metal dealer for the value of the heavy metals inside it. While investigating the recent thefts, police located a potential suspect and obtained a search warrant for a property in Burbank. Detectives said not only did they find the catalytic converters, they found the large slide. Police arrested 30-year-old Dustin Allen Bushnell on investigative hold for possession of stolen property for the slide.(https://bit.ly/2Og8tm2)

Three people floating on Lake Michigan Tuesday afternoon were rescued - although they didn’t initially want assistance - from what could have become a deadly situation. The adults were in a small inflatable raft, floating about 100 yards from shore at Grant Park Beach in South Milwaukee, Wisconsin. Around 4:30 p.m., the fire department responded to a report that those in the raft were possibly in distress. Authorities deployed an inflatable rescue raft and made contact with the boaters. None of them were wearing life jackets, authorities said. Initially, they didn’t want the fire department’s assistance. They agreed to be escorted back to shore after they were educated on the dangers of being out on Lake Michigan in a small, inflatable raft without a personal floatation device. At the time of the incident, the air temperature was 55 degrees and the water temperature was 34 degrees. In those temperatures, a person in the water can suffer from exhaustion and become unconscious in 15 to 30 minutes.(https://bit.ly/3rDjdcD)