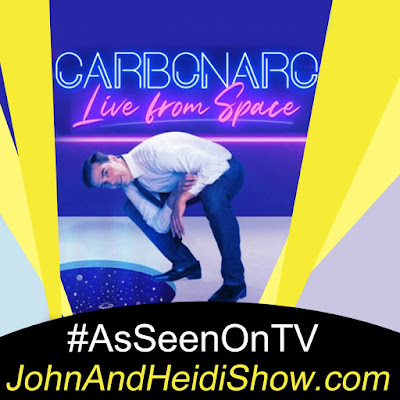 Michael Carbonaro has performed over five hundred comically perplexing and improbable feats of magic on his hit TV series, The Carbonaro Effect on truTV. Now, Michael is taking his show on the road (virtually) and, for a limited time, you can feel the effect with Carbonaro Live From Space! For more information about the tour or to purchase tickets, please visit www.MichaelCarbonaro.com

A new study says that the key to a happy marriage may come down to what’s in your DNA. Researchers at the University of Arkansas report a specific gene variation may play a big role in whether or not newlyweds feel satisfied during the first years of their marriage. They say this gene impacts traits related to both bonding and gratitude. (https://bit.ly/3dAw2QB)

A new survey finds that one in three drivers admits their cars are full of junk and haven’t been washed in months. (https://bit.ly/37EPA2x)

Swedish authorities pulled a 41-year-old man aside on the platform at a train station and consented to a search that involved him stripping down to his underpants. But customs workers said the man claimed to be shy and refused to strip down further than his undies. Police said the man attempted to secretly remove a package from his underpants and wrestled with customs officers who tried to stop him. He bit into the upper arm of an officer during the struggle.

Armie Hammer has found a buyer for his home. (https://bit.ly/3qMUoKB)

The zombie-apocalypse film Army of the Dead will debut on Netflix on May 21. Set in Las Vegas, the movie stars Dave Bautista. The story follows a group of mercenaries who “take the ultimate gamble, venturing into the quarantine zone to pull off the greatest heist ever attempted.” The project was written and directed by Zack Snyder. The first teaser for the film is coming Thursday. https://twitter.com/ZackSnyder/status/1363501327184134146

A man was shot with his own gun after robbing a man of his phone in South Africa. Police say the man was on his way to a bus stop when he was approached by two men, one of whom held him at gunpoint while the other robbed him of his phone. The victim grabbed the gun and a shot went off which hit the robber. The other robber grabbed his wounded friend and they fled with the phone.

A travel agency booked a family on the wrong flight, so they landed in Portland, Oregon, instead of Portland, Maine.

In the snack food world, cranking up the crisp can lead to a bigger hit, and there are entire research teams working to ensure that the texture of food is specifically calibrated to maximize crunch. The use of the word “crispy” and “crispiness” in Yelp reviews of restaurants has increased over the past decade by 20 percent, and an analysis of 7,000 menus found “crispy” is the single most common adjective used to describe texture. When food researchers measure how much people enjoy snack foods as a whole, the crunchier the rating the higher the evaluation.

A robbery suspect was in the process of going through a house in Germany when the residents returned. In a rush to escape, the suspect left his wallet and ID at the scene of the crime. Why did the thief have his wallet out? Police say he was attempting to make an online purchase of computer parts for the computer he was about to steal.

Every person has a unique tongue print.

Officials at a school in British Columbia had windows screwed shut or blocked from opening wider than a few inches after teachers began using them to compensate for poor ventilation.

Passengers were settling back into their airplane seats and starting to relax when a huge explosion and flash of light interrupted an in-flight announcement. The Boeing 777-200, headed from Denver to Honolulu on Saturday with 231 passengers and 10 crew aboard, suffered a catastrophic failure in its right engine and flames erupted under the wing as the plane began to lose altitude. On the ground, people in a Denver suburb reacted in horror as huge pieces of the engine casing and chunks of fiberglass rained down on a sports field and on streets and lawns, just missing one home and crushing a truck. The explosion, visible from the ground, left a trail of black smoke in the sky, and tiny pieces of insulation filled the air like ash. The plane landed safely at Denver International Airport, and no one on board or on the ground was hurt. The Federal Aviation Administration said in a statement that the airplane experienced a right-engine failure shortly after takeoff. Video and images posted on Twitter showed the engine fully engulfed in flames as the plane flew through the air. https://twitter.com/BeschlossDC/status/1363246836786597893

A German postman was busted for stealing about $15,000 out of undeliverable mail. The man took mail returned to the post office and went through it to steal any cash inside. The man worked at the lost mail distribution center and was arrested after police found envelopes from stolen mail inside his recycling bin. Money was recovered from the man’s residence.

A Wisconsin restaurant owner is using his own money to help struggling local restaurants during the pandemic. Adolfo Melendez, owner of Tex-Mex restaurant El Mezcal in Stevens Point, Wisconsin, has purchased more than $2,000 in gift cards to restaurants in his community to raffle off to his customers. As of December 1, 2020, more than 110,000 eating and drinking establishments across the country have closed temporarily or for good as a result of the pandemic, according to the National Restaurant Association. Melendez says his restaurant got second place in a local contest for favorite restaurants and his ‘prize’ was having $300 in gift cards purchased from him. At that moment Melendez figured he needed to pay it forward. At the end of last year, he began to buy gift cards from local restaurants in his community and raffling them off to customers on his restaurant’s Facebook page. Winners received $20 gift card to a local restaurant.