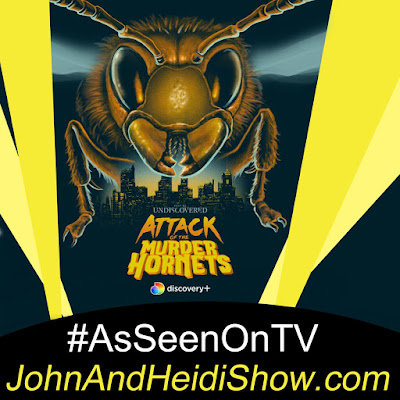 This weekend we visit with 3rd generation beekeeper Ted McFall. He's featured in a brand-new feature documentary, ATTACK OF THE MURDER HORNETS, by filmmaker Michael Paul Stephenson launched last month on Discovery Plus. The international phenomenon of the Asian Giant Hornet, known famously today as the “Murder Hornet,” came buzzing in and scientists quickly discovered their destructive force and detrimental impacts on other species including honeybees. https://www.discoveryplus.com/

A new study says talking on the phone for ten minutes could make you feel less lonely. (https://cnn.it/2ZFNfjw)

A new OnePoll survey finds three-quarters of Americans feel they need to escape the real world due to the stress of COVID-19. The survey reveals 71 percent of respondents started playing video games more often during quarantine than they were before the pandemic. (https://bit.ly/3upeEnN)

In the UK a burglar reportedly told his victim that her house was not hers anymore after he spent quite a bit of time drinking and eating during the theft. A court heard that the thief tried to make himself feel at home by consuming food from the fridge. He also took a can of Foster’s lager when he felt the need to quench his thirst. When the owner came home she asked the man what he was doing. He replied, “It’s not your house because I’ve been here all day.”

There’s a lot of nostalgia for the ’90s going around the Star Trek franchise right now, with Lower Decks paying homage to that era of the franchise and the upcoming Prodigy animated series bringing back Kate Mulgrew’s Captain Janeway. There’s also Picard, a continuation of Star Trek: The Next Generation. But could the movie series follow the trend of the TV shows and switch from rebooting ’60s Trek to TNG? That’s what Brent Spiner is expecting. The actor thinks it’s just a matter of time before Paramount gives the Next Generation cast the same treatment they gave Kirk and the rest of the original Enterprise crew and reboot them on the big screen.

Close to two-thirds of Americans who have not yet retired say that when the time comes they will work for pay after retiring. The reason given most often has nothing to do with money — they simply want to stay busy.

A report found that farmers markets aren’t that great of a deal.

A woman in Brazil underwent routine cosmetic surgery for a tummy tuck and a breast job. But after surgery she mysteriously developed the compulsion to steal.

A survey of drivers found that a majority of them talk to their cars regularly and 20% worry about its feelings.

Ketchup was sold in the 1830s as medicine.

In China, a guy wanted money. So he set up a makeshift roadblock and started charging a toll to truck drivers. For payment he accepted cash or cigarettes. The man was sentence to some prison time and one year of probation for “picking quarrels and provoking troubles”.

The Butler County, Ohio, bomb squad was called to a church (in New Miami) on Thursday. When the responding officers heard purring instead of ticking in a black bag, they used their X-ray equipment to view what was inside. Six day-old kittens and their mother were found along with a note stating they had been born on Wednesday. The note said the mom’s name is “Sprinkles”. They are being cared for at a local humane society.

Couple Hosts Delivery Driver For 5 Days After Her Car Got Stuck In The Snow
https://www.sunnyskyz.com/good-news