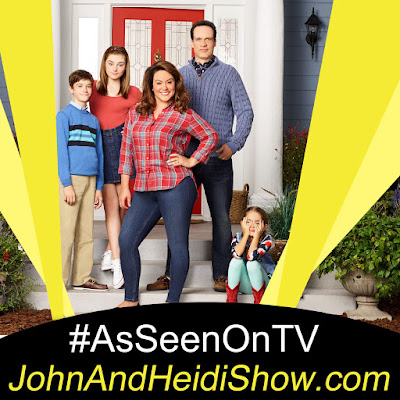 This #MovieStarMonday we visit with Diedrich Bader (The Drew Carey Show, Office Space, Ice Age, Surf's Up, The Simpsons, Batman: The Brave and Bold, The Beverly Hillbillies, Napoleon Dynamite, Miss Congeniality 2, Balls of Fury, Meet the Spartans and MANY MORE)

His NEW SHOW (American Housewife) celebrated its 100th episode milestone, Wednesday (2/24) 8:30-9:00 p.m. EST, on ABC. Episodes can also be viewed the next day on demand and on Hulu.com

A study published in the Wall Street Journal found that men who pose with cats in their online dating profile have a lesser chance of being selected by women. Men who have cats in their profile pictures look less masculine. (https://bit.ly/3kafq3h)

In what appears to be a new record for extreme DUI, a motorist’s blood alcohol content was measured at .77 -- more than nine times the legal limit -- after he crashed his car following a short police chase. According to investigators, the driver was involved in a hit-and-run in Madras. Upon locating the suspect vehicle, cops sought to pull over the driver, but he sped away. A short chase ended when the man, who cops described as “HIGHLY intoxicated,” lost control of his car and crashed into a concrete barrier. The driver was subsequently transported to a local hospital for a medical evaluation. A blood sample taken from the suspect was tested and showed his blood alcohol level was .778. The state’s legal limit is .08. The motorist, who is facing multiple criminal charges, was driving on a suspended license due to a prior DUI conviction. Previously, the highest BACs reported in these pages were the .72 recorded by an Oregon woman in 2007 and the .708 recorded by a South Dakota woman in 2009.(https://bit.ly/3kdZtcz)

Kim Kardashian was seen without her wedding ring after filing for divorce from Kanye West on Friday. (https://pge.sx/37CerEd)

The U.S. Postal Service has released the first images of its new Mail Truck, which is expected to hit the road in 2023. The Post Office likes to honor iconic Americans by putting their images on stamps and posters. The Board of Directors voted on three possible models back in November.(https://bit.ly/3pRhTB9)

When it comes to a fear of germs, 39 percent of respondents in a nationwide survey said they feared picking up germs from a public restroom more than any other public place. Since germs are the result of unsanitary conditions, the survey found that for 66 percent of the respondents “unclean conditions” were most apt to lead to a bad impression of the restroom. No toilet paper was a distant second at 13 percent, followed by odors at 11 percent. And what is the top reason a public restroom makes a good impression on visitors? 77 percent said cleanliness.

What a strange love affair people have with the pork product known as bacon. A survey revealed 43 percent of Canadians would rather eat bacon than have sex.

A Nile Crocodile in Florida underwent surgery to remove a shoe from its stomach. Doctors say this was risky procedure. (https://bit.ly/3bygsSO

Roughly 4 in 10 Americans say they would choose to vote from their computer or mobile device in the next election if possible.

A lion pounced on a zookeeper in Germany this past Sunday — and she managed to escape the terrifying attack with no major injuries.(https://bit.ly/3dBLyM0)

A bizarre video of a man who sat on a toilet in the middle of a busy street in Bristol, England has gone viral on social media. The video was taken in Lawrence Hill, close to the Lidl supermarket. Motorists are seen in the video having to negotiate their way around the man as he reads a paper while sitting on the toilet. The video of the man, who dressed in shorts and a T-shirt and is wearing a mask, has been shared across social media. Some have described him as a “legend,” saying we could all “do with a laugh” at the moment. While others have criticized him for compromising road safety. (https://bit.ly/2Nyba1r)

A fire in a Bowling Green hotel room resulted in the arrest of a man on suspicion of intentionally setting the fire. The fire occurred at Wingate Hotel and the Bowling Green Police Department was contacted to assist the Bowling Green Fire Department at the scene. According to an arrest citation, the BGFD managed to contain the fire to one room. City firefighters found 57-year-old John Cagle unconscious outside the room and treated him for smoke inhalation. “When Cagle regained consciousness, he made comments to firefighters saying he set the fire because he was upset at his girlfriend who was not on scene at the time,” the arrest citation said. Cagle gave further statements to police in which he admitted to setting the fire. “He said his girlfriend had left last week and sent him a message earlier tonight that upset him,” his arrest citation said. “He set a bag of her belongings she left in the room on fire and threw it up against the door to his room.” Cagle was arrested on charges of first-degree arson and first-degree criminal mischief. (https://bit.ly/3k9pvO0)

Stranger Buys Boy A Basketball Hoop After Seeing Him Shooting Hoops Into A Trash Can https://www.sunnyskyz.com/good-news/