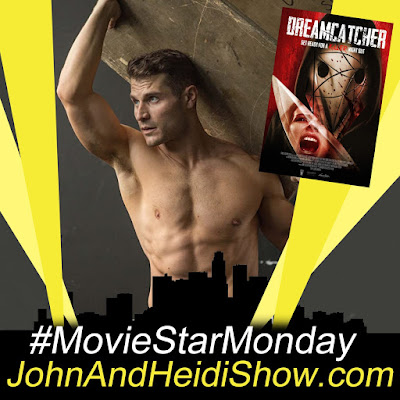 This #MovieStarMonday we visit with Lou Ferrigno Jr (S.W.A.T., 9-1-1, Rush: Inspired by Battlefield, How I Met Your Mother, Days of Our Lives, Teen Wolf) about his new horror/thriller film DREAMCATCHER. Available now! https://amzn.to/3qwU0iq

National Everything You Think is Wrong Day

A new study says 65% of college students have skipped buying text books during the pandemic. (https://bit.ly/3kFAPla)

A new study finds that there is a risk the public can be infected with COVID through sewage spills and water sources contaminated with feces. While researchers say airborne droplets are the main route of coronavirus infection, other avenues for transmission exist. Previous studies have discovered COVID-19 in untreated wastewater. (https://bit.ly/389Dfnn)

A Seattle Woman bought a crochet kit at a thrift store and found a kilogram of cocaine hidden inside. (https://bit.ly/3uQ3VDg)

Paris Hilton says David Letterman “purposefully” tried to “humiliate” her during 2007 interview about jail. Paris says that Letterman agreed not to mention her jail sentence when she went on the show, but he quickly brought up her time behind bars, bluntly asking how she enjoyed it. (https://fxn.ws/3q93YGG)

The “Jersey Shore” stars are back in a bubble to shoot the rest of their family vacation. “Jersey Shore: Family Vacation” has begun shooting the second half of season four ... and it appears Pauly D, Vinny, Ronnie, JWOWW, Deena, Angelina, The Situation and their family members are locked down inside Pennsylvania's Woodloch Resort. (https://bit.ly/3eas5Cu)

The Orbital Assembly Corporation has announced plans to build the galaxy’s first hotel in space. The intergalactic resort will be named the “Voyager Station.” (https://bit.ly/2OelLPr)

If you were one of the people who felt cheated when Kellogg’s discontinued their Cinnamon Frosted Flakes release, then buckle up, because the ride isn’t over just yet. The iconic brand, which released Mashups, Frosted Flakes with Marshmallows, and cereal bars all in 2020, just announced the release of a new flavor: Frosted Flakes with Crispy Cinnamon Basketballs. Though the cinnamon-flavor aspect of the newest release may not quite be what you had in mind, what is new is the brand’s first collaborative effort with an athlete. Teaming up with superfan and Hall of Fame basketball star Shaquille O’Neal, the one-of-a-kind collaboration marks the first time Tony the Tiger has shared the front of the box with someone else. They will be available in April.

Let me be clear: it’s never OK to do a second day in the same underwear. But if you’re 9 and you’re mom’s not checking, it happens. And if you’re 19 and in college and mom’s not around to do your underwear, it happens. It’s not OK, but it happens. And for the rest of us — how bad is it to go two days straight in the same undies? Here’s some good news. As far as health is concerned, there is no issue with wearing the same pair of underpants two days in a row (says J. Scott Kasteler, MD). That is, so long as those undies are clean to the eye. In fact, from a health standpoint, you could go several days without a fresh pair.

A survey of parents reveals nearly half find car trips with kids stressful. The biggest stressors: squabbling siblings; unpredictable bladders; complaining; messes in the back seat.

Manicuring the nails has been done by people for more than 4,000 years.

A wild sheep was rescued in Australia carrying 75-pounds of wool. (https://bit.ly/3aTDx3t)

A Gulf Shores woman was arrested on an animal cruelty charge after officials say she took her neighbors’ goat and painted it without permission. 34-year-old Erica Marie Farmer was arrested for the crime. Farmer also faces a theft of property 2nd charge. According to officials, the theft of any livestock in the state of Alabama falls under the felony guideline. Farmer’s bond was set at $6,000. Deputies say, Farmer removed the goat from her neighbor’s property and brought it to her house to show her child. They say at some point she decided to paint the animal and post the photos to social media. They say when the goat’s owner discovered the animal was missing, they called a different neighbor to ask if they had seen the goat and at that time the neighbor told them photos of the painted animal had been posted to social media. The goat’s owner called authorities. Deputies say the goat was still at the suspect’s house when deputies arrived. (https://bit.ly/2Oa7HXb)

She was caught orange-handed! A woman was busted for a home invasion in Oklahoma — thanks in part to “Cheeto dust” found in her teeth. Sharon Carr was arrested on a first-degree burglary charge after allegedly committed the dangerously cheesy act Friday at a home in Tulsa. Cops say they arrived at the home that night, where a mom of two young kids had called 9-1-1 to report that another lady had pried a screen off her window and gotten inside. The snack-loving sneak had already fled — but cops say they found “a bag of Cheetos and a bottle of water on the floor near the open window.” A few seconds later, however, Carr allegedly emerged from the shadows. The mom ID’d her as the invader — and the bust was further cemented when they found the incriminating orange snack-food residue still stuck in her teeth. Cops think she dropped the bag while making her escape. (https://bit.ly/3bU98kL)

Doctor And Nurses Pack SUV And Drive Through Snowstorm To Save Premature Baby https://www.sunnyskyz.com/good-news/