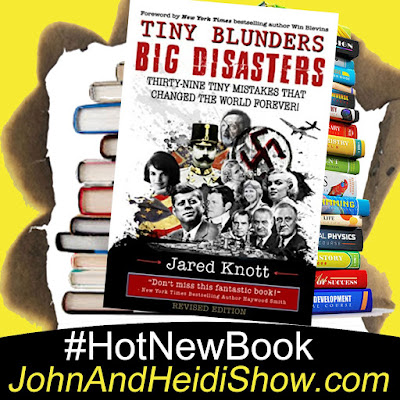 National Write Down Your Story Day

A new survey finds that most Americans agree on the passage of a new COVID-19 Relief Bill, but are bitterly divided on most other political issues. The poll by political science research project Bright Line Watch shows that 3 in 10 Americans think their differences are so irreconcilable that they support their state seceding from the U.S. Some people support America dividing up. (https://bit.ly/2MGur0v)

Two drunk pals were left stranded on an inflatable mattress two miles out to sea but they only panicked when they ran out of beer. Jackson Perry and Noah Palmer had to be rescued after strong winds dragged them two miles off the coast of Perth, Australia. But despite facing drifting out to sea - the pair saw the funny side and said they would simply “check the wind forecast” next time. The two pals hopped on the inflatable mattress on Saturday, along with an cool box full of beers, outside Palmer’s oceanside house in Mandurah, south of Perth, planning to stay close to land. However, strong winds dragged them two miles out to the ocean where they were stranded for almost three hours. To make things worse, the inflatable mattress had holes and began to sink, their phones were dying and they ran out of beer. Palmer had to jump out every ten minutes and inflate the mattress up until help arrived. (https://bit.ly/3qh6b2O)

Sean Penn's hairstyle has once again gone viral following his appearance at this year's Golden Globes. The 60-year-old actor appeared during the award ceremony to discuss the work being done to combat the coronavirus pandemic by CORE, the relief organization founded by Penn. (https://fxn.ws/3dWyW2h)

Hilaria and Alec Baldwin have welcomed their sixth child together. (https://cbsn.ws/2MEHqjr)

An Arizona man found earlier this month near a water tower, his hands bound with a belt and a bandana stuffed in his mouth, had a harrowing tale for police. Brandon Soules told authorities that two masked men knocked him unconscious, put him in a vehicle, and drove him around before dumping him at the tower (in Coolidge). The kidnappers’ motive, he said, was a large amount of money his father had hidden around town. Investigators, however, determined that Soules story was false. As for Soule’s motive for lying: Police say he “made up the story as an excuse to get out of work.”

In 1961 a farmer in Wisconsin said that he was visited by the aliens who left him a gift. The 60-year-old said he saw an object land on his farm. He shared that the metallic UFO was like two reversed bowls with “exhaust pipes” on the edge of it. The UFO didn’t land fully on the ground but when the door opened the farmer came in contact with three aliens wearing helmets who seemed to be of “Italian descent.” They gifted him with some pancakes.

Several dozen people gathered beside a frozen lake in eastern Poland over the weekend to build a thousand snowmen to raise money for a sick toddler. Organizers of the fundraising event (in Korycin) hope to help pay for life-saving treatment for a 21-month old (Bartek Bojarzyński), who has a serious heart defect. The boy needs specialist surgery that can only be performed at a hospital in the United States, and supporters hope to raise over $180,000 to enable him to have the operation, scheduled for April 2.

People whose mouth has a narrow roof are more likely to snore. This is because they have less oxygen going through their nose.

The Wife of Convicted Mexican Drug Lord El Chapo was arrested this week for running his drug cartel. Emma Coronel Aispuro is a former supermodel who was in talks to get her own reality show. (https://bit.ly/3klQPZq)

A funeral home worker was arrested and charged with stealing a wedding ring from a woman who died. According to the Portland Press Herald, 51-year-old Stuart Weston is facing felony charges after police say he stole a diamond wedding ring from 102-year-old Laura Wood. According to the Press Herald, Weston, who worked at Autumn Green Funeral Home in Alfred, was sent to pick up Wood's body after her death. Her family learned that the ring with an appraised value of $4,000 and other items were missing when they went to retrieve Wood’s belongings at the funeral home. Weston was arrested after police obtained video evidence of him selling the ring to Maine Gold and Silver in South Portland. The funeral home told the Press Herald that it terminated Weston’s employment after learning of the alleged theft. (https://bit.ly/3sM50dx)

Pedestrians on a London street were shocked to see a naked man streaking down the pavement with three police officers chasing after him. The scenes, captured in Notting Hill, west London at around 8:00 a.m. show the man sprint along the high street with three officers in hot pursuit in temperatures of around 46 degrees Fahrenheit. He was arrested by police and taken into custody at a central London police station. 29-year-old Ross Springham appeared at Westminster Magistrates' Court later the same day charged with indecent exposure. During the footage, the man runs past a police car as two members of the force chase after him in front of stunned bystanders. Moments later, a third officer jumps out of his police car and joins his colleagues in pursuit of the naked man. The man then crosses the road as one of the officer's follows close behind. At Westminster Magistrates' Court, Springham pleaded guilty and was remanded in custody. www.dailymail.co.uk