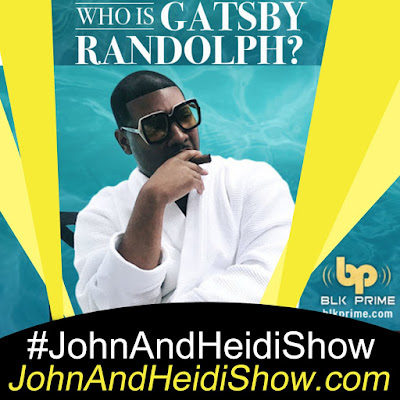 Today we visit with Gatsby Randolph. His story is an amazing one... it takes him from a small southern town... to the RED CARPET! You can learn all about it in the new documentary film “Who Is Gatsby Randolph”

Australian researchers have found that the “window of cannabis impairment” can last anywhere from three to ten hours. The length of marijuana intoxication is being studied in order to answer questions such as “how long should a cannabis user have to wait before operating a vehicle?” (https://bit.ly/3dgXFO3)

A new study finds that the average woman pops 4,153 pimples in her lifetime.(https://bit.ly/2OPTpf6)

Two people face charges in Clearfield County after state police were called to a Dollar General in Chester Hill Borough for a report of a woman wearing a hard hat, holding a crockpot lid as a shield and carrying a bathroom scale. 25-year-old Tiffany Kerfoot of Philipsburg, was under the influence of drugs and said people were chasing her and trying to hurt her. She also told state police she just saw a murder at the residence where she lives with her boyfriend, 26-year-old Nicholas Rowles. When troopers went to investigate, Rowles told them there was no murder and that Kerfoot has a drug problem. As state police were walking out, a trooper spotted a glass marijuana pipe in the middle of the living room floor. Rowles is now charged with misdemeanor possession of drug paraphernalia and Kerfoot, who was taken to a hospital, was cited for public drunkenness. (https://bit.ly/3s449Uy)

Brad Pitt was photographed exiting a Beverly Hills medical center in a wheelchair after having his wisdom teeth removed. Pitt was recently revealed as a member of the ensemble roster the Academy Awards tapped to present at the April 25th ceremony, so he likely wanted to be in great dental shape for the show. (https://pge.sx/3wZZl6z)

Producers of The Oscars are taking no chances with COVID-19 and will have mandatory masks and social distancing requirements at this Sunday’s Ceremony. (https://yhoo.it/3glYaZk)

A New York City man stole a CBS news van and took it for a joy through Manhattan, crashing multiple times. (https://bit.ly/3siP69Q)

A Florida Daredevil was caught on camera driving through a traffic arm and jumping his car over a rising drawbridge. Police say they have identified the driver and he will likely face charges. (https://bit.ly/2Q7Blhj)

The NYPD confiscated a T-Shirt gun that was mounted to a rappers Humvee.(https://bit.ly/3aiWsUI)

A team of MIT Scientists has translated the structure of a spider web into music. (https://cnn.it/3wXk4HT)

STD's have reached an all-time high in the U.S. for the sixth consecutive year. (https://bit.ly/3tkGEbd)

The healthiest place in the world is in Panama. A small valley near Volcán in Panama has garnered the distinction of being the world's healthiest place to live, according to a 2018 report by International Living. Called Shangri-La Valley, the area is home to beautiful scenery, a low cost of living, and a significantly longer life expectancy than the surrounding areas. All in all, the world's healthiest areas have some common factors, according to the ranking: a warm climate, an active social scene, healthy food, and a slower pace of life that makes for less daily stress.

The Australian Navy is under fire after a dance troupe was hired to celebrate the unveiling of a new supply ship by twerking for top military brass.(https://bbc.in/3n0sI3M)

A Florida woman is accused of stealing a car from a dealership under the pretense of taking a test drive. 34-year-old Shonteria Nicole Story of Auburndale, was charged with grand theft, according to Polk County Sheriff’s Office online booking records. According to the Winter Haven Police Department, Story visited the Chevy Center in Winter Haven on Monday evening, saying she wanted to buy a car. Story had been emailing an associate at the dealership and arranged the visit. Story was shown a 2021 Chevrolet Equinox. Because of COVID-19 restrictions, the dealership does not allow employees to ride with customers. The employee made a copy of Story’s driver’s license and told her to take a short test drive. After 90 minutes, the associate tried to call Story but could not make contact. The employee then called police “since it was obvious Story was not returning.” The vehicle was equipped with OnStar, a GPS navigation system, which allowed it to be tracked to a location in Bartow. Story was booked into the Polk County Jail.(https://bit.ly/3wDeqdM)

A Tennessee man was arrested Wednesday on charges he deliberately ran over and killed a goose that had been a fixture at a local sports bar for over a decade. 40-year-old Nathan Haskins was hit with felony aggravated animal cruelty raps in the March 20th death of beloved Barnyard in Old Hickory, a Nashville neighborhood. The feathered creature was described as “friendly,” and had been a mainstay at Sam’s Blue Turtle Bay Marina, a bar and grill, for close to 15 years. Cops said Haskins was identified as the driver of a black Chrysler 300 sedan seen on surveillance video stopping in front of the bird in the Old Hickory marina. The driver then accelerates and deliberately rams into Barnyard before speeding away. An anonymous tipster told investigators that Haskins, while at a local bar, had allegedly confessed to the murder. He later confirmed to Metro Animal Care & Control and cops that he was the driver Haskins was being held at the Davidson County Jail on $3,000 bond. (https://bit.ly/3slk6WH)