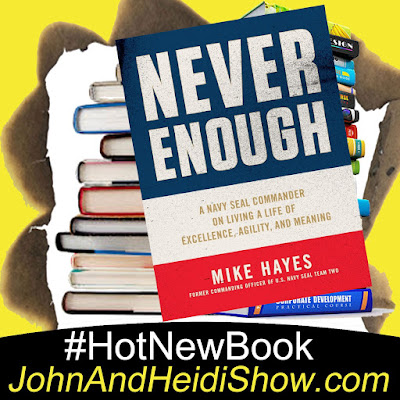 This weekend we visit with author Mike Hayes. Hayes is the former Commanding Officer of SEAL Team Two, White House fellow, and the second highest-ranking Navy SEAL to ever write a book. Fantastic praise, including General McRaven and Brad Meltzer. His new book is called NEVER ENOUGH: A Navy SEAL Commander on Living a Life of Excellence, Agility, and Meaning - https://amzn.to/3naGmlc

National Pigs in a Blanket Day

According to a new survey conducted by OnePoll, most women wish their hygiene products were better for the environment. The poll shows that 32% of women have increased their use of eco-friendly menstrual care products.(https://bit.ly/3dAcBHr)

A new survey found that one third of remote workers would rather quit their job than go back to working in their office. (https://tek.io/3x5EMpb)

Police say a local man decided to settle an ongoing dispute on Saturday by driving to his adversary's house while drunk and assaulting him. Police spokesman Lt. Robert Grady said that Police arrested 62-year-old David Rose after the 5:30 p.m. incident. On Saturday, police went to a home on Fairbank Circle on a call about a fight. “Upon arrival, officers observed an assault in progress,” Grady said. Police pulled Rose away from the other man who had injuries to his face. The man and Rose are in the midst of an ongoing dispute. For some reason, police said, Rose decided to leave his home and drive 1.5 miles to the other man’s home and attack him. Rose appeared to be drunk and several witnesses told police they saw Rose driving and getting out of his car. The car was still running, Grady said. Police charged Rose with assault and battery and driving under the influence of liquor. Rose was scheduled to be arraigned Monday in Framingham District Court. Results were not available. (https://bit.ly/3fTxn6a)

Demi Lovato is set to star in a comedy TV show about having an eating disorder.(https://bit.ly/32bnyZg)

Reality TV personality and friend to Kim Kardashian, Jonathan “Food-God” Cheban, has listed his fully furnished New York City home for $2.6 million dollars. This guy has appeared on “Keeping Up with the Kardashians” and its spinoffs. (https://bit.ly/3sxwfrJ)

In Tokyo a policeman was arrested after he got drunk and wandered into the wrong house to take a bath.

In California, a whale watching group was surprised with a stampede of 2,000 dolphins. (https://bit.ly/2R56Fx1)

Broadway producer Scott Rudin is stepping back from his ventures after a report surfaced of his abusive behavior towards employees. He’s accused of throwing a baked potato at an employee during a tirade. (https://bit.ly/3edxpU3)

The Dave Ramsey Company is being sued by employees for creating a cult like atmosphere. (https://bit.ly/3dtYyTG)

Money Manager Ron Baron says Elon Musk is going to be a trillionaire because Space X is poised to be bigger than Tesla. (https://bit.ly/3sv7snS)

The brain chemicals that create romantic bliss fade in about 18 months.

China has launched a hotline for its citizens to report anti-communist comments so that the citizens who made them can be punished. (https://bit.ly/3x5AdeG)

Is there a raptor on the loose in Palm Coast? One homeowner is questioning whether the prehistoric creatures are back after seeing a dinosaur-like animal running across her yard. FOX 35 viewer Cristina Ryan says her security camera captured the footage this week. “Any animal we can come up with that would be ‘walking’ at 3:40 in the morning, wouldn't walk this way,” she told FOX 35 News. “Maybe I've watched ‘Jurassic Park’ too many times, but I see a raptor or other small dinosaur!” She says everyone she's shown the video to comes up with the same conclusion: it looks like a baby dino. “Some say a large bird, but that makes no sense -- since whatever it is appears to have front legs. So not sure? Lol. I'm sticking with raptor myself,” she joked. Viewers online debated about what the animal could be. "Looks like a Komodo dragon or some type of lizard!” one person commented. Another commenter wrote, “UFO recently sighted and guess this could be the CEO checking things out.” (https://bit.ly/2QwVNrJ)

Moments after being released from custody, an Arkansas man stole a police car that was parked in front of the jail, earning him a return trip behind bars. According to investigators, 33-year-old Cordell Coleman drove away from the Pulaski County jail around 2:40 a.m. in a marked Little Rock Police Department SUV. A police report notes that a surveillance camera recorded Coleman entering the unlocked 2018 Ford Explorer, which was parked near a jail sally port. Coleman had been released from custody following a public intoxication arrest a day earlier. The stolen vehicle had been driven to the jail by an officer who was assisting with the booking of a prisoner. “After completing the process, I returned to discover my patrol vehicle had been taken,” the cop reported. Investigators quickly tracked the hot wheels to an apartment complex about ten miles from the jail, where Coleman was found inside the vehicle. Coleman, who had been the last prisoner released from the jail, was arrested and eventually returned to the lockup. He was charged with felony theft. (https://bit.ly/32qd3BE)