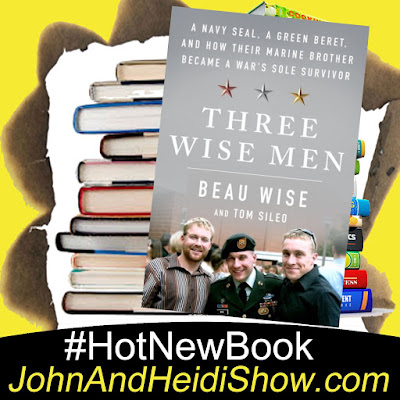 On Friday we visit with American Hero and author Beau Wise about his new book Three Wise Men: A Navy SEAL, a Green Beret, and How Their Marine Brother Became a War's Sole Survivor https://amzn.to/33cGU0R

Do you work random hours? A new study finds that inconsistent shifts can be harmful to your health. Researchers from Waterloo University say inconsistent shift work is linked to a number of adverse health outcomes and can even increase susceptibility to various infections. (https://bit.ly/3vnNOMq)

A man who drove a car into a retention pond is now facing charges. Officers were originally responding to a criminal mischief call at a home in Casselberry. Investigators said Justin Lorrison went to that home asking the woman who lives there for help after he was kicked out by his grandmother. The woman tried to offer the 29-year-old $100 to stay at a nearby hotel, but Lorrison refused twice saying, “Don’t play, I will light your (expletive) house on fire.” Records show the woman went back inside, then looked out the window to see if Lorrison had left. The woman told officers she watched as Lorrison then backed his gold Cadillac into her car, shoving it about a foot, then drove off. While police were speaking with the victim, officers were patrolling the area looking for Lorrison’s car. Records show police spotted the Cadillac but it took off speeding until officers lost sight of it and they did not pursue it. Witnesses told police the car appeared to lose control and ended up in a retention pond. Lorrison reportedly smelled of alcohol and failed a sobriety test. He faces charges of hit-and-run, driving under the influence, and reckless driving. (https://bit.ly/3dhuoTp)


“Nomadland” filmmaker Chloé Zhao became the first Asian woman to win the best director Oscar, and then she won a second Oscar as one of the producers when the film took best picture. (https://nbcnews.to/3aFQq0k)

A Texas Woman was recently charged with a felony for not returning a VHS tape to an Oklahoma video store decades ago. (https://cbsn.ws/3xoiZJB)

An Oklahoma woman has been charged with felony embezzlement for failing to return a VHS copy of “Sabrina The Teenage Witch” that she rented in 1999. The woman moved from Oklahoma to Texas and when she tried to change her license, she found out she was a wanted criminal. (https://bit.ly/2QUqyqz)


AAA is reporting that gas prices went up another four cents a gallon last week, bringing the national average to $2.90. Americans were paying $2.03 a gallon this EXACT WEEK last year. (https://bit.ly/2S4SJnl)

Border Patrol Officers have seized more than $4 million in meth that was hidden in pickles. (https://cnn.it/3tSoTQU)

A new proposal in Florida would allow a student to record their college professors' lectures in order to use the information as evidence of political bias.(https://fxn.ws/3tUtguW)

A caught-on-video brawl erupted at Miami International Airport over airline seats, as two separate groups were filmed punching and kicking each other in the American Airlines terminal. (https://bit.ly/3eBa8LS)

A South Florida couple was caught trying to have a wedding in the backyard of a stranger’s mansion without permission. (https://bit.ly/3vaBZcr)

Pringles aren't actually potato chips. The next time you see a can of Pringles, take a closer look—you won't see the word "chip" anywhere on the packaging. That's because Pringles aren't made of thinly-sliced potatoes, but instead dehydrated potato flakes pressed into their signature parabolic shape. That's what makes them less greasy. But when other potato chip manufacturers complained, the Food and Drug Administration ruled that Pringles couldn't be marketed as chips. The company eventually settled on "potato crisp."

Police in Madrid have arrested a Spanish man who's accused of killing his mom and feeding her to his dog. (https://bit.ly/3gsoj8y)

Alleged ‘Uber monster’ Arna Kimiai has pleaded not guilty to all charges despite previously admitting to poor conduct in a meandering topless video on her Instagram last month. According to SFist, 24-year-old Arna Kimiai and her friend, 24-year-old Malaysia King, were both arrested and charged last month as the monster riders involved in the much-publicized March 7th assault on Uber driver Subhakar Khadka. A third passenger was present but she has not been identified nor charged. Khadka says he was assaulted by the pair after he requested that they put on a mask to reduce the risk of coronavirus. It ultimately led to the young women becoming belligerent, with video showing Kimiai performatively coughing on Khadka and ripping off his own face mask. Kimiai remains free on bail pending a May 3 hearing. She was arrested about a week after the video went viral on social media, having negotiated a surrender with authorities. Her account on the social media platform has since been deleted.(https://bit.ly/3n2hhZw)

A Florida nurse performed a butt injection on a patient while waiting for her virtual court hearing to start. Miami Herald reporter David Ovalle earlier Wednesday tweeted a picture of a man getting a butt injection from a female nurse during the Zoom court hearing. “MIAMI ZOOM COURT: We’ve reached peak 305. Someone appears to be getting a butt injection while appearing in a virtual hearing,” Ovalle wrote in his post, referring to Miami's zip code. “It's my understanding that the defendant was actually the nurse or whoever was giving the injection, which actually makes it a gazillion times more bizarre,” Ovalle said. The Miami Dade state attorney’s office issued a statement saying, “The case was on the court calendar, via Zoom, for a status hearing (also called a sounding). It seems that during the waiting period prior to the case being brought before the judge, Niurka Aguero was involved in some kind of procedure involving a male receiving an injection in the buttocks, which she appears to have inadvertently broadcast.” The Miami-Dade state attorney's office didn’t provide any more information on the defendant. (https://bit.ly/32B5zvF)

Dog Rescues Another Dog From Pool. The Pomeranian Was Treading Water For 34 Minutes https://www.sunnyskyz.com/good-news