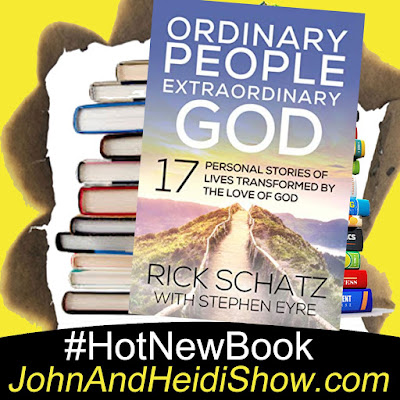 This weekend we visit with Rick Schatz, the author of Ordinary People Extraordinary God,17 true stories of everyday heroes. This book encourages believers with the reality that each of us is good enough and gifted enough to live our destiny and serve God in our own individual way.

A new study found that seeing your face in the mirror triggers feelings of pleasure. (https://bit.ly/3ewjQz3)

A man who broke into the Ohio Statehouse, smashed windows, and discharged a fire extinguisher told a 9-1-1 dispatcher he entered the building because he’d been shot at, according to a copy of the call released Tuesday. The man also said the person who shot at him was inside the Statehouse, according to the call. The Ohio State Highway Patrol says there’s no evidence of either claim. The man appeared to be under the influence of drugs and was trying to get medical help, the patrol has said. “I’m inside the state building. I broke in,” the man says in the 911 call, before asking for police to be sent. “Why did you do that?” the dispatcher asks. “Somebody just shot at me!” the man replies. According to a Columbus police radio log, the man appeared to be overdosing and Narcan, a drug used to reverse opioid overdoses. The 36-year-old suspect has been charged with vandalism and trespassing and is being treated at a downtown hospital. (https://cbsloc.al/3sjCfUT)

The man behind The Muppets, Jim Henson, will be the focus of an upcoming biopic called “Muppet Man.” (https://bit.ly/3awenHu)

Retailers are selling hyper-realistic muscular body suits that you can wear to appear fit without going to the gym. (https://bit.ly/3x4RvZn)

The Busch Beer company is looking to hire a dog as a taste-tester. (https://bit.ly/3xcYcII)

A stalker was arrested for trying to break into Taylor Swift's apartment after he said he believed Taylor was secretly communicating with him through her social media and music. (https://bit.ly/3n4Nqj7)

A Utah woman has gone viral after posting a video of herself swimming in a mermaid costume. (https://tinyurl.com/2x79ra7w)

Amazon is developing a new software that will allow customers to pay with their palm at Whole Foods. (https://reut.rs/3dDhDmk)

There's a giant fish with a transparent head. The deepest levels of our oceans are some of the least explored areas of the planet. Because of the extreme pressure, cold, and dark at these depths, only the very strangest of creatures can survive there. These include giant tube worms, vampire squids, goblin sharks, and viperfish with teeth so long that they can't close their mouths. Perhaps the strangest, though, is the barreleye, a large fish with a completely transparent head.

A hospital worker in Italy is under investigation for allegedly skipping out on work for fifteen years while continuing to receive a salary. The unnamed man, nicknamed the “King of absentees” by the Italian press, allegedly made $538,000 euros, which is around $647,000 American dollars. (https://fxn.ws/3xjULQO)

A College Station man has been charged after officers spent hours searching for him after he claimed to have been kidnapped. 19-year-old Vincent Oggero of College Station is charged with making a false police report. He allegedly told police it was all just a prank that he did with his friends. Officers were called to a restaurant in the Northgate District after the staff found a receipt with the phrase "I NEED HELP I Got Kidnapped" and a phone number. Police officers checked the name on the credit card receipt, as well as the other names on the receipts of those at the same table. Police said staff told them the table had left about ten minutes earlier. According to investigators, Oggero apologized for what he wrote on the receipt. He allegedly told them he had done it on his friend’s receipt just to “prank” him and police said he indicated he knew officers would respond. Oggero was formally arrested and charged on April 16th. He has posted a $5,000 bond and has since been released. (https://bit.ly/3tEP6lT)

A Florida woman is accused of duping at least ten people out of a combined $100,000 with the promise of healing their relationship woes through “witchcraft services.” The Spanish-speaking woman, named Rosalia, carried out her scheme from January through March after placing ads for her services in the Golden Gate and East Naples area. The ads, which promoted “spiritual/witchcraft services,” appeared in free Hispanic newspapers, radio ads, on local Hispanic radio stations. Flyers were also in laundromats and stores. “If you’re having an argument with your wife/girlfriend, she can help you with your problems,” the ads said. At least four of the victims gave Rosalia sums on money that she said she needed to cleanse, but never returned it. One man, who told police Rosalia said she saw something “dark” in life, forked over $29,500 so she could bless and multiply it. But, she told the man there was “darkness in the money,” and needed to cleanse it at her temple. After that, she stopped answering his message. The victim told cops he did not think she would steal his cash. (https://bit.ly/3sHNkiz)