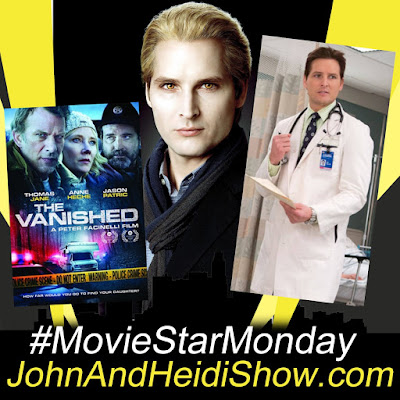 This #MovieStarMonday we visit with Peter Facinelli (Twilight/Nurse Jackie) about his new film THE RAVINE (opposite Eric Dane and Teri Polo) now available on Amazon. https://amzn.to/3mEyWpS or https://theravine.info/movie/

We'll also talk about his feature film THE VANISHED from 2020. (https://amzn.to/3dXbKiL)

A new study finds that regret and shame do not keep people from avoiding future one-night stands. Additionally, this same study found that men actually regret passing up on an opportunity for casual sex. (https://bit.ly/3us5kih)

A new study from Japan reveals that the more languages you speak, the easier it is for the brain to learn more. (https://bit.ly/3wz28U3)

A Border Patrol canine is being praised after preventing a large batch of fentanyl hidden inside burritos from being smuggled into the U.S. on Monday. A Yuma Sector Border Patrol canine sniffed out nearly 5 pounds of fentanyl pills that were stuffed inside the burritos at an immigration checkpoint near Palo Verde, California. The canine alerted its handler to pull a Chevy Tahoe over into the secondary inspection area. When the SUV pulled over, the canine led agents to a black backpack containing the laced burritos. The 37-year-old driver of the car was arrested. Border Agents said that he is a legal U.S. Resident. “Smugglers are under the false assumption that they can disguise drugs within food to throw off canines and their handlers,” Border Patrol said in a press release. “On the contrary, canines have the ability to detect a target odor among a myriad of other odors,” they added. Officials said the fentanyl had a street value of nearly $60,000.(https://bit.ly/2O9vgzH)

Just after the Easter holiday, it’s been announced that an animated feature based on the popular marshmallow candy “Peeps” is in the works.(https://bit.ly/3ww9NCi)

Monday, Paramount+ gifted Star Trek Fans with a series of panels and a streaming marathon of television episodes to commemorate #FirstContactDay, a nod to the 1996 film installment “Star Trek: First Contact.” (https://bit.ly/3sMj7jj)

The Royal Egyptian Mummies were relocated in a televised ceremony on Saturday that sparked fears that a curse could be unleashed. (https://bit.ly/3fHFEdw)

Mark Zuckerberg’s cell phone number was leaked online along with private details from 533 million Facebook Users after a group of hackers posted them on a website. (https://bit.ly/39JjUtX)

A couple who had sex while skydiving ended up in the hospital after the man opened his parachute too late. (https://bit.ly/3sQjTvL)

A new casino may be coming to New York City. (https://bit.ly/3uxaj1j)

The longest wedding veil was the same length as 63.5 football fields. When Maria Paraskeva, a woman from Cyprus, got married in August 2018, her goal wasn't just to say "I do." She was also determined to set a record. "My dream as a child has always been to break the Guinness World Record title for the longest wedding veil," she explained. She fulfilled her dream by wearing a lace veil that stretched 22,843 feet and 2.11 inches, or as long as 63.5 football fields.

A group of more than a dozen women gave residents of Dubai an eyeful when they posed naked on a balcony in a stunt that went viral. The women were arrested on charges of public debauchery in the United Arab Emirates, where violations of the public decency law carry penalties of up to six months in the slammer. (https://bit.ly/31JWOPk)

A Kansas woman wound up in cuffs after pretending she’d been shot as an April Fools’ prank. 58-year-old Arnthia Willis allegedly called her daughter Thursday, told her of the “shooting,” and then hung up. Alarmed, the daughter called 911 — prompting more than 15 cops to respond to Willis’ home in full protective gear with guns drawn and EMS in tow. Officers broke the door down, but found no one inside. They later learned that Willis was actually at work and had allegedly made up the shooting as a joke. The prankster was arrested on suspicion of an unlawful request for emergency service assistance. Police Lt. Ronald Hunt said that while April Fools’ jokes can be “good,” when police become involved, “it’s not funny anymore,” the Wichita Eagle reported. “This is a situation that is very dangerous,” he said. (https://bit.ly/31Ktkko)

Deputies in Florida arrested a man accused of stealing an ambulance from a hospital. The Hernando County Sheriff’s Office said deputies were called after the ambulance, owned by Hernando County Fire & Emergency Services, was taken around 12:30 p.m. Sunday from Oak Hill Hospital in Brooksville, Florida. Deputies said the ambulance crew was inside the hospital dropping off a patient when the emergency medical vehicle was stolen. 29-year-old Trey Cornwell is accused of driving the ambulance to Spring Hill, Florida, where he got it stuck in mud and sand as he drove toward a nearby body of water. He has been charged with grand theft auto and was taken to the Hernando County Detention Center, where he’s being held in lieu of a $10,000 bond. (https://bit.ly/3wtTaHG)