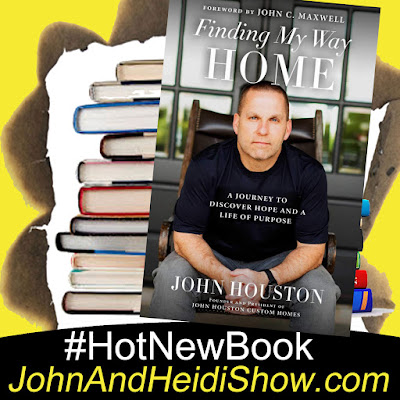 John Houston didn't have it easy growing up. From a young age, home was not a place where he wanted to be. His parents divorced, his mother moved out, his father remarried and moved in with his new family and John and his older brother began living by themselves at the ages of 11 and 15. The years that followed were both challenging and remarkable as John overcame hardships that could have permanently derailed his life to become a respected and successful business owner. In his new memoir, Finding My Way Home: A Journey to Discover Hope and a Life of Purpose.   AVAILABLE NOW - https://amzn.to/2RhAcUu

A new study shows that roughly half of Americans aren’t sure how much money is in their bank account. According to a recent poll of 2,000 people, 55 percent admit fear keeps them from monitoring their bank account as regularly as they should. (https://bit.ly/31xPgzh)

A new poll reveals that tacos reign as the food guaranteed to brighten up a bad day. (https://bit.ly/3rDMjYk)

A 25-year-old man is accused of backing his car into an Oklahoma City business and then telling police he meant to hit the neighboring vape store and marijuana dispensary to burglarize it. Police say John Lytle backed the vehicle into a shoe repair business and smashed everything in its path. The owner’s daughter, Claudia Enciso, said it’s a massive loss for her parents and their small business. “It’s pretty depressing and sad because they’ve been working very hard and they’ve been doing very well,” she said. The glass from the storefront was shattered and covered the inside of the business along with ceiling tiles and everything else inside. Lt. Isaac Goodman said they had to get Lytle out of the car and the store. He then told police he hit the wrong building. “He made some statements to officers after the fact that he had intended to burglarize the neighboring business, which is a smoke shop,” Goodman said. Lytle has been booked into the Oklahoma County Jail on charges of second-degree burglary and two counts of malicious injury to property. (https://bit.ly/3w4OSGr)

Armie Hammer has been dropped from his role in Cold War drama “Billion Dollar Spy.” https://www.dailymail.co.uk

Sharon Osbourne was reportedly paid millions of dollars to leave “The Talk.” (https://yhoo.it/39viDGy)

A life-sized bronze statue of Swedish climate activist Greta Thunberg installed at a United Kingdom university has sparked a backlash among students and critics who argue the money could have been better spent. The sculpture -- with a price tag of £24,000 (roughly $33,000) -- was unveiled at the University of Winchester in southern England. (https://fxn.ws/3rDnH1Z)

Three “dangerous” wildfires in the Black Hills of South Dakota have forced the evacuations of homes in the area. The wildfires also caused the shutdown of Mount Rushmore National Memorial. (https://bit.ly/3wbXdYV)

A Florida Mother was arrested after showing up at her daughter’s school wearing a boxing glove and fighting a 14-year-old girl. (https://bit.ly/3u4IYDi)

Originally built at the University of Pennsylvania's School of Engineering, in 1946, ENIAC weighed 60,000 pounds and took up a room larger than most studio apartments (1,500 square feet). Shortly after construction, ENIAC was sent off to the military, where it was used to calculate ballistic trajectories (translation: launch missiles) with frightening accuracy. Today, computer experts at Penn credit ENIAC with heralding in the "dawn of the information age."

Shipping experts say the blockage in the Suez Canal could lead to world-wide shortages of oil, gas, clothing, and food. (https://cnet.co/31wZ8ZX)

An enraged ex-Walmart employee crashed his car into a Concord, North Carolina, location, driving down several aisles of the store before he was stopped. Police said the terrifying incident unfolded at 6:00 am on Friday. The early hour meant there were no customers on site, but a number of employees — the man’s former colleagues — were in the store at the time of the collision. Incredibly, nobody was injured in the reckless incident, however there was significant damage to the facility. North Carolina shoppers kept pulling into the parking lot of the Walmart in the wake of the furious ex-employee’s vehicular assault, but were turned away. The store was closed for the day after it was transformed into a messy crime scene. North Carolina cops have identified the ex-employee as Lacy Cordell Gentry. FOX 8 reports that he’s currently in custody. The former Walmart employee is looking at felony charges from North Carolina authorities. These include assault on a government official with a deadly weapon, and breaking and entering. Gentry has also received misdemeanor charges. (https://bit.ly/3sWJgvS)

A Naples woman was arrested for allegedly firing multiple shots into her husband’s truck. 45-year-old Lara Love is facing a felony charge after her husband told deputies she shot up his vehicle with a handgun just before 12:00 p.m. while four children were inside the home. The husband told investigators he and Love have been separated for nearly two years but still live together in their Golden Gate Estates home with their four children. Deputies said an argument over the husband getting home late led Love to shoot a 9mm handgun at her husband’s vehicle multiple times. When authorities arrived, they said they overheard Love telling one of her children to take her gun and put it in the truck. The 45-year-old was taken into custody by the Collier County Sheriff’s Office. She is facing a charge of shooting a missile into a vehicle. (https://bit.ly/39Gj1lW)