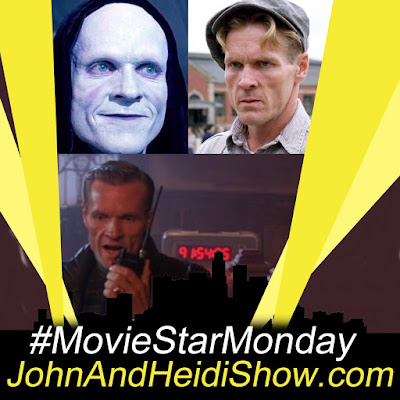 This #MovieStarMonday we visit with William Sadler, known for his roles in Die Hard 2 , Bill and Ted's Bogus Journey, and he JUST reprised his role as “Death” in BILL AND TED FACE THE MUSIC, The Shawshank Redemption, Tales from the Crypt: Demon Knight etc, etc. He is also a television star, appearing in such sitcoms as Roseanne and Murphy Brown etc. Sadler also starred as Sheriff Jim Valenti on the WB science fiction television series Roswell.

A new study finds that some people can feel drunk off one drink because alcohol really does go straight to your head. (https://bit.ly/2Pddhcd)

A survey by Dating.com found that “Dad Bods” are the most popular body preference amongst single people. (https://bit.ly/3w9wFY4)

A suspected drug dealer in California was really flying high – allegedly using a drone to deliver heroin. 51-year-old John Thomas Piani of Simi Valley was busted Friday, with police posting a photo of the unmanned aircraft they found on him, complete with what appeared to be a small quantity of drugs. “Seemed like a good idea,” Simi Valley police wrote on Instagram. “It wasn’t … Heroin sales, even in Class A-G airspace, is heroin sales. Found this gem on a suspected heroin dealer.” Piani was nabbed during an investigation by narcotics detectives and homeless liaison officers into alleged sales of heroin and methamphetamine. Officers then found that he was operating a drone as he was arrested and “suspected heroin” was found attached to the unmanned aerial vehicle. Piani was booked into Ventura County Jail on two felony counts of possessing a controlled substance for sale and one count of controlled substance possession. (https://bit.ly/3cbpsPe)

In her new memoir, Sharon Stone said she had a “wonderful” time working with Woody Allen. Stone said, “He was extraordinarily encouraging to me and I was a young woman, 19, when I started working with him.” (https://bit.ly/3vW5yQd)

In a new interview, Woody Allen says his celebrity friends have distanced themselves over sexual allegations against him. (https://fxn.ws/31ubwKe)

Johnny Depp has been denied the right to appeal a UK ruling that he assaulted his ex-girlfriend Amber Heard. (https://pge.sx/3d3wzst)

Will amusement park operators really be able to stop thrill riders from screaming? A few parks in the world have reopened or plan to with a strict “no screaming” policy — the idea being that screams are big exhales that contain germs and viruses like, possibly, COVID-19. Can you really get people on a roller coaster to not scream? They tried it five years ago in the UK. Riders of The Big One at The Big Sheep amusement park in the U.K. were told to tone it down to avoid upsetting those who live close to the park. The Big One’s opening (the ride is now called Rampage) followed a five-year battle over planning permissions with local residents who reportedly complained that the new ride would be “intrusive.” The coaster was being promoted as one of the “biggest, highest and longest” but a sign that appeared at the ride’s entrance read: “This is a family ride — not a white knuckle thrill ride. Enjoy the views but we love our neighbors. PLEASE DO NOT SHOUT OR SCREAM!”

As if the pandemic hasn’t caused enough headaches, it turns out working from home has not been glitch-free either. The average remote worker has experienced 230 tech problems while doing their job from home over the past year, according to a new study. That just over four tech headaches a week.

According to a small study, the number one thing we do on our smartphones — after texting — is, well, pretty boring. It’s… checking email.

A study shows that when dogs and their owners stare at each other the love hormone oxytocin is released meaning that people can feel just as strongly about their dogs as they do about relatives.

Space smells like seared steak. When you see footage of astronauts floating peacefully in space, do you ever wonder, What do space smells like? Well, according to some former astronauts, space does have a distinct odor that hangs around post-spacewalk. They've described it as "hot metal" or "searing steak."

Police in Poland said a burglar who broke into a restaurant to cook and eat dinner was apparently not hungry for cash. The intruder broke through an exhaust fan in the back of the restaurant and made a meal. He pulled out a plate, got some chicken out of the freezer, got a box of rice, then fried up the chicken and rice in a frying pan. After he ate, he left. The burglar didn’t touch $200 left in the cash register.

Doctors and nurses are used to dealing with all manner of injuries and ailments. And medics in Turkey were recently presented with a man who had a ladder sticking out of his head. Erkan Kacar, from Ilkadim, Samsun, was planning to do some renovations on his house when he suffered a little mishap. The 43-year-old was reportedly stretching for some tools on a high shelf, and when he grappled for his gear, the ladder fell on his head. It caused a sharp spike from the three-step ladder to become lodged in the top of his head. Unable to remove it, Mr Kacar called for an ambulance to come and get him loose. However, they too were unable to remove the sharp protrusion, so Mr. Kacar had to be taken to hospital with the ladder still attached to his head. Fortunately, though, the bumpy journey to the hospital caused the ladder to come loose, and Mr Kacar was finally able to free himself. Despite having been freed from the ladder, however, Mr Kacar was still taken to hospital to be checked over. He was discharged later and is said to be in good health. (https://bit.ly/3fn2Ttg)

A Houston tax preparer faces assault and robbery charges after she brandished a gun at a disgruntled customer and stole the cellphone of another filming the altercation. 46-year-old Latunya Wright was arrested and charged with two felonies after Harris County deputies responded to a disturbance at MZ BIZ Tax Services. Wright allegedly got into a verbal altercation with a customer “that turned physical.” “Investigation revealed that she struck the victim with a firearm that she brandished during the altercation,” the police precinct said. The criminal complaints allege Wright threatened a man with “imminent bodily injury” by displaying a firearm and also injured a woman and exhibited a firearm while stealing her property. The woman named in the charging documents, Marquita Boyle, shared cellphone video she took of the incident with Houston ABC station KTRK. Boyle told the station that she started recording after Wright allegedly pulled a gun on a customer who was complaining about the tax return she filed for him. Wright was arrested and booked into the Harris County Jail.