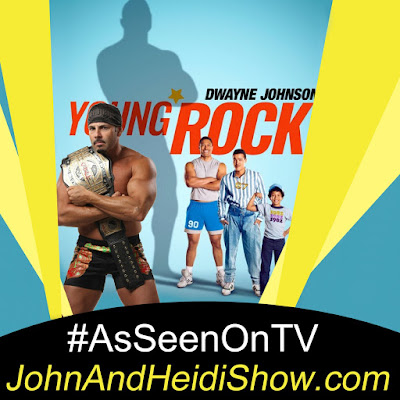 Today we visit with WWE Superstar Chavo Guerrero Jr. He's helping with the crew of Young Rock on NBC to make sure the wrestling is authentic! He's an amazingly talented man from a super famous wrestling family!

A study by Northwestern University found that eating breakfast before 8:30 in the morning may lower your chances of diabetes. (https://bit.ly/3cRXxTH)

A new study finds that couples who play together, stay together. Researchers in Germany say being playful with your loved one can influence how happy you feel with your sex life. Researchers suggest that a person’s playfulness can help with reducing conflict and the monotony of daily life. (https://bit.ly/3cubtV8)

An Indiana man was arrested after he was found passed out in his vehicle while three children were in his hotel room with a loaded rifle. 40-year-old Michael Shacklee of Haute, Indiana was passed out in the driver’s seat of his vehicle at the Rodeway Inn off US-19 when deputies approached him just before midnight. Deputies said Shacklee was slurring his speech and smelled like alcohol when he told them he couldn’t remember his hotel room number. His room was about 25 feet away from his parked car, deputies said. Investigators then noticed an AR-15 style rifle laying on an army duffel bag that was “clearly visible” through the window of the hotel room. Hotel staff said a man and a woman were arguing and were yelling about the rifle in the room. The woman told deputies she received a text message saying Shacklee was drunk again and the children needed to be picked up. Deputies did not specify Shacklee’s relationship to the children. Investigators discovered the rifle had a loaded magazine in it. (https://bit.ly/3vVnPxb)

Tiger King Joe Exotic and his husband Dillon Passage are getting divorced. Joe Exotic sent an email to People Magazine saying they’re not in a rush to legally separate. (https://bit.ly/3dbb357)

Elizabeth Hurley has taken to Instagram to set the record straight about her and son Damian's future – confirming that recent reports of a reality TV show are false. (https://bit.ly/39o7Kqi)

Sharon Osbourne has left “The Talk” after an inquiry into controversial statements she made backstage. Sharon got in trouble for sticking up for Piers Morgan after he said he didn’t believe Meghan Markle and quit “Good Day Britain.” Sharon Osbourne was also a judge on “The X Factor” as well as “America’s Got Talent.” (https://bit.ly/39ElMnR)

The City of Los Angeles voted 12-0 to RE-FUND the police after crime surged when they cut the police budget over the summer. Robberies were up like 387% (https://bit.ly/39mp52M)

Angered that the mother of his son got him a Quarter Pounder instead of a Big Mac from McDonald’s, a Minnesota man allegedly argued with the woman before throwing her to the ground and then swiping money from the victim’s purse. Responding to a flurry of 9-1-1 calls about a disturbance Sunday night at a residence in Mankato, a cop was told by the victim that she was assaulted by Mohamed Aboubaker, a Minneapolis resident with a lengthy rap sheet. According to a criminal complaint, the 39-year-old Aboubaker “was visiting for the last few days” with the victim. The woman told police that Aboubaker was upset because she got him “a Quarter Pounder instead of a Big Mac from McDonald’s.” An argument ensued and Aboubaker allegedly “threw her to the ground against the dresser.” The woman said that “her son was in the room and was screaming while this occurred.” The victim said that after Aboubaker went into the kitchen and removed money from her purse, she confronted him and sprayed him with a can of “Mace,” which actually was hornet spray. Aboubaker fled the home, but was subsequently apprehended and charged with a pair of misdemeanor domestic assault counts. (https://bit.ly/3sm6Bqp)

Pigeons can tell the difference between a painting by Monet and Picasso. In a 1995 study published in the Journal of Experimental Analysis of Behavior, researchers reported being able to train pigeons to discriminate between paintings by Claude Monet and Pablo Picasso when shown slides of their works that they had previously never seen before. When the Picasso images were inverted, the little art connoisseurs could still tell it was a Picasso.

North Korea fired two short-range missiles off of its east coast, a U.S. official confirmed to Fox News. The test was likely part of North Korea’s research and development, as they try to advance their weapons systems and also test the Biden administration. (https://fxn.ws/39fx01B)

An Orem, Utah man is facing a wide range of charges after police say he stole pizza and breadsticks from a Little Caesar's restaurant, threatened to slit the throat of the manager when confronted, and led police on a high-speed chase all over the city. According to police statements, 30-year-old Richard Pratt Heilbut ordered food at the Little Caesars and became angry that he had to wait because the store was very busy, with a line out the door. After a few minutes, Heilbut walked behind the counter, grabbed two pepperoni pizzas and two breadsticks, and left the store saying; “I'm helping myself.” Officers were eventually able to stop Heilbut in his Chevy Malibu after he attempted to evade arrest. Police say during their search of the Malibu, they found meth and a glass pipe that tested positive for meth residue. He faces a laundry list of charges that include robbery, felony commercial obstruction, and failure to stop at the command of police. (https://bit.ly/39ptMJc)

MOMENT OF DUH: Brought to you by RadioTravelGroup.com

An altercation between parents outside Matthew Gilbert Middle School on Jacksonville’s Eastside ended when police were called and one of the adults was charged with possession of a gun on school property. The school was on Code Red lockdown during and immediately after the 10:30 a.m. altercation, which officials said involved adults were confronted in the parking lot by the woman after an appointment with the principal. Duval County School Police and the Jacksonville Sheriff’s Office were called. According to a police report, 31-year-old Moenika Ellis got into a fight with three other parents in the parking lot. It says that Ellis went to her car and came back with a gun. She then got into the car and was attempting to drive away when she was stopped by police. Ellis never pointed the gun at anyone, but did resist arrest. She was arrested on charges of possession of a firearm on school property and resisting an officer with violence. (https://bit.ly/3ry4z5k)

Volunteers Pick Up 15,700 Pounds Of Trash From The Tennessee River In 2 Days
https://www.sunnyskyz.com/good-news