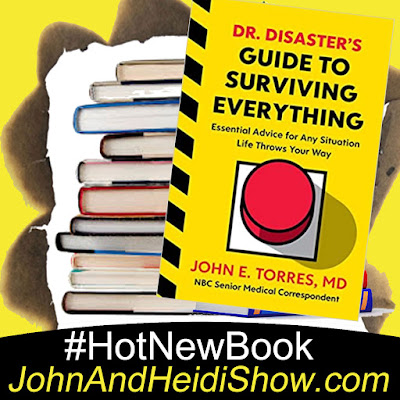 Today we visit with NBC/MSNBC Senior Medical Correspondent, Dr. John Torres, MD/ He has a new book out called “DR. DISASTER'S GUIDE TO SURVIVING EVERYTHING: Essential Advice for Any Situation Life Throws Your Way.” https://amzn.to/3g4Y7k9

National Reach as High as You Can Day

Look Up at the Sky Day

According to a new study, it turns out that mice also engage in social distancing when their mates get sick. Neuroscientists from MIT say mice have a brain circuit that stops them from mating with other rodents that appear to be unwell. (https://bit.ly/3cOsbi8)

A new survey found that 40% of Americans don’t recognize themselves in the mirror due to stress. (https://bit.ly/3wu0vXt)

When Louisiana cops yesterday found a “clear crystal-like substance” inside a plastic Walmart bag in his pocket, John Combs did not, like some suspects, claim it was a laxative or sugar and corn starch to use in baking a cake. No, the 47-year-old Combs explained to police that the substance was “salt which he had to treat an in-grown toenail.” Turns out it was methamphetamine. After spotting Combs--who was carrying a large wooden stick--walking in the middle of a West Monroe roadway around 4:25 a.m., a cop asked Combs to put down the stick and then “patted him down for any more possible weapons.” During the frisk, Combs reportedly sought to keep the patrolman from searching a pants pocket. While home remedies for an ingrown toenail can include soaking the foot in a warm Epsom salt bath, the cop who examined Combs’s purported salt “identified the substance as methamphetamine.” Combs was arrested for possession of a controlled dangerous substance. He was booked into the Ouachita Parish jail on the felony charge. (https://bit.ly/3wiesrx)

Mossimo Gianulli was released from prison two weeks early to bring the college bribery scandal to an end. (https://pge.sx/3cKPRDX)

Last Saturday’s date of 4/3/21 drew extra-long lines at Vegas wedding chapels from superstitious couples looking to get married on the peculiar date.(https://bit.ly/3duQ7X2)

Miami Beach could be on the verge of ending the city’s famous 5:00 a.m. last call. (https://bit.ly/3rOHQlU)

A massive fire broke out at a Chicago recycling plant. (https://abc7.ws/3fJeMKc)

Amazon issued an apology and admitted that some delivery drivers are often forced to pee in bottles because of demanding shifts that leave them no time for breaks.(https://bit.ly/2PTF0if)

Bees sometimes sting other bees. Bees are notorious for their stings, but humans aren't the only ones who experience this pain in the neck (or the arm, or the leg…). In protecting their hives from outsiders, some "guard bees" will stay by the entrance and sniff the bees that come in, says Marianne Peso from the biology department of Macquarie University. If there's a rogue bee from another hive trying to steal some nectar, the guard bee will bite and even sting the intruder.

Russian President Vladimir Putin signed a law allowing him to potentially hold onto power until 2036, a move that formalizes constitutional changes endorsed in a vote last year. (https://fxn.ws/31PGdcT)

A reporter in Moscow had her microphone stolen by a dog on live TV. (https://7ny.tv/31NoanQ)

A man who was performing Botox treatments has been arrested and charged with practicing or attempting to practice medicine without a medical license. Director Mike Bruno, with the Sheriff’s Office, called it “one of the most bizarre cases” he’s come across in his career during a news conference. Bruno said the Sheriff’s Office received a tip from another law enforcement agency that Nelson Turin was performing Botox treatments without a medical license and without the appropriate state certifications. According to Bruno, a detective who was posing as a client during a on March 12th visit went into the spa on San Jose Boulevard to talk about a Botox treatment. During a consultation with the detective, Bruno said, Turin was seen consuming alcoholic beverages. Bruno said Turin set up an injection kit, used a marker to identify different areas for an injection and prepared to perform a treatment. “That’s when our other detectives came in and stopped him where he was and he was arrested prior to doing any of the services on our undercover officer,” Bruno said. (https://bit.ly/3md2WsT)

A Brevard County man riding his motorcycle at more than 100-mph while weaving in and out of traffic told deputies his need for speed was okay because “he was trained to drive like that.” Brevard County deputies said they spotted 65-year-old Charles Thomas of Malabar, on his motorcycle around 10:00 a.m. traveling at speeds over 100-mph on U.S. 1 southbound approaching Malabar Road. According to the arrest report, Thomas then turned west on Malabar Road, passing cars in a no passing zone into oncoming traffic. When authorities caught up with Thomas, he told the arresting deputy, “He is trained to drive like that and he will do it anytime he is in a hurry.” The report does not disclose what type of motorcycle training Thomas alleged he had. Thomas was arrested and charged with misdemeanor reckless driving. According to Brevard County Jail records, his bail was set at $500. (https://bit.ly/3mfa8Vs)