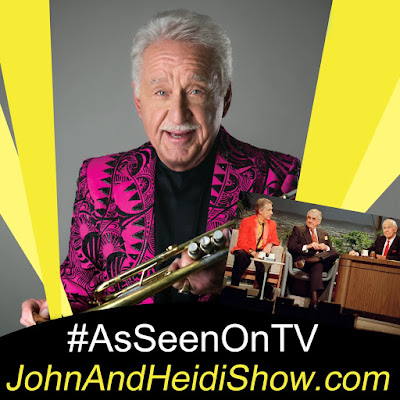 So excited to visit with Doc Severinsen. After more than 30 years as the colorful bandleader of The Tonight Show Starring Johnny Carson, master trumpeter Doc Severinsen continues to defy nature well into his 90s with a grueling schedule of touring, performing and teaching. An engaging new documentary, American Masters – Never Too Late: The Doc Severinsen Story, traces the life and groundbreaking career of the unstoppable musical icon, revealing his personal trials and underscoring a remarkable journey of inspiration and obsession. American Masters – Never Too Late: The Doc Severinsen Story premiered nationwide Friday, April 2 on PBS (check local listings), pbs.org/americanmasters and the PBS Video app.

A new study conducted by researchers with The Physiological Society say that just fifteen minutes of high-intensity exercise improves heart function. And you can do these exercises at home. These researchers say that high intensity interval training, known as HIIT, isn’t just another exercise fad. (https://bit.ly/3xbOG8D)

A new study shows women are more likely to experience “Zoom Fatigue” from too much video conferencing. (https://bit.ly/3xdapgL)

Video of a booze-fueled job site stripper party in Milton, Ontario posted to social media has cost a group of drywallers their jobs. The series of videos depict the men — now-former employees of Concord-based Nelmar Drywall Co. Ltd. — drinking and partying with a semi-nude woman inside of a home under construction. Despite the pandemic and regulations regarding PPE, nobody in the video is seen wearing a mask. In the videos, the men are seen dancing with the woman, grabbing and suckling her breasts, drinking and pouring vodka on her, lying down while she dances on top of them, and performing cunnilingus on her. In response to the Sun’s inquires, a letter from Nelmar’s attorneys said their clients denounce the actions in the video, and that the participants depicted in the video were no longer employed with the company. (https://bit.ly/3sBaIyt)

The $0 Blockbuster
Perhaps no image captures the preposterousness of the last year for movie theaters than the box office chart for June 10, 2020. On that day, a Wednesday, a movie called Unsubscribe topped the US charts with $25,488 in gross earnings, beating out several other movies that were shown at drive-ins.

Like dogecoin, Unsubscribe started out as a joke and eventually became a real thing. When theaters were shut down last spring, two former BuzzFeed employees, filmmaker Christian Nilsson and YouTuber Eric Tabach, looked at the box office charts and saw movies were making the leaderboard with miniscule ticket sales—$9,000 here, $15,000 there.

"Nothing big was coming out. Blockbuster films were on hold. I wanted to find a way to get the biggest number," Tabach told the BBC.

Look...if you had one shot...or one opportunity….

With Christopher Nolan and Michael Bay mostly out of the picture because of the pandemic, Nilsson and Tabach devised a plan to conquer the box office. They shot the 30-minute horror movie on Zoom with an official budget of $0.

Then, for the movie to actually generate ticket sales, they rented out a local movie theater, the Westhampton Beach Performing Arts Center in Long Island, in a process known as "four-walling." Four-walling is essentially the self-publishing of the film world—you pay to rent out a theater but get to keep all the proceeds yourself.

No one attended the movie besides Nilsson and Tabach, but after three screenings of Unsubscribe, they managed to pay enough money to themselves for the movie to top the box office.

Google Android phone users will be tripping and falling a little less. Android’s Digital Wellbeing service is getting a new “Heads Up” feature, which will prompt users to stop staring at their phones while walking. If you’re walking while using your phone, you get a reminder to focus on what’s around you. The reminders include brief notifications with instructions like “Watch your step,” “Stay alert,” and “Look up.”

Advice from experts says if you decide to have an alcoholic drink, limit yourself to one a day.

What time is it? It’s Fat O’clock! Fat O’clock is the time when we ditch our diet and start eating comfort food and, according to research, that time is 7 PM on Sundays. Almost half in the study fell for comfort food between 7 PM and 10 PM on Sundays. Another dangerous time for your diet is between 3 and 5 in the afternoon. Between 5 and 7 PM was the third most popular time to abandon your healthy snacks and go for something good.

A study reveals parents-to-be agonize up to 45 hours over the name of their unborn child.

A pharaoh once lathered his slaves in honey to keep bugs away from him.

The pharaohs of ancient Egypt were believed to be literally divine. The word pharaoh itself means "great house," as in the house of God. In fact, King Pepi II, who supposedly ruled for 90 years, thought so highly of himself that when he was bothered by insects, he would command that one of his slaves be covered in honey to lure the flies away from himself.

A high-tech robot shown walking, talking, and dancing during a televised Russian robotics event has turned out to have actually been a human wearing a robot costume. (https://bit.ly/3v5lhv3)

A truck spilled what has been described as a load of “entrails” on a Queensland highway. Images have been posted to social media showing a pink substance on the Mount Lindesay Highway in Jimboomba, south of Brisbane. A Facebook user who posted an image of a truck partially covered in the substance said there were “entrails everywhere.” “It’s horrific,” she said on a Jimboomba community group, also warning people to avoid the highway at the Camp Cable Road intersection. The Queensland transport department has described the substance as “offal”, while the Courier Mail reports it is “chicken guts.” The department has warned southbound lanes towards Cedar Vale are “affected” by the spillage. It said a specialist waste management company is helping to undertake the clean-up. (https://bit.ly/32voqrR)

A group of Italian government officials are under investigation for feasting on a lunch of wild songbirds — including some that were a rare species. Carabinieri officers busted the lavish meal, which also defied COVID-19 guidelines, and found the illegally hunted creatures on the menu. The banquet secretly held in a government building near the city of Brescia included rare tiny birds such as hawfinches and red crossbills. Chaffinches, goldfinches, siskins and bramblings were also ready to be devoured. Around 20 public officials from the villages of Valle Trompia and Gardone Val Trompia had been in attendance at the lunch, the outlet reported. In addition to possibly breaking wildlife protection and hunting laws, the group is being investigated for violating coronavirus lockdown rules, which prohibit gatherings of more than a few people. Italy’s National Association for the Protection of Animals slammed the group for acting above the law. (https://bit.ly/3x3XkWO)

A Guy On Twitch Playing Guitar For Zero People Had His Stream Raided By Crypto People, Ends Up With Over $85,000 https://www.sunnyskyz.com/good-news/