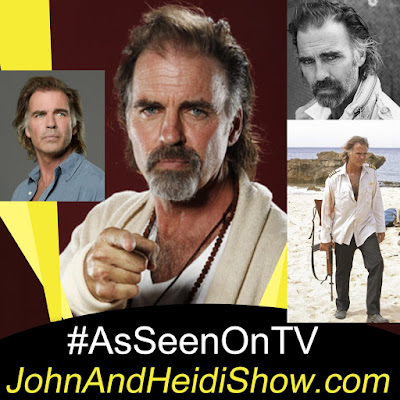 Today we visit with Jeff Fahey (Lost, The Marshal, Silverado, The Lawnmower Man, Machete & many more)

We'll talk about his new action thriller, LOCKED IN, starring Mena Suvari and Jeff Fahey. The film is in select theaters, Digital & On Demand. https://amzn.to/3tI7B8l

A new study discovered a Dinosaur called the “Shuvuuia” that looked like a giant chicken and hunted prey in the darkness. (https://bit.ly/33vuSiZ)

A new study found that children who grow up around nature have a lesser chance of developing ADHD. (https://bit.ly/33woiZL)

A poll found that over half of those asked would rather have a man drive than a woman.

Pennsylvania Attorney General Josh Shapiro announced charges against a Northampton Borough couple after finding nearly $1 million in drugs and dozens of guns in a home. Shapiro released the arrest warrants for Christopher Weikert and Tara Gallucci who are now facing a slew of charges including Possession of Controlled Substances, Drug Paraphernalia, and Prohibited Firearms. Agents from the Office of Attorney General’s Bureau of Narcotics Investigation executed a search warrant on the couple's home earlier this week, where they found 21.5 pounds of methamphetamine and 1,275 doses of fentanyl with an estimated street value of $972,475. In addition, authorities also seized six ghost guns, four assault rifles, three handguns, and various ghost gun parts, along with Nazi paraphernalia. "These traffickers were also carrying ghost guns, which are quickly becoming the weapon of choice for criminals and fueling the gun violence epidemic,” Attorney General Shapiro said in a statement. (https://bit.ly/3tfhD0j)

“Star Wars” director JJ Abrams is selling his Pacific Palisades Home for $22 million dollars. He bought the house in 2014 for $14.5 million. (https://bit.ly/3eQo3xL)

Ben Affleck reportedly sent a video to a woman asking why she unmatched him on a dating app. (https://fxn.ws/3thUeeI)

Leonardo Davinci’s “Head Of Bear” drawing is expected to fetch $16 million when it goes up for auction in the UK this July. (https://reut.rs/3bdJYOw)

Vanessa Hudgens revealed that she made the first move on her boyfriend, Cole Tucker. (https://pge.sx/3ey26ow)

Coldplay front-man Chris Martin says the lockdowns caused him to reevaluate fame and he’s no longer hung up on being a pop-star. (https://bit.ly/3tDxkPm)

Meghan Markle is publishing her very own children’s book! (https://bit.ly/3nU71mx)

Meghan Markle has written a children's book about families.(https://fxn.ws/3nP8jPL)

New York City public schools have announced that all future snow-days will be replaced with remote learning days. (https://cnn.it/3bgse5)

A new report claims Bill Gates used to pay strippers to come to his home and swim naked. (https://bit.ly/3vXUaTk)

Our European ancestors were cannibals. In 16th and 17th century Europe, cannibalism was actually a fairly common practice, and it was all for medical purposes. The practice seems to have started because Egyptian mummies were thought to have magical curative properties—so they were ground up and put in many remedies. As the idea evolved, human bone, blood, and fat were all used in medical concoctions. Got a headache? Crush a skull and make it into tea! While medical cannibalism has fallen out of favor, modern medicine still sometimes uses one human body to heal another in the form of blood donations, organ transplants, and skin grafts.

British Prime Minister Boris Johnson gave the green light for “cautious hugging” after months of strict restrictions as he set out the next phase of coronavirus lockdown easing in England. Johnson also said that it’s now okay for pubs to serve pints inside. (https://reut.rs/3vPhW3M)

According to the Sanford Police Department, a man is accused of attacking his family with a samurai sword. Police found Gary Campbell pacing in front of his home on Spanish Bay Drive after receiving a 9-1-1 call for medical assistance. When deputies went inside the home, they found Campbell’s mother, father, and sister suffering from wounds. According to police, all three were transported to the hospital. Detectives said Campbell used a katana sword, which is a kind of Japanese sword wielded by samurais. Based on interviews with Campbell, detectives said they believe he intentionally attacked his family. Officers arrested Campbell, who is facing charges for two counts of attempted first-degree homicide and one count of aggravated battery with a deadly weapon. Anyone with information on this incident is asked to contact the Sanford Police Department or Crimeline. (https://bit.ly/3ebyDAh)

This bizarre mystery has police scratching their heads and rubbing their tummies. Instead of following bread crumbs the Mayfield Heights police department are following a trail of candy wrappers. Apparently, a woman had a sweet tooth and sticky finger…A woman reportedly stole 84 Reese’s Peanut Butter Cups and two 12-packs of beer from Circle K around 6:45 a.m. in late April. This is where the plot gets thicker than peanut butter. The police were able to track down the candy klepto getaway car. The Cleveland woman who owned the car involved in the alleged butter cup caper said she gave an acquaintance a ride to the Circle K on the day of the convenience store crime. She then dropped the mystery woman off in Euclid, Ohio where a mystery man picked her up. The woman's identity is unknown at this time and local law enforcement is investigating. So, if you know a woman in the Euclid, Ohio area who smells like Reece's Peanut Butter Cups and beer please contact the Mayfield Heights Police Department. (https://bit.ly/3xTQ6oE)